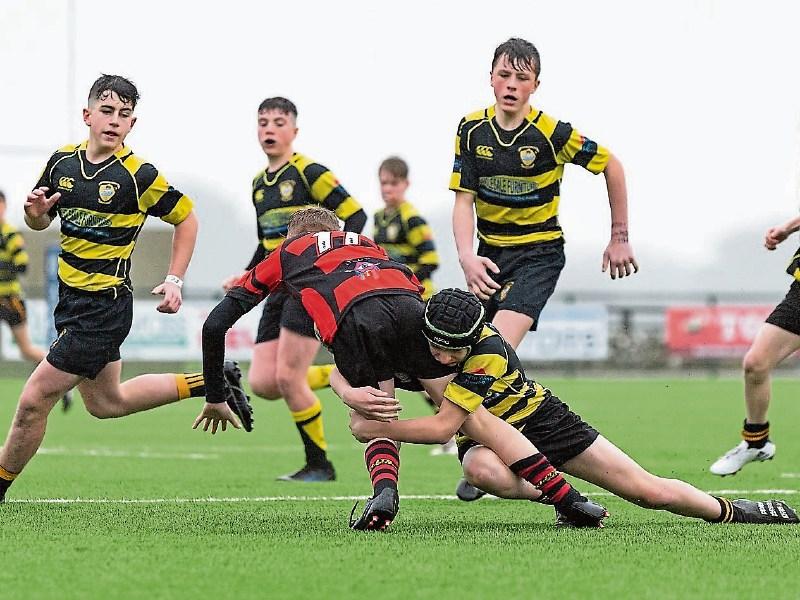 Carrick on Shannon U14s are Connacht B League champions after a scintillating display in defeating Monivea by a scoreline of 29-0 at Creggs RFC last Saturday.

Carrick went all out from the start, tackling like terriers, scrummaging superbly, contesting and winning Monivea line outs.

The match started with both teams hoping to settle early but it was Carrick that scored first after 12 minutes when Sean McGreevey counteracted the Monivea drift defence by running a straight line offloading to Ronan Connolly to touch down. Jack Moolick converted.

Carrick kept the pressure on Monivea, not allowing them any time on the ball with some great rucking, mauling and front up tackling. With nowhere to go playing the ball by hand, Monivea decided to kick the ball high into the Carrick half but each time the high ball was fielded superbly by the Carrick backs who then counter-attacked.

After more sustained pressure, Carrick were very close to the line before Iarlaith Martin picked up from the back of a ruck and went over for a second try. Shortly after Jack Moolick converted a penalty which left the scoreline at 15 nil at half time.

Try as they might, Monivea came out in the second half knowing that they had to score next if they were to stay in the match but the Carrick defence remained steadfast.

Carrick's third try was a peach when, with the Monivea back line defending well but too far up, Charlie Slevin caught them flat footed by kicking through a lovely ball for Alex Copley to run on to and collect and touch down. Moolick added salt by converting the try.

Carrick then sealed the match with a fourth try by Alastair Hewson, converted by Moolick which left the final score at 29-0. In the end Monivea had simply no answer to the Carrick team performance and full credit must go the their head coach Aenghus Martin in having the team fully focused and motivated from the start ably assisted by his assistants Padraig Gleeson and Seamus Connolly.

As for this U14 squad they are an outstanding group of young men who showed manners, strength and determination throughout the whole League campaign. Last Saturday was the apex of an effort, the new challenge is around the corner, they are equal to it.

Well done Carrick U14’s, the first time the Club has won an underage Connacht competition. They are the history boys, our privilege to know them, their privilege to defend it.