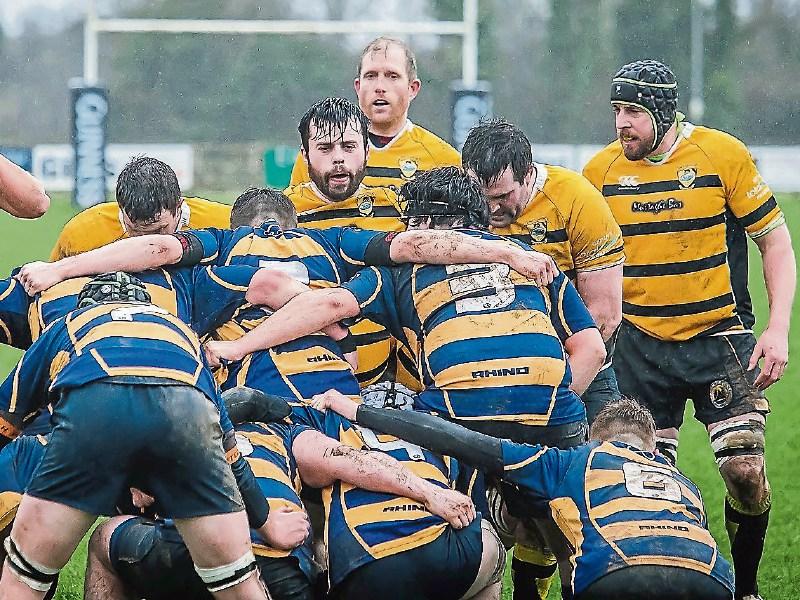 Scrum time as the Carrick pack faces up to their Ballinasloe opponents Picture: Mark Kelly

Carrick RFC recorded a hugely impressive win over Ballinasloe RFC last Sunday which puts them in contention for the League play-offs.

On a wintry afternoon, Carrick RFC avenged their recent loss to Ballinasloe RFC with a thrilling win at the Castlecarra Road grounds. Carrick selected to play with the fierce wind which saw the home side dominate proceedings with Peter Lavin and Captain Shane McGuinness carrying the fight to the visitors.

Ballinasloe were under significant pressure against the powerful scrum of the Carrick men and on 22 minutes, No 8 Darrach Paterson made a huge carry into the heart of the visitors defence and scrum half Ruairi King elected to use his forwards close to the Ballinasloe line and a huge surge saw Denis McCafferty crash over to the delight of the local support.

Unfortunately, Conor Glancy failed with the extras which left Carrick five points to the good at half time.

With weather conditions deteriorating at the start of the second half Carrick came under major pressure as Ballinasloe used the high wind to target the Carrick men’s back three. Unfortunately Carrick lost the influential Gavin Kelly to an ankle injury and the veteran Dermot Foley also had to leave the field.

After a penalty award Ballinasloe elected to take a straightforward three points which left only two points between the sides as the game entered the final quarter.

With Carrick under increasing pressure the defensive effort of the home side was outstanding with Sean Hynes and Brendan Flannery leading the defensive rear action. With time up, Ballinasloe were awarded a penalty just inside their half. With the crowd duly silent, the kick looked to be sailing over only for the ball to drift left to the delight of the home side and supporters. The referee blew the final whistle for a brilliant 5-3 victory for Carrick.

Carrick play Corinthians at home this Sunday at 2.30 and a win would give Carrick a home semi final in the play-offs.