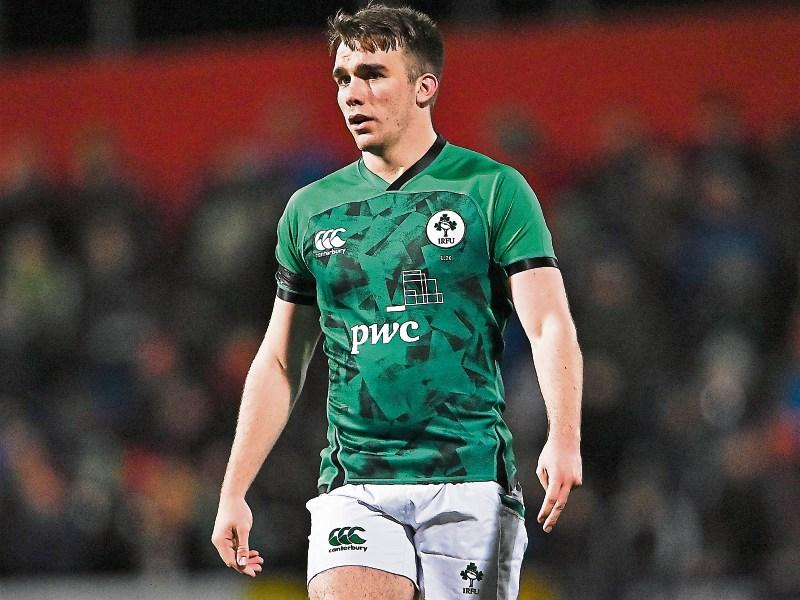 Congratulations to Longford RFC’s Shane Mallon who started on the left wing for Ireland U20s on Friday night, played in Musgrave Park, Cork, where they crushed Wales U20s 53-05 in winning by a record margin.

Unfortunately, most of the play went down the right wing so Shane did not have any chance to get among the try scorers. However, he put an impressive all round performance especially defensively where he secured four turnovers and made some crucial last ditch tackles.

A memorable moment was a kick and chase up the wing where he then secured a turnover penalty from the Welsh player who had gathered his kick ahead.

Everyone in Longford RFC was glued to RTE 2 and were exceptionally proud of Shane and look forward to seeing get more game time across the Six Nations.

A far tougher task awaits Ireland this weekend as they travel to France. Ireland U20s play France on Friday at 8 pm in Marseille. Fingers crossed that Shane gets more game time and we can all enjoy watching Shane again!

Longford came away from a crucial Division 1B clash showing nothing for their efforts, despite giving their all as they lost out 22-8 to Tullow on Sunday.

The clash was crucial for the wrong reason in that after the loss Longford are firmly in possession of the relegation/ promotion playoff place with two matches still to play. Things looked so differently earlier in the season with Longford running in five tries, enough for a bonus point win against the same opposition.

The match was played on Tullow’s new 4G pitch on a bitterly cold and windy day, with the wind blowing down the pitch to the clubhouse end. The wind meant that it was going to be very difficult to escape from the 22 towards the clubhouse end, as kicks would make very little distance.

Longford chose to play against the wind in the first half in the hope that a mighty defensive effort could limit Tullow to a manageable score line. Tullow got hold of the ball from the kick off and relentlessly pummeled the Longford line with their big pack. Eventually Tullow made the breakthrough from a driving maul to go 5-0 on front. Tullow added a penalty to stretch their lead.

Longford got some field position but try as they might did not get over the Tullow line. The wind made any penalty opportunities extremely difficult. Longford were left to regret this as Tullow crashed over for two tries just before half time to leave the deficit at 22-0.

The second half was virtually all about Longford trying to score and Tullow staying strong in defence and unfortunately, Longford did not quite show enough guile in attack to out fox a committed defence.

Longford were limited in the second half to one try and a penalty from Ryan McHugh to go down to a disappointing 22-08 loss.

Longford have two matches remaining with the home fixture against Mullingar a big one, the maths are fairly simple at this stage, Longford need two wins from their last two games at home to Mullingar and away to Cill Dara if they are to avoid having to compete in the relegation/promotion play off against the team that finish second in Division 2A.

Finally, the Provincial Towns Cup draw was made during the week. Longford were given two tough draws with the 1st XV away to Carlow and the 2nd XV at home to Boyne.

Longford Senior Women’s home game versus Arklow was cancelled by Arklow at short notice with the game awarded to Longford. Next up is an away trip to Greystones on the 20th.

ON THIS DAY: Former Ireland captain Paul O’Connell forced to retire through injury in 2016

Time to Dust off the Boots, Vet’s Rugby is here

A date in your diary for the Vets team is February 25/26, when we hope to welcome the Garda Vets to CPL Park for our inaugural match. The final details should be confirmed this week. In an effort to make sure players can still find their boots and their tubes of deep heat, there will be a (training) session for an hour on the 4G pitch at 7 this Friday.

We invite everyone who has expressed in an interest in playing Vets rugby to join in for a not too strenuous blow out. The only qualification you need is to be over 35 and have played rugby before! We welcome all players who have played for Longford or are from the general area who would like to play some Vets rugby.

We have invites to play other teams and an end of season blitz tournament on the first weekend of April for all those who are interested. If you are interested in getting involved, please email lrfconnects@gmail.com or give Tommy Butler a ring/text on 0863143968 or come along to training.

Thanks to everyone who entered our Fantasy Six Nations League. After week one, Shane Hanley heads the standings, although there is a long way to go. You can still join in for fun. Entry is only €10 per player and has to be paid online in advance.

Longford RFC hosted a brilliant coaching seminar on Wednesday past where coaches from all levels within in the club heard how to improve their coaching skills from Steve Coy, Colm Glynn and Senior Men’s Head Coach Glenn Baskett. Well done to Gerry Carthy on organising this great initiative which was very well received by all those that attended.