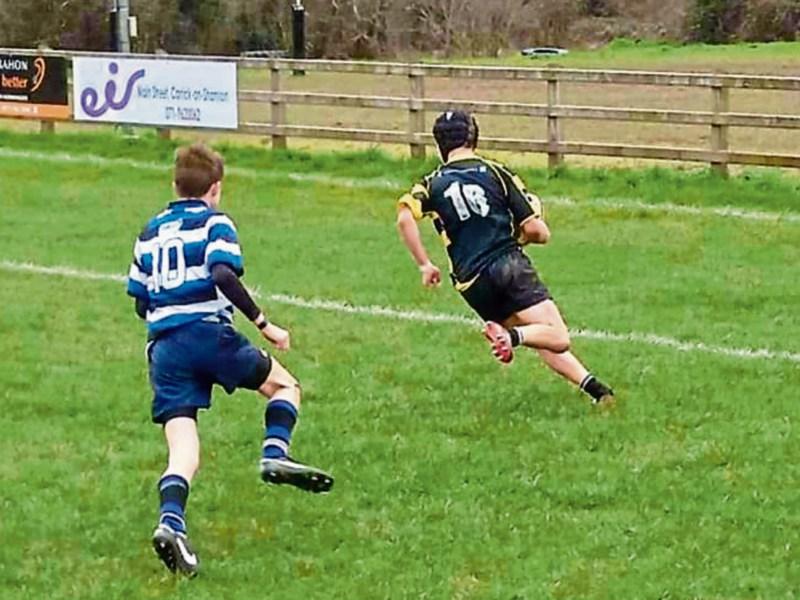 Carrick RFC juvenile teams had mixed luck at the weekend with two wins and one loss in Connacht competition.

Carrick U14s produced a tremendous and hard fought win over Corinthian Blues last Sunday. In a typical cup tie the two teams committed everything in the opening exchanges in both attack and defence. Early Carrick pressure at last paid off with Ronan Connolly making the breakthrough to dot down under the posts giving Jack Moolick a straight forward conversion.

When play resumed in the second half the territorial battle moved in favour of Corinthians who were camped on the Carrick 22 and with six minutes remaining they breached the try line and with the kick converted left the scoreline at 7 all.

On the restart Carrick broke into the Corinthians half and built several phases of play to engineer a penalty 22 metres out and in front of the posts, converted by Moolick, 10-7. The next five minutes saw possession exchanged several times, tackles made again and again, defensive pressure was at a max until on the last second Corinthians knocked on to conclude a massive effort by both teams.

Carrick U15s made the journey to take on Westport RFC last Friday looking to overcome their recent disappointment over their last minute defeat to Sligo. After seeing a try disallowed, Carrick got over their disappointment when Bobby Hanrahan reached a pass from Ben O’Connor and evaded a number of would-be tackles to score the first of his three tries of the day.

Westport hit back with a try to tie the scores at halftime and on 37 minutes, Hanrahan used his strength to power over to give Carrick a three point advantage before Niall Stenson broke from an attack scrum to score near the corner which Ben O'Connor converting.

Hanrahan completed his hat trick shortly after with Carrick finishing off the scoring with Eoghan Rynn touching down in the corner after good interplay between Moran and O’Connor.

Despite putting in arguably their best display of the season, Carrick RFC fell just short after the long journey to take on Corrib RFC in Headford last weekend.

On a very windy day, Corrib had the better of the early exchanges with their huge pack dominant. A dubious penalty for Corrib resulted in a quick series of passes and Corrib crossed the line for a converted try, the difference between the teams at halftime.

Carrick came out raring to go for the second half and after a great ruck in the middle of the pitch, DeSantiago ran 20 metres to touch down under the posts to tie the scores with 15 minutes to go.

Another dazzling run by Kopczynski just came up short of the line, the referee insisting it was short but Carrick's inability to deal effectively with the long range clearance kicks by the Corrib full back eventually cost them dearly towards the end of the match.

A blocked clearance led to Corrib pressure with the referee judging that the ball had been touched down despite heroic Carrick defence. Carrick kept battling and thought they had scored a try when Kopczynski forced his way over the line with three Corrib players tackling him but the touch judge ruled that his foot was in touch and the score disallowed.

Hard luck lads and we'll hopefully see all of this squad back for pre-season in the Autumn.