Carrick came up just short in the Connacht U14 Cup Final when they lost 17-14 to Buccaneers at the Sportsground last Sunday.

Carrick were slow to settle and on 12 minutes Buccaneers scored their first try through Nathan Kelly, converted by Darragh Glennon. On the 17th minute Glennon got over for a second unconverted try leaving the score at 12 nil.

Carrick had their backs against the wall but started to take the game to Buccaneers, keeping them at bay and started making their own forays into the Buccaneers territory. Carrick's Matthew Ffrench was held up on the line and the score remained 12 points to nil at half time.

Carrick started the second half tearing into Buccaneers and on 37 minutes were rewarded with a wonderful running try by Rian Costelloe converted by Jack Moolick leaving the score at 12-7.

Carrick continued to pressure and with 18 minutes remaining and after sustained attacking rucking Jamie Kieran got over for a try, converted by Moolick which left Carrick 14-12 ahead.

From the resultant kick off Carrick conceded a penalty which brought Buccaneers deep into Carrick territory. Carrick defended bravely but could not stop Peter Burke from breaching the line. With the conversion missed the score was now 17-14.

Carrick had 15 minutes to claw back the match but Buccaneers defended sternly leaving them as the Connacht U14 Cup champions.

A huge thank you to the hundreds of supporters who travelled to the Sportsground to roar on these great bunch of lads who served the Club proud and also to the management team of Aenghus Martin, Padraig Gleeson &d Seamus Connolly for all their hard work and dedication. 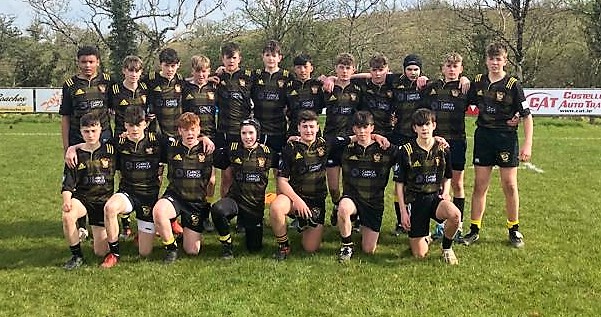 On a glorious Friday afternoon in front of a large local support, Carrick U15s defeated Castlebar RFC to reach the Connacht U15 Plate Final. In a highly entertaining game, Carrick emerged the victors by four tries to three on a final scoreline of 27 points to 17.

Carrick started the game with real intensity with captain Niall Stenson to the fore in the early exchanges. Carrick were clearly intent on moving the ball at pace with wingers David Chen and Cathal Enright having a real influence on proceeding during the early exchanges.

Castlebar also brought a huge intensity to the game and it took a piece of magic from Stenson when he broke from the base of the Carrick scrum on the half way line and evaded three would be tackles to score in the corner. Unfortunately David Chen missed the extras.

As the game entered the latter stages of the first half Carrick’s back line of Peter Moran, Tristan Hoey, David Chen and Cathal Enright were beginning to cut lose and enjoy themselves and after some brilliant interplay Cathal Enright was held up as he attempted to score in the corner.

Carrick were now using their forward ball carriers to good effect with scrum half Luke Creighton dictating proceedings by using Andrew Deegan, Callum O’Rourke and Jayden Bosomtwe to punch holes in the Castlebar rearguard. On 25 minutes after a mazy run, David Chen was stopped on the line with a high tackle and from the resulting penalty Eoghan Rynn scored under the posts with Peter Moran adding the extras.

Unfortunately Carrick conceded a soft try on 29 minutes to leave the score at half time, 12 points to 5 to Carrick.

On the resumption of the second half Carrick were dominating proceedings against a resolute Castlebar side and a penalty on 35 minutes allowed Carrick to extend their lead to 10 points.

With Bobby Hanrahan leading the offensive line, Carrick had their visitors pinned down in their own half for the majority of the opening exchanges and the move of the match saw Stenson send Cathal Enright over for his first try of the day.

With David Chen failing to add the extras Carrick were now leading by 15 points but some poor defending allowed Castlebar to add another try to leave 10 between the sides before Enright carved through the visitors defence to score under the posts with O’Connor adding the extras.

Castlebar had the final act of the game by scoring a consolation try, leaving the Carrick boys contesting the Connacht plate final against Monivea this weekend. Club supporters are reminded to keep up to date on Facebook