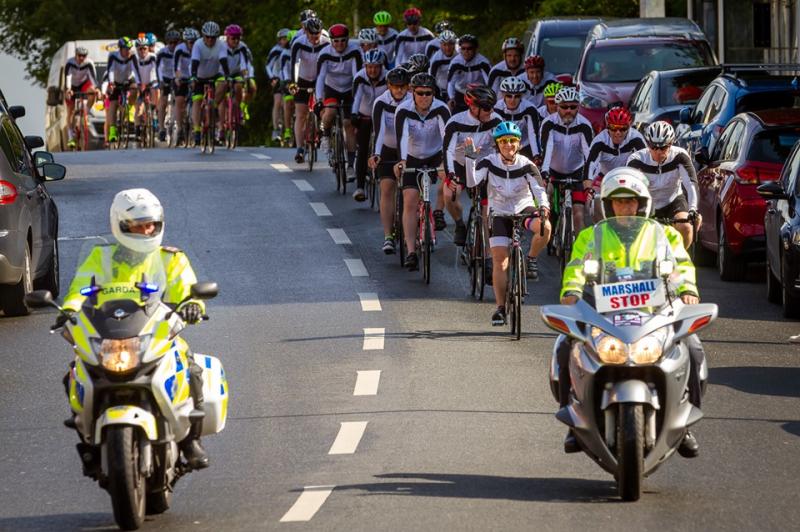 The travelling circus returns home! Cyclists completing the Delma Cavanagh Memorial Cycle arrive back in Dromahair having travelled from Limerick. Since 2014 they have raised €126,200 for SHOUT

What started out in 2013 as one man’s dream to cycle to his native Limerick from his home in Dromahair has grown beyond his wildest dreams and this year John Cavanagh, his partner Sinead McKeon and all involved in the Delma Cavanagh Memorial Cycle presented a cheque for €34,200 to the Sligo Hospital Oncology Unit Transport (SHOUT).

It brings the total raised by the cycle for SHOUT since 2014 to €126,200, funds which have been invaluable for the organisation that is dedicated to improving the provision of cancer care for patients within the local region.

Every cent donated goes directly to SHOUT with that money enabling the organisation purchase vital equipment such as electric beds and a bladder scanner for the oncology ward.

Due to the increase in paediatric cancer there is a room in the paediatric ward specifically for oncology, similar to the one in the Children’s Hospital in Crumlin. In the six-bed oncology ward they have installed individual televisions for each bed and have refurbished the family room.

Read Also: Kilavoggy's Iron Bridge to close from next week 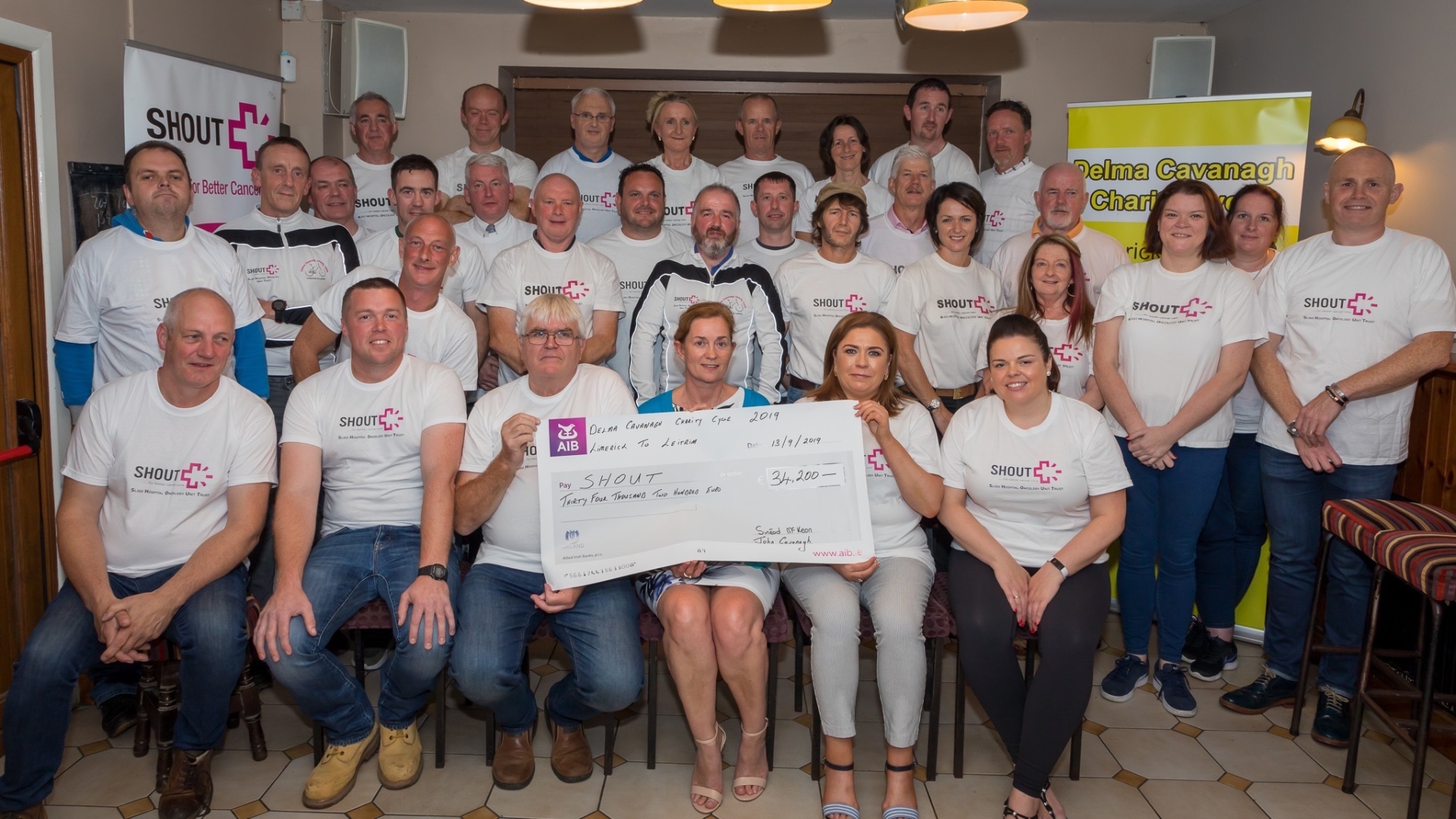 After he successfully completed his adventure in 2013 that saw him and close friends and family members cycle from Dromahair to Limerick, John was inundated with requests from those wishing to join him the following year joking: “I only ever expected to cycle down home!”

There had been no plans to hold a second event but suddenly it became clear the demand was there and the Delma Cavanagh Memorial Cycle was born.

The decision was made to start the cycle in Limerick and end in Dromahair; a decision that proved a popular one as the finale, when the group climbs the hill and then drops into the valley locating Dromahair’s Main Street, is a special one after two days in the saddle with John commenting: “The homecoming is a huge thing. You come over the top of the hill with a lump in your throat.”

Since they first departed Limerick in 2014 to make the two day journey back to Dromahair a total of 75 cyclists have taken part in the event. This year 42 cyclists completed the adventure with an ever increasing number of women taking part in the cycle. This year the group had eight female cyclists.

In order for the cycle to be the success it has become, a huge amount of work is put in by many people. As well as the training put in by the cyclists, a team of organisers, fundraisers and helpers help ensure the event passes by as smoothly as possible.
As the event has grown in size, an effort has been made to hold smaller events that contribute to the overall fundraising efforts.

A table quiz, coffee morning, barbecue night and a turbo pedaling session in Strandhill, in the worst weather imaginable, have all helped raise the total amount with the aim of giving something back to the local community.

Paying tribute to all who have hopped on the saddle or helped out by being part of the support crew John said: “Since we started people in the group have lost loved ones.

When organising an event that sees in excess of 40 cyclists take to the country's busy national roads, safety is the number on priority for all concerned.

John and Sinead have stressed the importance of safety and vigilance on the road. In this regard they have been helped by many to ensure the entire team is looked after, in every regard. 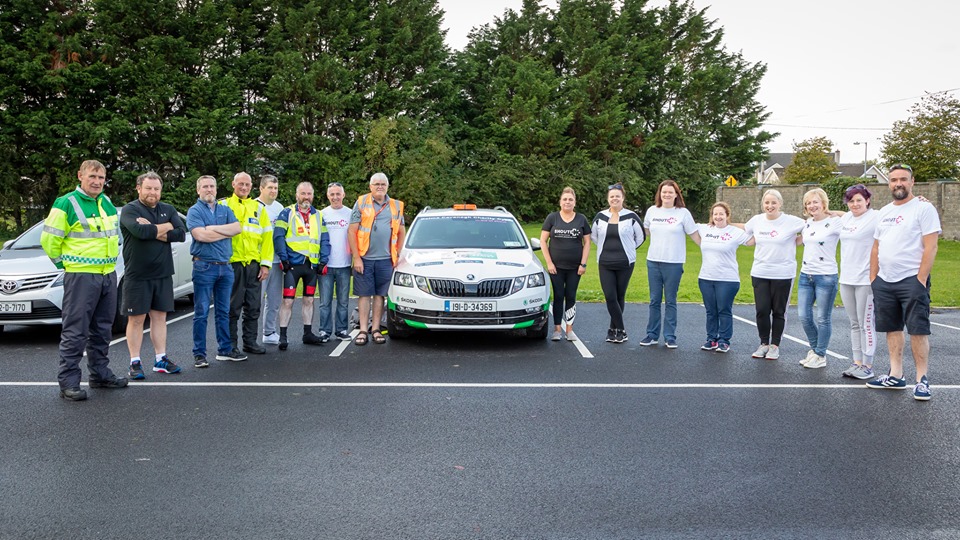 A member of An Garda Siochana's traffic corps has provided invaluable assistance, assisted by other bike marshals meaning junctions are kept safe at all times for the cyclists and other motorists.

As well as the assistance from a safety point of view there are many others who give their time and help to the cause. Couriers transporting the bikes to Limerick; a service vehicle; two sponsored team cars and a food van are just some of the additional roles that are filled to ensure the event runs smoothly as the entire Dromahair community rows in behind the cause.

The cycle has touched a chord with so many and help of all kind pours in from all over the country in all shapes and guises.
Water and food is sponsored, while community centres and GAA clubs have been quick to offer any help they can.

Thanking those who have helped in any and every way John said: “The support crew is needed to do the back-up work for the cyclists. When the cyclists stop the food and everything they need is there waiting for them.

“GAA clubs and community centres have given us their facilities free of charge. Different places all chip in, even if they are not connected to Dromahair. It couldn't work without that.”

While the hard work is carried out on the road over two days in August, the planning and preparation involved in staging such an event means the work goes on for much of the year.

As Sinead explained: “The hotels are already booked for next year. We did that when we stayed there on this year's cycle. It starts before it finishes!”

While there are always some variations to the route the cycle takes, the exact journey will not be revealed just yet but Sinead did have some good news for any cyclists who are still haunted by memories of the Burren.

“We had a great route this year, we had a lot more hard shoulders and we weren't in the Burren! The Burren is lovely, it's incredible but I'd advise you to visit it in your own time.”

Such has been the success of the Delma Cavanagh Memorial Cycle, it is almost at capacity in terms of the number of cyclists taking part but John and Sinead both stressed they will always try to find room for any locals wishing to take part with John adding: “People who do it for the first time are often nervous and worrying but they come back wondering what they were worrying about.

“You do need to put the training in but it is not competitive, there is a social side to it and everyone pushes each other on and we are hoping that 2020 will be another successful year.”