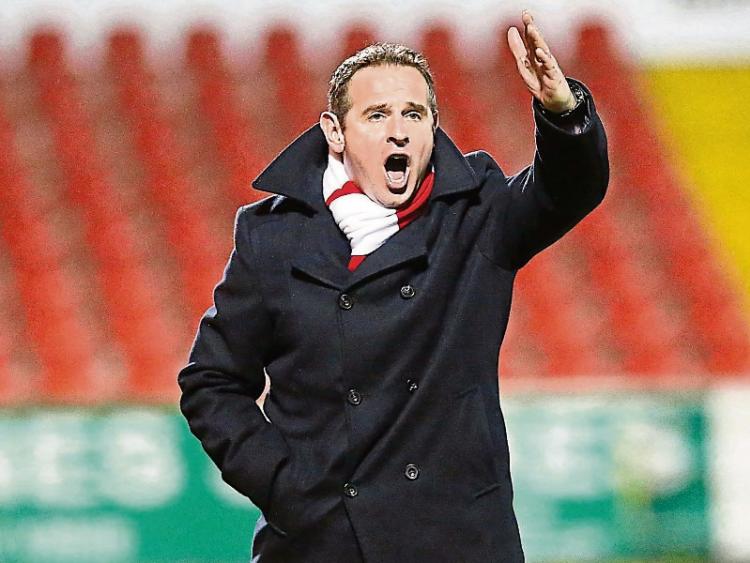 On the day that the SSE Airtricity League Brand Review was presented to the public, to mixed reviews, Sligo Rovers launched a five year strategic plan which outlines the ambitions of the club.

Nine key objectives were outlined focusing on every aspect of the football club from improving the commercial viability of the club; achieving consistent results on the pitch; developing and harnessing a lifetime affiliation with the club for younger fans and having the highest standard of management structures in place.

The presentation was delivered by Martin Heraghty (Chairman), David Roe (Treasurer) and first team manager Dave Robertson. Among the objectives of the five year plan are that the team will regularly qualify for European competition while also competing for domestic honours.

Having completed his first year of management in the League Ireland, Dave could be forgiven for feeling the pressure of those expectations but when speaking to the Leitrim Observer he insisted he and his players are delighted the ambition of the club matches their own aspirations.

“That's the stuff we thrive on. Everyone from myself to the players and staff, everyone has that belief. I'll be honest, I wouldn't have come here if there was no ambition, if there was an aspiration of finishing in mid-table each year, of mediocrity.”

Robertson, a London native who previously managed Peterborough, faced what could have been perceived to have been a daunting task when he arrived at the club a year ago. Although Sligo Rovers were league champions as recently as 2012, a turbulent period saw no fewer than six managers attempt to steady the ship before Robertson's appointment.

Relegation was narrowly avoided in 2015 so the immediate task facing Rovers for the 2016 season was to ensure a similar scenario was avoided.

Reflecting on his first year at The Showgrounds, Dave was typically upbeat.

“I think there has been lots of positives. It's been a good year in terms of what we set out to achieve. We've consolidated and put a real solid foundation in now.

“The reason why I took the job a year ago, the club's got a great history a great infrastructure. I felt it was a project that could be developed and I feel that we're on track with that so on reflection we achieved relative success but what we need to do now is capitalise on the foundation and the stability that we have brought to the football club and take us on to the next level and that's where the focus has been in the off-season.”

Assessing how good or how bad the league is in terms of standards can be a tricky task but while he acknowledged there is room for improvement, Dave was impressed with the talent on display.

“I've really enjoyed the year. There is quite a big difference between the top clubs and the teams lower down and that would be reflected in the clubs who are full-time and the clubs who are part-time. Without being disrespectful to anybody, there is a real difference.

“The standard of the football, there are a lot of very good footballing sides in the league. There are some grounds that are really good grounds to go to, there are some grounds that you just have to grind it out, put in a professional performance and make sure you come away with the three points. The standard of players is very underestimated and there is some real quality in the league.”

One feature of his reign in charge at The Showgrounds has been that rather than waiting until the end of the season to re-sign his playing staff, that was a task that was begun midway though last season and has made preparations for the 2017 more straightforward than was the case 12 months ago.

Speaking about the significance of getting contracts sorted out early for his players Dave noted, “It's helped the stability of the squad. There are a lot of things from the history of the club to learn from in a really positive way.

“What I wanted to do was provide and reward the players that we want to keep at the football club and give them the understanding and be safe in the knowledge that they are valued and they are wanted here and to be fair to them they bought into that and they repaid not only myself but also the supporters and the football club with their performance levels because I think it is important that you invest in people.

“When you have a team that are so close and so cohesive we wanted to maintain the nucleus of that and naturally build on that for next season.”

The signing of new contracts is obviously beneficial to the players and manager but as Dave explained it can also be beneficial to the club. Without naming the Ireland captain, Dave suggested lessons have been learned from the Seamus Coleman transfer to Everton, which was completed without a sell-on clause.

Another feature of last season's performances that will need improving is the disciplinary record. The first game of the season saw two Bit O'Red players see red and it proved to be a theme for much of the year. While acknowledging it is an issue taken seriously at the club, Dave would like the league to introduce a process to appeal red cards.

“That's important, not only for myself but for all of the players. The bottom line is I think our disciplinary record improved massively in the last round of games. We've seen steady progression throughout the year but you are always going to get that controversial element within football but I have to say in general coming through those last round of games I think things were much better in terms of the standard of officiating and the common sense approach that was taken.

“I'd like to be able be appeal the red cards then I think there probably would (be less red cards) but until there are changes to the rules then that won't happen. With there being no process to appeal red cards, that makes it tough so I would hope that is something that would be addressed in the future.

The stand-out team over the past number of years has undoubtedly been Dundalk and their exploits in Europe have further raised their profile but does Dave believe their success will be of significant benefit to the League as a whole?

“I don't know, I think it can have a knock-on effect to the league. More so it will probably influence the FAI to the strength of the league. They are the champions of the country and they have shown what the champions can do on a European footing and that in itself will have a knock-on effect to the FAI and the creditability of the League of Ireland.

“They have certainly sown a seed to raise their own profile but I think there are also spin-offs to the FAI and the league as a result of how well they have done.”

Dave saw up close last year just how good Dundalk can be but he was able to look back on those three games with plenty of encouragement. Although Dundalk won two of those games, Rovers won the other in Oriel Park, while the team that finished second last season, Cork City, failed to beat Rovers in three attempts.

“They were really good games for us. I'll be honest, it was no surprise to me that John Caulfield came in to try to take two of our players (Jimmy Keohane and Achille Campion) because we are the only team that Cork didn't beat last year and that's the top two in the country.

“I now need to continue the recruitment cycle because naturally there is always going to be a small turnover of players at the end of the season. We're looking at four or five players which is a big difference to when I first arrived last year and I had three players on contract and no members of staff.

Looking ahead to the 2017 season Dave is chomping at the bit, eagerly awaiting the return of his players for pre-season training.

“Since the last league game against Wexford, there has been a lot of work going on behind the scenes just to make sure there are improvements when the players return on January 9. The pre-season schedule is all in place. There has been work going on to the pitches, the kit has been ordered, the recruitment is ongoing.

“The players have fulfilled their role in terms of professional standards with the completion of their off-season programmes and their individual plans. Things are looking very positive four weeks away from the start of pre-season and I'm itching to get back and I know the players are too.”

The first target to reach will be surpassing the 2016 points tally, and after that Dave is hoping his players will be able to kick on even further.

“That will be our first goal. We finished the season with 49 points, a +7 goal difference. Our first target is to improve and to improve we need to get to 50 points. If we get to 50 points then we will be competing at the right end of the table that Sligo Rovers needs to be competing at and when we get to that point, that's the point where I'll sit down with the players and we'll re-evaluate and re-assess and we'll go 'final push for the summit fellas, this is where we believe we can end up at the end of the season'.”