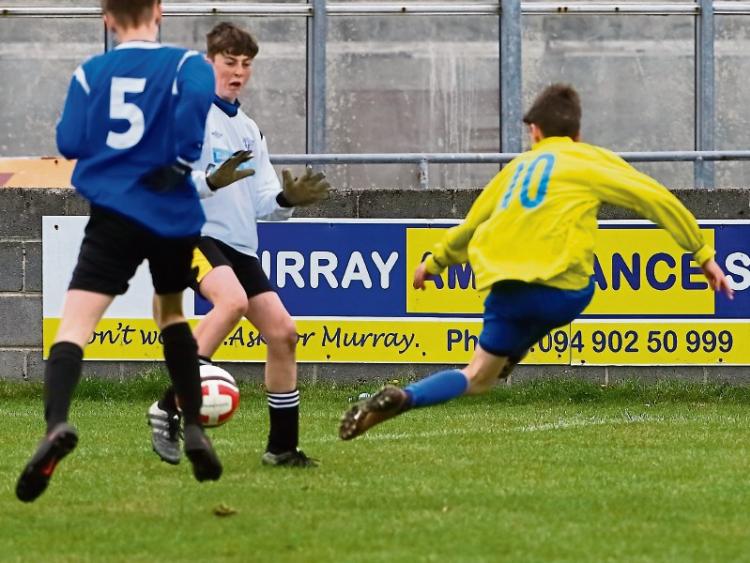 With St Clare's CS Manorhamilton and Seamount College, Kinvara deadlocked in last Thursday's Connacht Schools First Year ‘B’ Boys Connacht Cup Final it appeared as though a penalty shoot-out would be necessary to determine a winner before Patrick Montgomery struck deep in injury time for what proved to be the game's only goal.

It was a dramatic conclusion to what was an absorbing final but there could be no arguing St Clare's were fully deserving of their victory.

The midfield area of the pitch was where St Clare's laid the foundation for their victory. Cathal O'Connell offered plenty of protection for the back four while the wingers Gabriel Gilbride and Alan Kavanagh were as effective tormenting the Seamount defence as they were helping out their own full-backs.

Eanna Clancy was the game's most influential figure as he dominated the centre of midfield. His close control, ability to beat an opponent, pick a pass and be impressive in the air were vital to St Clare's as he was involved in most of their good work throughout the afternoon, at both ends of the pitch.

The game would arguably have been over as a contest before the need for extra-time were it not for a series of wonderful tackles from Seamount's Sean Costello. The imposing centre-back made eight wonderful challenges to prevent a various St Clare's players from getting a shot at goal but ultimately he was powerless to prevent Patrick Montgomery from scoring the winning goal.

The victory was no more than the Manorhamilton school deserved as they took the game to their opponents right from the start.

The game was barely two minutes old when Eanna Clancy and the tireless Diarmuid Giblin combined to threaten the Seamount penalty box for the first time. The threat was cleared for a corner but St Clare's intentions were clear.

While they dominated in terms of possession and territory St Clare's were finding it difficult to get the better of the well marshalled Seamount defence. A seventh minute snapshot from Giblin was saved easily by Seamount goalkeeper Paddy Nolan.

St Clare's thought they would be taking a slender advantage into the half-time interval when Diarmuid Giblin found the Galway school's net in the 25th minute but he was denied by an offside flag.

Having survived that scare Seamount threatened the St Clare's goal for the first time two minutes later but Tom Kidd's shot from the edge of the box shaved the crossbar before going over meaning there was nothing separating the sides at half-time.

The closest either side came to forcing a breakthrough in the second half was when Diarmuid Giblin was given the opportunity to stretch his legs as he raced on to a through ball with eight minutes remaining but as he was about to pull the trigger he was foiled by another wonderful tackle from Sean Costello. That proved to be the last chance of note during the 60 minutes of regulation play meaning the game went to an additional 20 minutes of extra-time.

The first period of extra-time saw Seamount go close to breaking the deadlock but Shane Conlon made an excellent save to deny Oisin Ivers, who struck what seemed to be a perfect half-volley from the edge of the box.

The St Clare's back four of Evan Broughton, Matthew Connolly, Barry McNulty and Dylan McDermott who were assured throughout the game had another anxious moment when Tadhg Heavey attempted to lob Conlan but his speculative effort was just wide.

With just six minutes left in the second period of extra-time a penalty shoot-out seemed inevitable but there was still time for late drama as Patrick Montgomery took full advantage of good link-up play involving Tarach Ó Snodaigh and Eanna Clancy and he applied a cool finish as he slotted the ball low past the Seamount goalkeeper to secure a dramatic but deserved win for St Clare's.

Main Man
Seamount College centre-back Sean Costello could consider himself very unfortunate to be on the losing side as he made numerous wonderful challenges to deny the Manorhamilton school. Cathal O'Connell, Patrick Montgomery and Diarmuid Giblin were all on top form for St Clare's but team captain Eanna Clancy, who showed great awareness and composure throughout gets the vote.

Talking Point
The attacking threat of St Clare's pitted against the resolute defence of Seamount College made for an absorbing encounter. Manor's passing game was countered by Seamount's desire to get the ball forward as quickly as possible which made for a competitive and intriguing encounter.

Turning Point
Seamount will point to an excellent save from St Clare's goalkeeper Shane Conlan who turned over Tom Kidd's shot from the goalbound shot from the edge of the box. For St Clare's the defining moment was undoubtedly Patrick Montgomery's late, late winner.

Ref Watch
There were no contentious decisions for referee Barry Blake to make but he was up with play throughout and communicated with players throughout the final to make sure they were aware of why decisions were made.

Lowlight
On a day in which the weather conditions were perfect and the pitch in Celtic Park, Castlebar was in excellent condition both teams were well organised and it is difficult to think of anything that could be considered a lowlight.