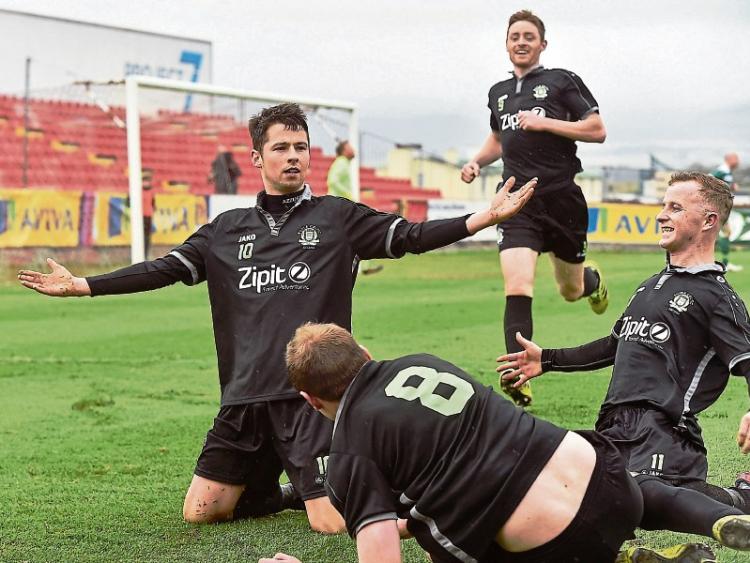 Boyle Celtic's incredible FAI Junior Cup adventure came to a heartbreaking end in The Showgrounds on Sunday last when Evergreen FC advanced to the final but only after a penalty shoot-out.

For much of what was a very competitive encounter, Boyle were the better of the sides but finding the decisive breakthrough was a tough challenge for both sides with a strong breeze and heavy rain showers making conditions difficult.

The opening exchanges saw both sides cancelling each other out with neither side willing to give anything away early in the battle.

The first attack of note saw Danny Browne create some space in midfield before releasing Boyle captain Lochlainn Conboy who in turn picked out Dessie Carlos and the attacking full-back drove at the Evergreen defence. When it appeared he had lost possession inside the Evergreen box he received a touch of good fortune as the ball broke free for Niall Brennan but under pressure from Conor English he was unable to threaten the Kilkenny side's goal.

Barely a minute later Boyle Celtic were on the attack again. The ball broke to Luka Roddy after Gerry McDermottroe's free, floated to the back post was headed back into his path. Unfortunately for Roddy and Boyle his shot went harmlessly over the bar.

With space at a premium Boyle's next chance arrived with 30 minutes on the clock and it came from a familiar source. Dessie Carlos ran at the Evergreen defence and with space opening in front of him, he unleashed a shot goalwards that flew over the bar.

The wait for the breakthrough ended seven minutes later as Boyle went from defending a corner to being on the attack in the space of seconds.

When Boyle cleared the ball, Niall Brennan put pressure on the Evergreen defence, forcing the ball back to keeper Patrick Holden. Dessie Carlos anticipated the backpass and was able to dispossess Holden who then fouled Carlos when trying to win the ball back.

Danny Browne, the most composed man in The Showgrounds all afternoon, took responsibility for the penalty and calmly dispatched his shot past Holden to give Boyle the lead.

That lead was to last until the 68th minute when a period of heavy Evergreen pressure eventually paid dividends. A long throw from Tom Earls caused panic as there are a number of physically imposing Evergreen players who needed to be watched carefully.

However, it was centre-forward Michael Drennan, formerly of Aston Villa and Shamrock Rovers who found space at the back post and when the ball arrived to him he slotted the ball past Suffin.

That goal, combined with the miserable weather, knocked the enthusiasm out of the Boyle supporters who went quite for a period of time. However, they were to find their voice once more when Gerry McDermottroe went agonisingly close to regaining the lead for Boyle.

The full-back's 74th minute free from outside the box and near the endline was curled dangerously into the box but aided by a strong breeze the ball evaded the grasp of the goalkeeper and appeared to be heading towards the top corner of the goal before it struck the crossbar.

With nine minutes to go, McDermottroe had another sight of goal but he was unlucky to see his effort go just wide of the post with the goalkeeper having given up on the shot.

Five minutes into injury time, Evergreen almost snatched victory when substitute Daragh Walshe broke free of the Boyle defence. Fortunately for Boyle, a heavy touch from Walshe allowed Suffin the opportunity to dive on the ball and clear the danger.

Two 10 minute periods of extra-time saw half-chances fall to both sides but none were capitalised upon meaning a penalty shoot-out was necessary to see who would advance to the final.

The shoot-out began perfectly from a Boyle point of view with Kyle Suffin saving Drennan's opening effort but they were unable to capitalise as Danny Browne's penalty crashed off the crossbar.

Tom Earls was up next for Evergreen and opened the scoring, shooting down the middle. Gerry McDermottroe sought to open Boyle's shoot-out account but his effort was brilliantly saved by Holden.

The pendulum then took a huge swing in favour of Evergreen when Daragh Walshe scored past Suffin.

At the third attempt, Boyle scored their first of the shoot-out with Aaron Murren's shot squeezing past Holden.

Despite the best efforts of Kyle Suffin, Conor English scored Evergreen's third penalty and although Niall Brennan scored to keep hope Boyle's hopes alive, Niall Andrews brought the shoot-out to an end when he confidently slotted his penalty past Suffin.

Main Man
In a game in which there was so little to separate the sides there were a number of candidates for the man of the match award. Dean Barcoe and Conor English were immense for Evergreen as was Niall Andrews at centre-back. For Boyle Celtic Dessie Carlos was excellent at full-back. Gerry McDermottroe and Mick Corrigan also shone but it was playmaker Danny Browne who was deservedly awarded the man of the match award as he controlled the tempo of the game for Boyle all afternoon.

Talking Point
Despite the result it has been an incredible adventure for Boyle Celtic. The fact that they took the lead and came close on a number of occasions to retaking the lead after Evergreen equalised won't lessen the pain of the loss but Darren Hurd's team can take a lot of pride from their cup run.

Turning Point
Having got off to the perfect start in the penalty shoot-out when Kyle Suffin saved from Michael Drennan, Boyle missed their first two penalties, swinging the pendulum massively in favour of Evergreen.

Ref Watch
Paul Duddy's decision with 16 minutes remaining not to penalise an apparent handball outside the box by Evergreen goalkeeper Patrick Holden was arguably the most contentious of the afternoon. The referee was alerted to the incident by the linesman but deemed that he had a better view of the alleged offence and no action was taken against the goalkeeper.

Highlight
With nine minutes remaining Gerry McDermottroe's free kick, 20 yards out from goal, flew over the wall but was inches wide of the angle of post and crossbar with the Evergreen goalkeeper rooted to the spot. A great effort that deserved better.

Lowlight
The penalty shoot-out provides so much drama but there is no denying it is unbearably cruel on the losers.