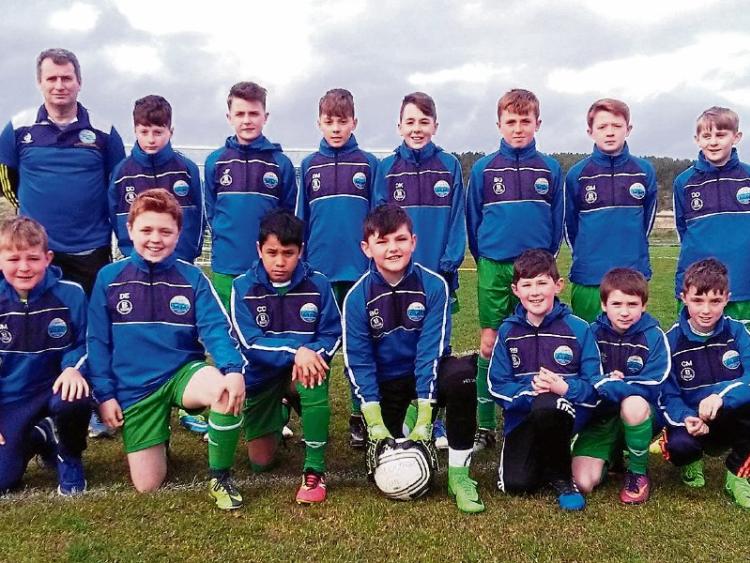 The Carrick Town team who claimed the Sligo/Leitrim U12 Group A Shield title in Strandhill.

Carrick Town turned on the style in the second half to claim victory in the Sligo Leitrim U12 Group A Shield Final in Strandhill.

Up against the home team on Good Friday, Carrick Town faced into the win in the first half and were kept under pressure from most of the half with keeper Brian Cull making some great saves to deny Strand Celtic a first half breakthrough.

With a solid defensive showing holding out the Sligo lads, Carrick made a few changes for the second half and from the off, the Leitrim side put huge pressure on the Strand defence who managed to stand firm.

It took a moment of magic from Man of the Match Gerard Murtagh to turn the game in Carrick Town’s favour as he got the ball in his own defence and took off down the wing, beating three players.

Murtagh wasn’t finished as the Sligo Leitrim U12 player then turned inside, beat another Strand player before cooling finding the net.

Strand replied impressively and even against the wind, they camped in the Carrick half for the next ten minutes with the Leitrim lads breaking dangerously on a few occasions, Jack Foley particularly unlucky as he came close to finding a second.

The second goal did arrive with ten minutes to go and again it was Gerard Murtagh who produced a carbon copy of his first goal to seal the victory.

Carrick held out comfortably under Strand pressure and could have added to their scoreline with Roy Brannigan very close to finding the net at the end of the game, leaving captain Ben Guckian to collect the Cup amidst great Carrick Town celebrations.