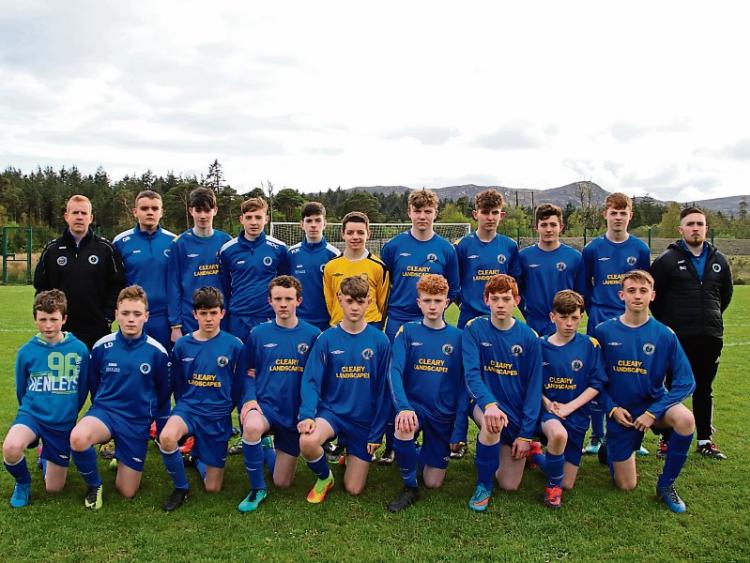 The Manor Rangers players and offcials are pictured prior to last Wednesday's Sligo/Leitrim U-15 League final against Ballisodare United which was played in Ballisodare.

Oran Gethins proved to be the Manor Rangers hero as his hat-trick helped the Leitrim side claim a slender victory over Ballisodare in last Wednesday's U-15 Sligo/Leitrim league final.

Having finished top during the league phase of the competition Ballisodare enjoyed home advantage in the final but Manor Rangers, inspired by Gethins, Peter Maguire and Nathan McMorrow claimed a deserved win in what was a thrilling final.

There was little to separate the sides throughout the hard fought final with Oran Gethins claiming victory for Manor Rangers with his third goal of the game, just two minutes from the end.

Both sides looked to get on the front foot as early as possible with Ballisodare looking dangerous from set pieces, in particular corners during the opening stages. Four minutes into the game a number of deflections and ricochets in the Manor box allowed the ball fall for Jordan McNulty but Manor goalkeeper Iarla Regan was alert to the danger as he smothered the ball.

The game was almost 10 minutes old before a nervous looking Manor showed their ability as an attacking force for the first time. Nathan McMorrow got his head to a delivery from Oran Gethins but he was unable to trouble Ballisodare goalkeeper Tom Meehan.

Moments later the roles were reversed as McMorrow crossed for Gethins but the bounce of the ball deceived the forward and the opportunity came to nothing.

Manor were now visibly growing in confidence and shortly afterwards had another sight of goal. Cathal O'Connell and Peter Maguire linked up well in midfield before Maguire struck a shot towards goal from the edge of the box. Tom Meehan did well to make a save but quickest to react to the loose ball was Oran Gethins. Unfortunately for Manor he was just off target when attempting to divert the rebound to the goal.

Peter Maguire was next to threaten when he got his head to a dangerously floated free but once more Meehan was up to the challenge.

Having been under plenty of pressure Ballisodare went back on the front foot but on this occasion it was Manor Rangers goalkeeper Iarla Regan who needed to be at his best. Having made a fine save to deny Shane Towey he then reacted brilliantly to deny Dylan Wimsey who looked on course to score from the rebound but Regan denied him with a wonderful save.

As the game developed the pace increased with chances falling to both sides but there was an element of luck surrounding the game's opening goal as a Ballisodare corner in the 26th minute deflected off a Manor Rangers defender before going into the goal.

To their credit Manor Rangers reacted very well and were level within two minutes. Oran Gethins raced clear of the Ballisodare defence after being played through by the head of Peter Maguire.

With the Ballisodare goalkeeper advancing to meet him, Gethins headed the ball over Meehan and into the unguarded goal.

Ballisodare were however to regain the lead before the interval in a similar fashion to how they opened the scoring with a corner once more going into the goal off a hapless Manor defender.

The second half continued in much the same vein as the opening 35 minutes with both sides looking dangerous when attacking.

Gethins saw a stunning effort, from just outside the box, go just over the bar while at the other end of the pitch Rhys Willis saw a well struck volley go just wide of the Manor goal.

Numerous opportunities were passed up by both sides before Oran Gethins struck for an equaliser when hope was beginning to vanish for the Manor faithful, 27 minutes into the second half.

Ballisodare almost regained the lead immediately afterwards but Iarla Regan made a wonderful save to deny Shane Towey.

The significance of that save was emphasised with just two minutes remaining when Gethins' pace allowed him to race clear of the Ballisodare defence before he calmly slotted the ball low, into the corner of the net to complete his hat-trick and ensure victory for Manor Rangers.

Main Man
A hat-trick in a league final is a sure way to guarantee the man of the match award. Oran Gethins' three goal contribution was ultimately decisive but his overall effort was equally as impressive as he tormented the Ballisodare defence throughout the game. His pace and strength ensured the Ballisodare defenders had a long and busy evening.

Talking Point
After the sounding of the final whistle the talk in Ballisodare revolved around a high quality game, between two well organised teams that could have gone either way. While Manor will be delighted with their victory they will also know their vulnerability from set pieces could have cost them the game.

Turning Point
While not ultimately what decided the game the injury picked up Ballisodare's Max Stafford was a big blow for the Sligo side to overcome. They were leading 2-1 midway through the second half when their imposing centre-back and captain was forced off with an injury.

Ref Watch
An open and attacking final proved to be relatively easy for referee Owen McLoughlin with no controversy surrounding any of the decisions made.

Highlight
The decisive match winning moment arrived just two minutes from the end of the game but from a Manor Rangers point of view it was well worth the wait. Matthew Connolly's kick-out was flicked on by Peter Maguire aallowing Oran Gethins to display his lightning speed and run on to the ball before applying a low finish to the corner of the net to give Manor Rangers the lead for the first time in the game.

Lowlight
After such a hard fought and closely contested final it was difficult for either side to be on the losing side. Extra-time would have warmly welcomed by the supporters but would have been tough on the players who gave everything during the contest.