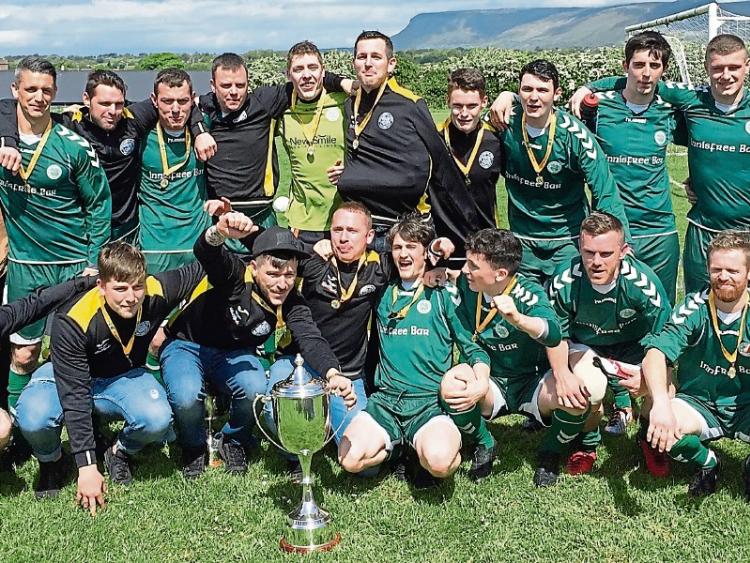 Ballygawley Celtic are the Champions of the Andrew Mullen Sligo Pallets Premier League after an epic encounter on Forthill with MCR.

Ballygawley Celtic needed at least a draw to clinch the title and recent games against MCR have been nip and tuck.

MCR took the lead through sharp shooter Ciaran Harvey and were looking good but Ballygawley Celtic kept pressing and were rewarded with a cracker from Peter Murray that in the end proved to be a gem of a strike as the game ended all square and Ballygawley Celtic commenced their celebrations.

Arrow Harps were on fire at Riverstown, hitting Merville United for four Andy Flynn scoring twice with Darragh Hailstones and Colin Harte each scoring once. Merville United’s only goal was scored by the ever-alert Conor Cox.

This result sets up a great battle between MCR and Arrow Harps that will decide the runners up spot what a game that will be.

In the North-West Hospice Cup Semi Final, a goal from Roland Anderson after ten minutes gave Ballisodare United a massive victory away to neighbours Aughanagh Celtic.

This booked The Boys from Ballisodare United into the Final on Saturday June 10, where their opponents will be the winners of the Manor Rangers versus Carbury game what a final that promises to be.

In the North-West Hospice Cup Semi Final, a young Dromore Villa went down by the odd goal in three against Real Tubber. Matthew Mulhern was the hero for a delighted Real Tubber scoring twice.

Real Tubber will walk out in the final on Saturday May 27, at the Ray Mac Sharry Park against either Cliffoney Celtic or Sligo town side MCR whcih promises to be yet another fabulous final to look forward to.

Boyle Celtic's quest to retain their Super League crown came to an end on Sunday morning last when they faced a top of the table clash in Celtic Park, Boyle against title rivals Carbury.

The game started at a frantic pace with Boyle Celtic on the attack as Carbury defended in numbers and on the stoke of half-time Boyle Celtic took the lead with a beautiful touch from Niall Brennan.

One wondered would Carbury rally or fold in the second half but they changed their formation and came out on the attack and were rewarded with the equaliser from the impeccable Ibrahim Savage.

Carbury went in search of a second and were rewarded when leading scorer Dylan Edwards fired home a glorious second goal. Boyle Celtic showed their steel and continued in hot pursuit of a goal.

Once again it was Mick Corrigan who slammed home the equaliser and the remaining minutes were super charged. However, in the end it was more heartbreak for Boyle Celtic and jubilation for Carbury as they were crowned Great Southern Hotel Sligo Champions for 2016/2017.

Boyle Celtic will finish as runners-up,and will play a major role in deciding who will stay in the Super League next season. Boyle play Aughanagh Celtic next Sunday a win or draw will relegate Aughanagh Celtic along with Yeats United and Glenview Stars, should Aughanagh Celtic win then St John’s will be relegated.