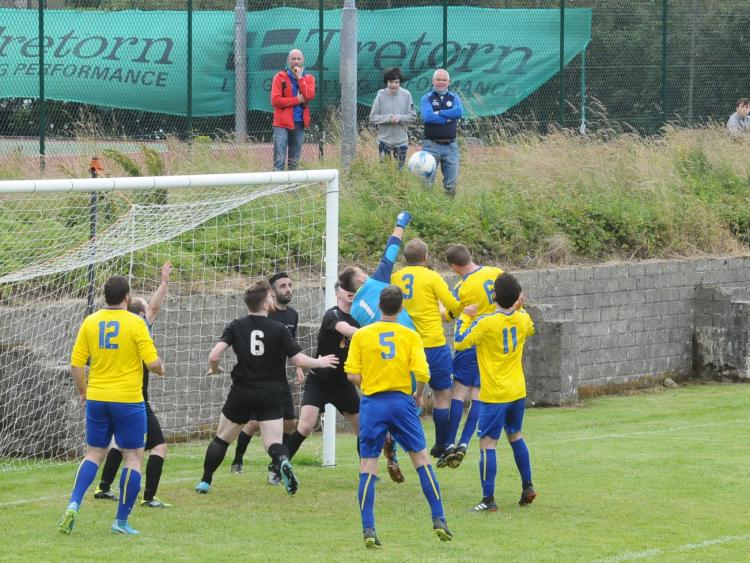 Manorhamilton Rangers have vowed to keep fighting for Sligo Southern Hotel Super League glory despite suffering a set-back with a frustrating draw against second place Carbury in Bee Park on Sunday morning.

The highly anticipated top of the table clash saw Manor Rangers anxious to open a four point lead and wipe out Carbury's game in hand advantage. But despite taking the lead with an early headed goal from Aaron Hickey, a fortunate long range effort from Carbury's Aaron Murrin that eluded superb keeper Paul Scanlon ensured the spoils were shared.

Both goals came in the first 10 minutes but there was plenty of action with penalty calls, the ball hitting the crossbar and bar and last gasp saves from both keepers as a highly entertaining 90 plus minutes ended in what was, probably, a fair enough result on the balance of play.

Manor Rangers can feel they could have sneaked victory with a couple of late chances flashing wide or being blocked but overall, Carbury came to do a job and by the way they celebrated at the final whistle, they knew this one point could be the biggest of the season.

It wasn't the result the Leitrim standard bearers wanted or needed but there was enough in their performance to suggest a good Cup run is ahead and League glory wouldn't be that far away if Carbury, still involved in Connacht Cup action, slip up in their remaining contests.

Manor Rangers stared with an energetic press that didn't allow Carbury to settle and the early action was in and around the visitors goalmouth. Alan Hickey flashed a header wide while Manor fans and players roared for a penalty when Paddy Woulfe's shot was blocked by a defender.

They didn't have long to wait for a goal, however, when Brian McDonald's long throw was flicked on by Alan Hickey and his brother Aaron came flying through the air to head to the net. Unfortunately, a heavy collision with the keeper and the ground saw Hickey require treatment for a heavy blow.

The goal seemed to startle Carbury who saw Gary Armstrong go close after a defence splitting move but ten minutes in, they did level albeit with a bit of luck. Aaron Murrin's deep cross from almost 40 yards out and right on the sideline definitely seemed like a deep cross but it never curled and a stranded Paul Scanlon was left helpless as the ball dipped right under his crossbar and into the top right hand corner. 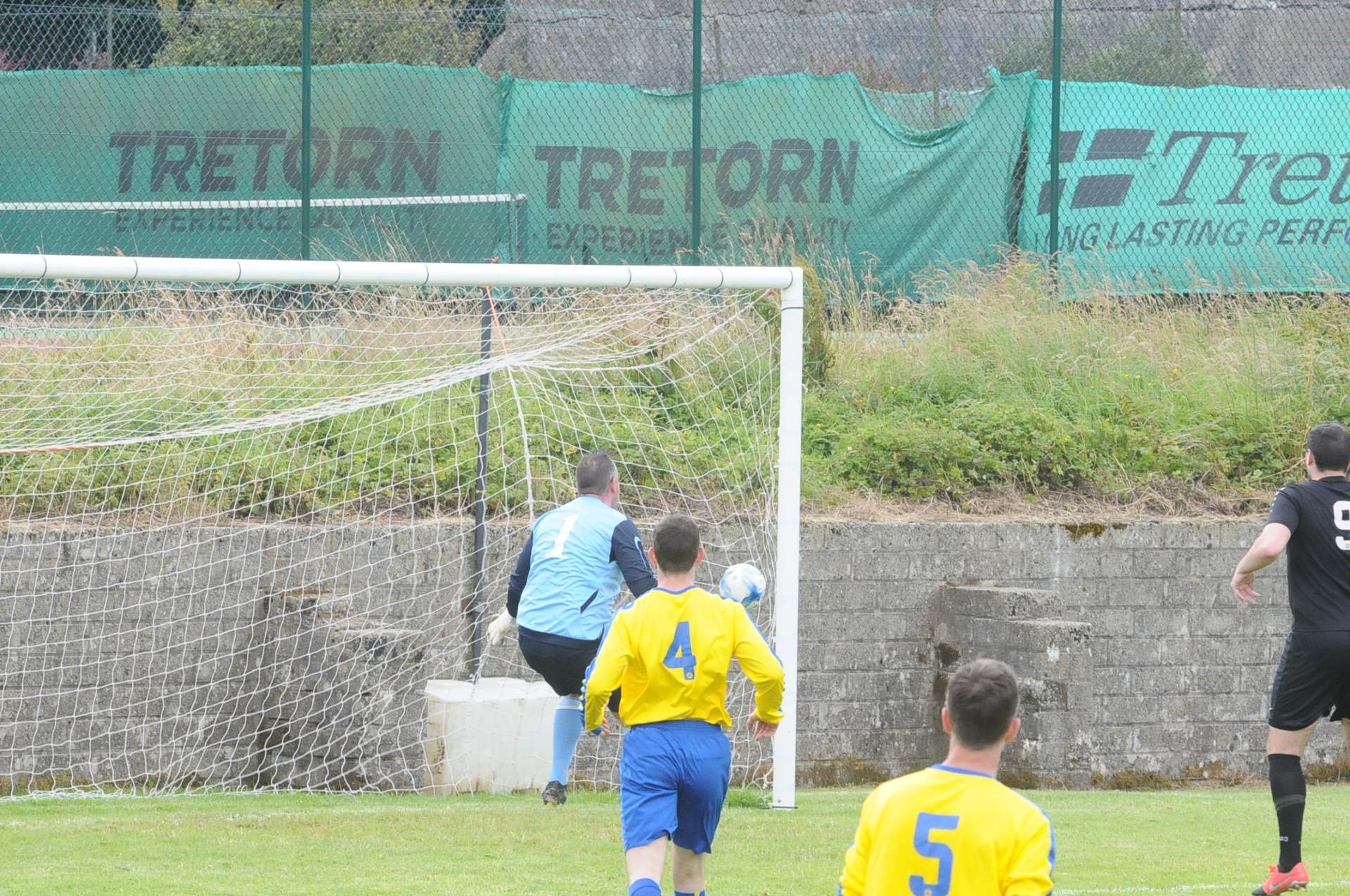 Paul Scanlon can only look on helplessly as Aaron Murrin's cross ends up in the net Picture: Willie Donnellan

The teams continued to trade half chances but Manor will look back on the 24th minutes with a bit of regret. A high ball into the Carbury area bounced up and under pressure from Robbie Cunningham, centre-back Ben Treanor appeared to make contact with the ball with his arm, although it is debatable if it was arm to ball or ball to arm.

The ball was half-clear to Brian McDonald who snapped off a great shot only to see it smashed off the right hand post. Paul Logan saw a shot saved while Alan Hickey saw a shot cleared off the line brilliantly by Gary Armstrong on 31 minutes. The Sligo men broke and it took a double block from Paul Clancy and Ciaran McLoughlin to deny Carbury.

Carbury also saw a shot cleared off the line after Ryan McManus's shot was saved as both sides went in level at the break, 1-1.

Carbury opened the best in the second half and it took a wonderful full length diving save from Paul Scanlon to prevent Ryan McManus from finding the net with a low shot, the chance set up by Gary Armstrong. Winger Gary Finan headed wide as Manor Rangers did well to weather the storm.

An enforced change to Manor's line up saw Aaron Hickey depart the game with Seamus Ryder coming on. The move had benefits for the north Leitrim men who moved Anthony McDonald back to the right back slot and his pace and powerful runs kick started Manor's revival.

Manor did appeal for a penalty when Robbie Cunningham went down but they were waved away by referee Paul Kilcoyne. Anthony McDonald took off a powerful run from his own half on 19 minutes before slipping the ball out to an unmarked Seamus Ryder. Unfortunately for the Manor sub, Carbury keeper Mark Rooney made a solid save to prevent the goal.

Ryan McManus missed a glorious opportunity for a second Carbury goal when the ball was headed back into his path but his chip went well over the bar.

The last ten minutes really saw Manor go for it with Alan Hickey seeing his header cleared off the line by a defender while deep into injury time, Seamus Ryder saw his chance flash across the face of the goal.

Unfortunately, it wasn't to be for Manor Rangers but they are still top of the table with everything to play for. 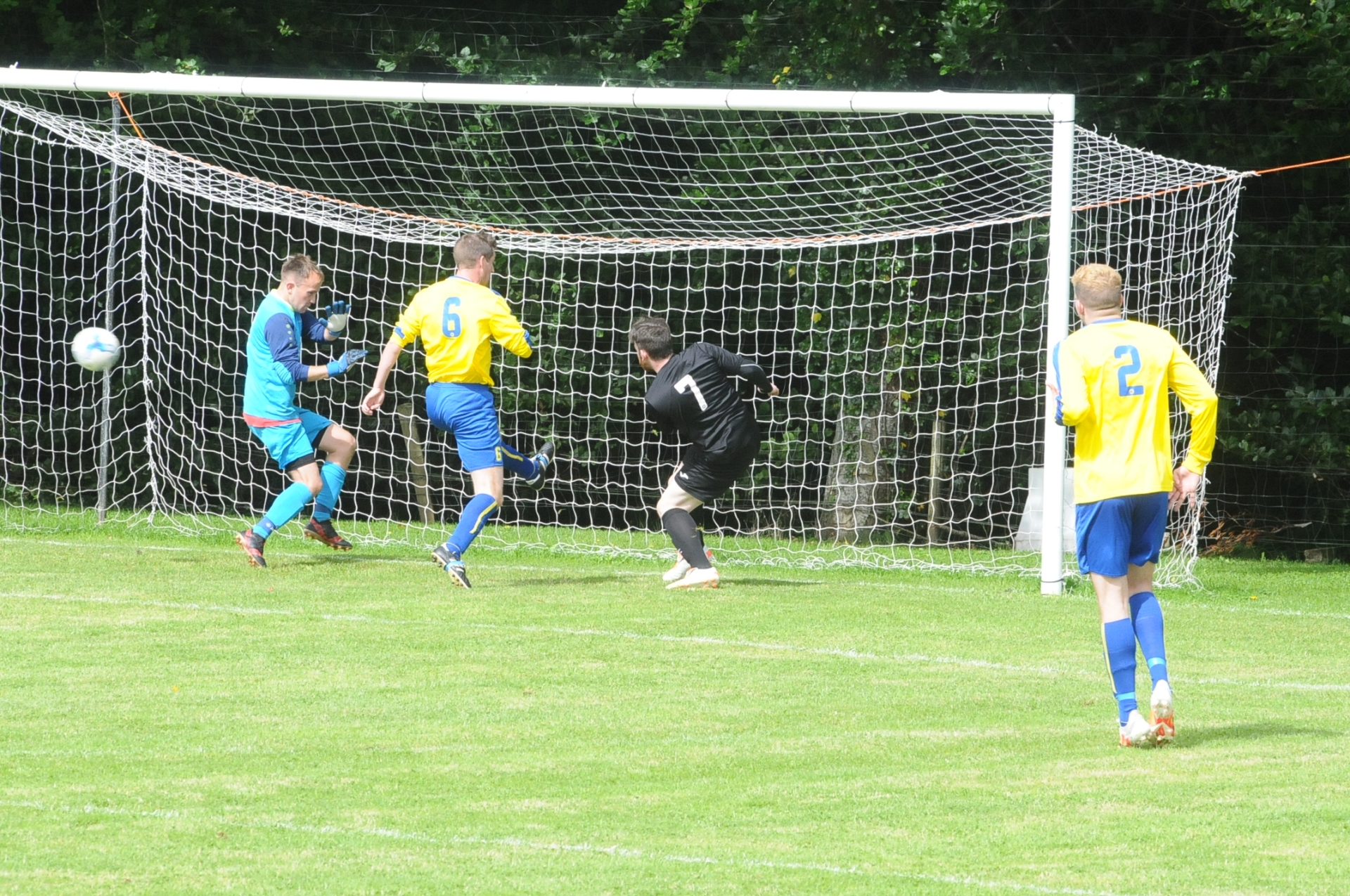 Carbury's Gary Armstrong clears the ball off his own goal-line in Bee Park Picture: Willie Donnellan