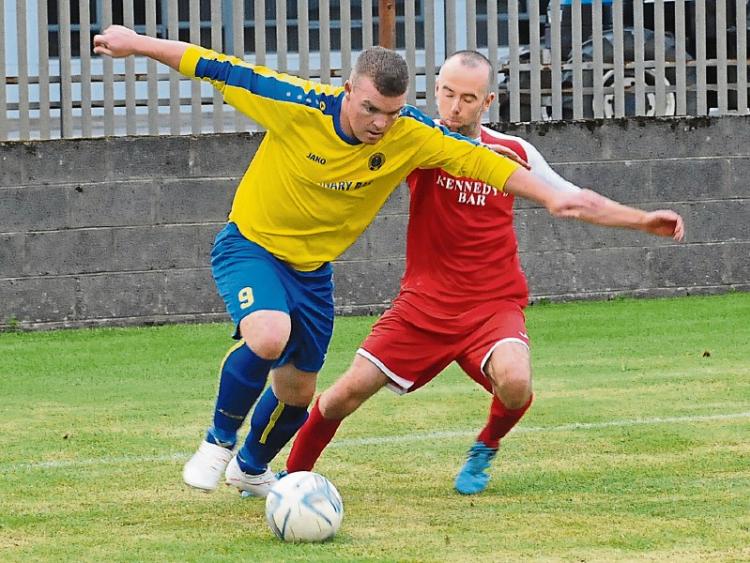 Finishing a fantastic season on an incredible high, Manorhamilton Rangers turned in a five-star, five goal display to see off the challenge of Cartron United and claim the Glasshouse Hotel Cup last Saturday evening in a practically deserted Ray Mac Sharry Park in Sligo.

In a match that was played in a surreal atmosphere of a handful of fans perched on the steps of a Council building across the row to get a view of the action, the victors were both easy winners and under pressure in the same game.

The 5-1 scoreline was an accurate reflection of Manor's killer instinct in front of goal with Robbie Cunningham & Seamus Ryder running Cartron ragged for the opening 45 minutes.

But even the most die hard supporters of the Leitrim team will admit the scoreline was a harsh reflection on a Cartron team who dominated possession in the second half, had two shots cleared off the line and were denied what looked like a clear cut penalty only for the north Leitrim men to hit them twice on the break in the final ten minutes.

Perhaps we shouldn't have been surprised as the teams were level in the League on points and goals scored but when it came to the big moments in this final, it was Manor Rangers composure at both ends of the field that decided the issue.

Robbie Cunningham scored two real striker's goals - the first after a ball through, run and neat finish, the second a real poacher's finish from about two yards out after a corner was headed on.

Yet for all Cunningham's heroics in leading a potent front line where Seamus Ryder and Paul Logan were a real threat, the winners still had goalkeeper Paul Scanlon to thank for a large role in this victory, a couple of superb saves denying the Sligo men some certain goals.

It was that sort of game but there was no doubt that Manorhamilton were the better side, the most organised and the team with a clearer idea of what they wanted to achieve as you got the feeling that no matter what Cartron threw at them, Thomas McDonald's side had the answers.

Manor started the better in the first half with Cartron restricted to half chances, if that at all. Paddy Woulfe had a shot blocked while Cartron keeper Ronan Callaghan made a good save to beat out Seamus Ryder's half volley.

Manor were forcing the pace, keeping Cartron locked firmly in defence but there was no luck from a succession of half chances and when Anthony McDonald felt his hamstring go just 15 minutes into the game, things looked bad for the Leitrim men.

But the tone changed instantly a minute later as Robbie Cunningham burst on to a low ball down the right channel. The Dromahair man rode a hefty challenge from Billy Brennan and shot low and hard to the net for the crucial opening goal.

The goal seemed to wake up Cartron and either side of an Alan Hickey header, the Sligo men had real chances with Paul Scanlon making a fantastic one handed diving save to get down low to stop sub Enda McGowan from scoring on 25 minutes.

You couldn't but be impressed by how Manor Rangers responded. After forcing a throw, Alan Hickey got a nice touch to knock on Brian McDonald's deadly long throw and then, seemingly in slow motion, Cunningham arrived on the spot, hooked his leg up high and managed to get the ball past a stunned Cartron defence for a killer goal.

Cartron continued to see half-chances come an d go against a resolute Manor Rangers defence while Robbie Cunningham got a yellow card for a late challenge that left him on a knife's edge for the remainder of the game.

But the card didn't matter when Aaron Hickey's long free was headed on by Seamus Ryder to a charging Paul Logan. Some great footwork saw him draw the defender before cutting back on to his right foot to apply a killer finish from close range.

That left it 3-0 and it was hard to see a way back for Cartron but they did get it on the stroke of halftime. Brian McDonald almost scored direct from a corner but a long free into the box broke for sub Billy Brennan who got to the ball ahead of Paddy Woulfe, the resulting collision enough for referee Paul Kilcoyne to award a penalty.

Enda McGowan blasted the spot kick home to leave it 3-1 at the halftime interval but Cartron were a different side in the second half, their pace and energy pinning Manor back for long periods. In fact, it only took two minutes for Cartron sub Mick Harte to force Aaron Hickey to clear the ball off the line while Scanlon clawed a dangerous long range out of the net.

Manor broke from that chance and Cunningham look set to grab his hat-trick only for a last gasp tackle to deny him, Manor claiming a penalty.

Paul Logan blasted wide, Brian McDonald's throw was headed over while a Ryder header was saved well. But the pressure was very much on the Manorhamilton defence and it was only breakaways that were troubling Cartron.

Crucially, time was ticking away and Manor really should have added to their lead with a Ryder shot cannoning off the keeper while Paddy Woulfe got on the end of a great move but saw his shot crash off the inside of the post and rebound clear.

Cartron had one effort just deflected out but Brian McDonald made sure of victory with less than seven minutes of normal time left. The midfielder seemed to have to have butchered a breakaway goal chance after he dispossessed a defender, ran through but saw his shot saved by the keeper.

But McDonald kept his head, managed to get round two defenders to fire a bullet of a shot to the top left hand corner. That killed off Carton's fading hopes and the icing was put on the cake when McDonald broke in injury time and set up Paddy Woulfe for a tap in goal to seal a fantastic display.