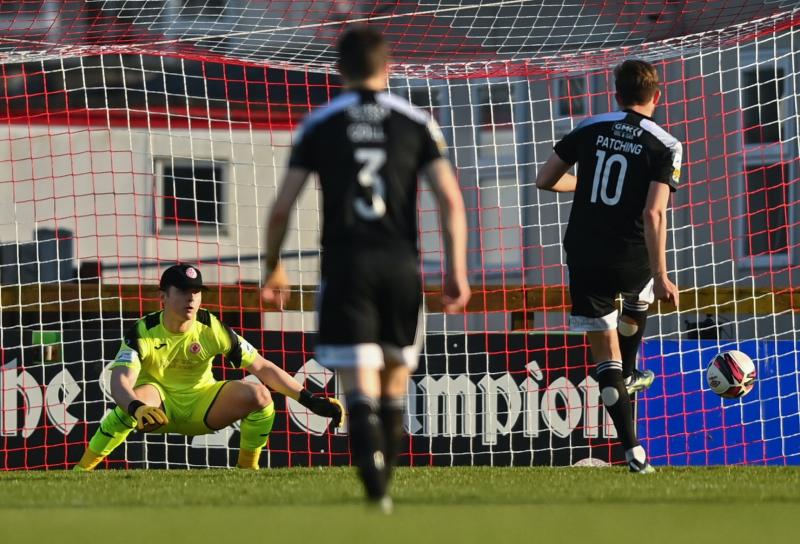 Will Patching sends his second half penalty past Ed McGinty. Pic by Eoin Noonan/ Sportsfile

Sligo Rovers' unbeaten record in the SSE Airtricity Premier Division ended on Saturday night in The Showgrounds as basement club Derry City scored their first win of the campaign.

With newly appointed manager Ruaidhri Higgins in his first game in charge of the Candystripes, a Will Patching penalty proved the difference between the teams as the Bit O'Red lost ground with Shamrock Rovers and St Patrick's Athletic at the top of the table.

Patching's penalty, early in the second half, gave Derry their first win of the season who remained bottom of the Premier Division after Waterford beat Longford 1-0 and Dundalk won the Louth derby against Drogheda Utd 2-1.

Sligo were left frustrated during the first half by a composed and discplined Derry City who controlled possession but the game exploded into life within five minutes of the restart in the second half when Derry were awarded a spot-kick.

Cameron McJannett spread a 60-yard pass across the pitch to Will Fitzgerald on the right, and his direct running won his team a free kick on the right of the Sligo penalty area. Patching’s delivery caused something of a scramble before David Parkhouse was wiped out from the side, and referee John McLoughlin immediately pointed to the penalty spot.

Patching stepped up to take the spot-kick and he casually sent the ball past Ed McGinty into the corner to fire Derry City the lead in a game for the first time this season.

Sligo could not break down Derry despite their efforts, and they only managed their first shot on target on 89 minutes when John Mahon’s weak effort was easily saved by Nathan Gartside.