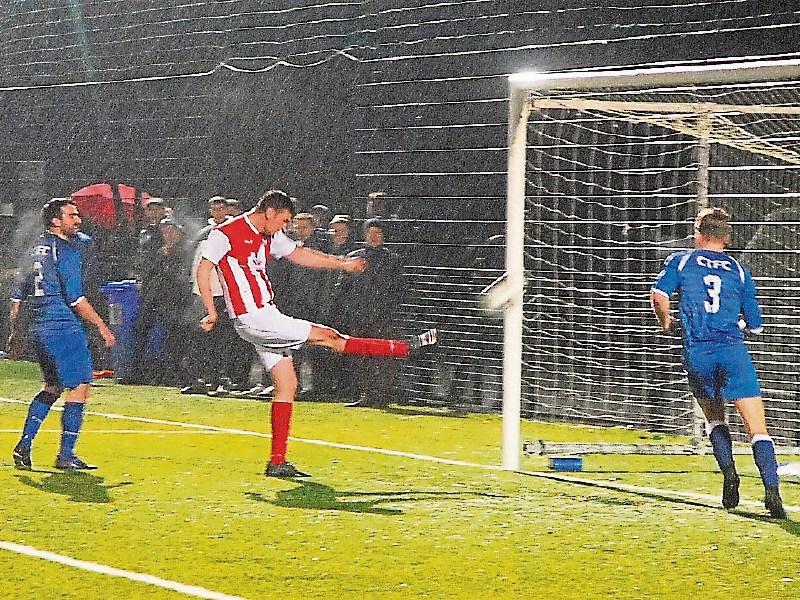 After a Carrick win in the previous encounter, the north Leitrim men managed to open a four points lead on in the table. It meant Carrick needed a win but they never looked back after they got the perfect start when the lively Shane Beirne fired home a third minute penalty.

The well drilled Carrick Town dominated much of the contest but struggled at times to convert that into scores and their second goal owed a bit to fortune when Ray Mulvey’s cross was diverted into his own net by Dromahair’s Jamie Conlon.

Dromahair, all heart and spirit, struggled to match the greater cohesiveness and athleticism of the visitors but it is also fair to say that the 3-1 scoreline is a trifle misleading as Dromahair had the chances to at least force a draw in this hugely entertaining encounter.

And then, after Shane Fowley had disrupted McKiernan coming for a ball midway through the second half to fire home, they had a glorious chance of drawing level only for Donnacha Devaney to see his shot canon back off the post before the Dromahair player put the ball over the bar.

It was a missed chance for which Dromahair paid a hefty price with Beirne netting his second of the game nine minutes from time, superbly finishing a pull-back from Cian Beirne to the Dromahair net to seal all three points.

Dromahair will probably look back on this game with a lot of regret with Carrick's penalty coming from a fluffed clearance and then an own-goal adding to their woes before their missed penalty and wasted chances late on.

Yet, you'd have to say that Carrick Town had an edge throughout the contest. A strong back four, where Roscommon U20 footballer Evan Corcoran stood out, frustrated Dromahair's attack while the ever willing Jack Barnes was a strong ball winning presence in the middle of the park.

Upfront, Carrick Town had lots of options from the pace and trickery of David Regan on the wing to the power of Ray Mulvey and clinical finishing of Shane Beirne. 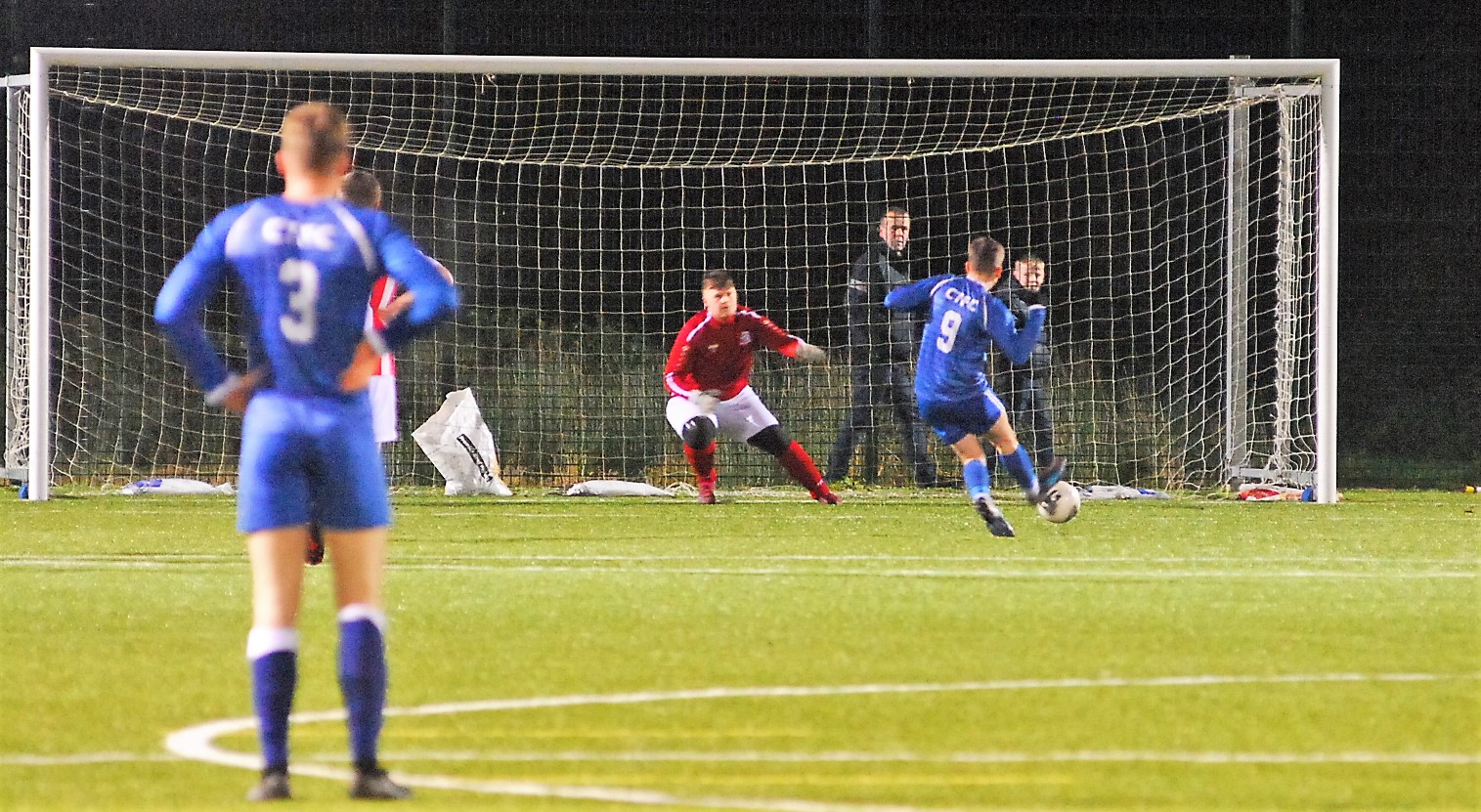 For Dromahair, they relied on the accurate deliveries of Anthony Henneberry for attacking impetus but you couldn't fault the efforts of Leon Harte, Mark Kavanagh and Jamie Conlon

There was a brisk start to the contest with Dromahair's Kevin McDermott doing well to intercept ahead of Shane Beirne while Diarmuid McKiernan had to come off his line quickly to get to the ball ahead of Shane Fowley.

The breakthrough came just three minutes in, David Regan's low cross seemingly cut out but with Shane Beirne getting in ahead of the defender, a collision led to a stone wall penalty, converted with aplomb by Beirne.

Carrick were having the better of the early exchanges with Beirne causing a lot of problems while Brendan Gunning & Jack Barnes were oft target. The visitors thought they had a second when Gunning blocked a clearance from Dromahair keeper Chris Jenkins only for referee Griffin to harshly call a handball on 36 minutes.

However, a minute later, Carrick were celebrating when David Regan's strong run down the left was ended by a foul. Ray Mulvey's low free was fired in powerfully with Jamie Conlon diverting the ball past his own keeper.

Carrick had a shout for a second penalty but when the spot kick came, it arrived at the other end of the field when Ryan Higgins' backheel was intercepted with Alan Kavanagh taken down. Kavanagh drove the penalty goalwards only for Diarmuid McKiernan to somehow get his hand on the ball, diverting it up and over the bar.

Dromahair had another chance but a headed effort was cleared off the line as Carrick Town led 2-0 at the break. McKiernan made a comfortable save from a long range Shane Fowley effort but he had a clean air swipe after a Conlon free hit the Carrick wall.

Carrick's pace was evident in a lightning quick counter attack that ended with Mulvey setting up Regan for a shot that was well saved by Jenkins. Jamie Conlon went close with a snap shot while Jenkins denied Mulvey a goal after good work from sub Cian Beirne.

Carrick looked in control but that was shattered when a short Dromahair corner saw the ball played at mid-level height. McKiernan came to claim but was challenged by Shane Fowley, the ball broke loose and Fowley hammered home to an empty net despite Carrick protests. 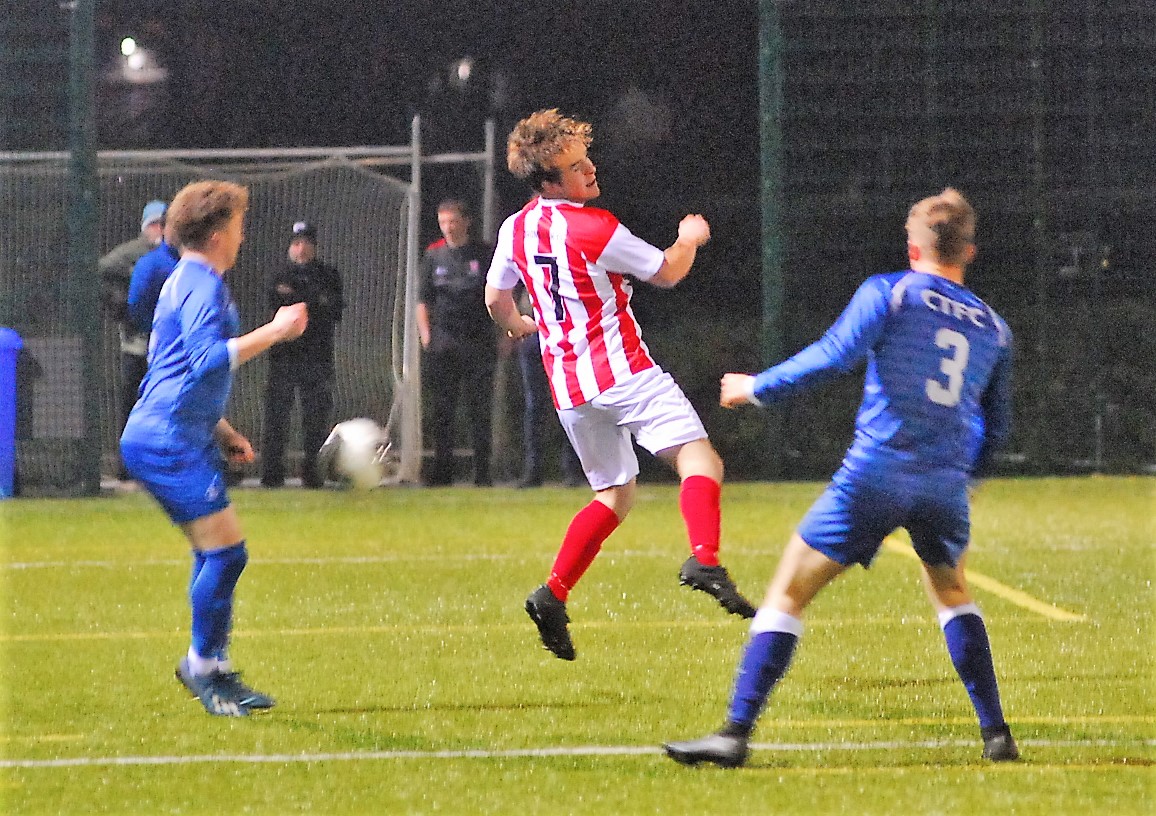 Dromahair's Donnacha Devaney gets his head to the ball ahead of Carrick Town's David Regan & Evan Corcoran Picture: Willie Donnellan

Jenkins did very well to get down low to deny Regan a goal but Dromahair were left cursing their luck when Donnacha Devaney's shot cannoned off the post. The ball fell to Devaney with only an out of position McKiernan to beat but unfortunately for Dromahair, he lifted his shot high over the bar.

Carrick Town took note of the warning and when Cian Beirne did well down the right wing, he pulled the ball back to Shane Beirne who, just inside the area, stroked the ball to the net to seal victory for the visitors.