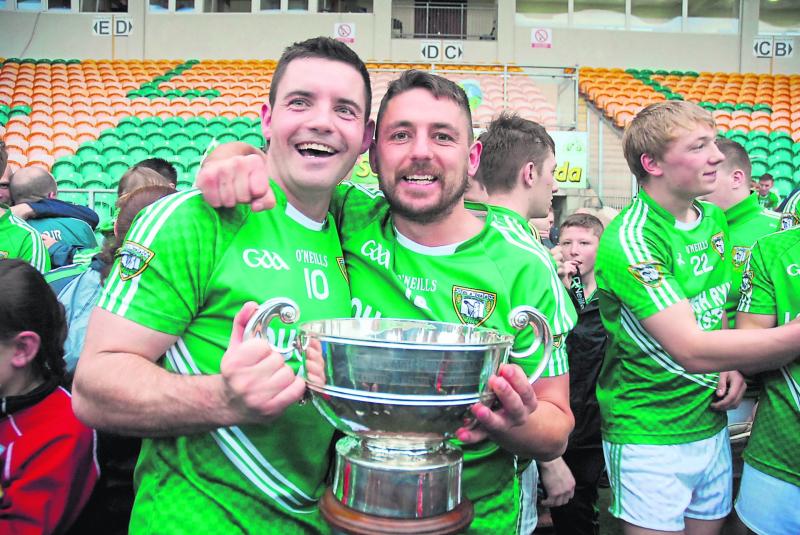 Mohill's Danny Beck and Barry Lupton with the Fenagh Cup last October - who will be lifting the Cup this year?

The build up to Leitrim's 'Super Sunday' continues as we look forward to the Minor, Intermediate and Senior Finals that will be held this coming Sunday in Pairc Sean MacDiaramada.

This week's paper features previews of the weekend's big matches along with interviews from the team managers and captains.

Back page of this week's Observer - the countdown is on to Leitrim's Super Sunday. Read the thoughts from camps ahead of senior&inter finals pic.twitter.com/tsVagSgtbo

As well as the interviews in the paper, we also have extra online comments from the respective camps including the injury blows that have hit Ballinamore, Aughawillan manager Tommy McCormack looking forward to his second County Final 10 years after leading Mohill to glory and Glencar/Manorhamilton manager Aidan Rooney and joint captain James Glancy offer their views on the talent that is available to new Leitrim manager Benny Guckian.

We also have galleries from the Ballinamore and Drumkeerin camps and will be publishing pictures from the Aughawillan and Glencar/Manorhamilton camps ahead of the weekend.

Sun was out for @glencarmanorgaa players as they prepare for @leitrimgaa county final. Interviews in preview in Wednesdays @LeitrimToday pic.twitter.com/ifeNkvQVKc