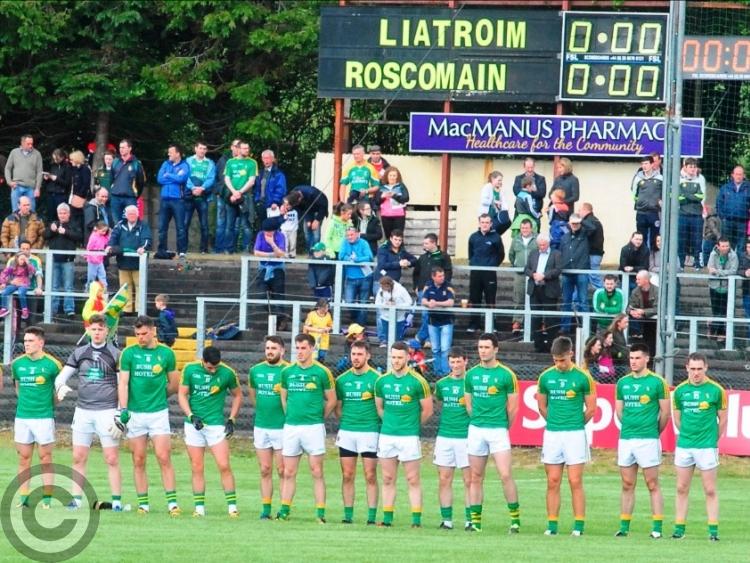 The Leitrim team who faced Roscommon in Pairc Sean Mac Diarmada last May - the Green & Gold will be on the road in 2017. Photo by Willie Donnellan

Leitrim teams will be on the road next year with away games for the Senior, U21 and Minor teams after the Connacht GAA Council released the fixture programme for 2017.

Leitrim will face London in Ruislip on Sunday, May 28, 2017 for their first round clash in the Connacht Senior Championship with the winner taking on Roscommon in Hyde Park on Sunday, June 18, although the Connacht Council have warned that there may be a Saturday evening game.

The Connacht Senior Final is fixed for Sunday, July 9, with Mayo facing Sligo or New York on Sunday, May 21, the winner going on to face Provincial Champions Galway on June 11.

Leitrim fans had been looking at next year’s U21 Championship, the last before it is reduced down to U20, as a great opportunity as the Green & Gold will be looking to build on the Connacht Minor League winning team of 2014.

However, the U21s have been handed the toughest of draws as they are drawn away to Galway in the first round with the winners then facing All-Ireland Champions Mayo in the semi-finals, an away game if Leitrim overcome the Tribesmen.

In the Minor championship, Leitrim have been drawn away to Sligo in Markievicz Park in what will be the last U18 competition as the Minor will now be an U17 competition.

To accommodate players who might lose out when the age is reduced to U17, an U17 Connacht competition has been arranged but the away theme continues with Leitrim drawn to face Roscommon in Hyde Park, no date has been fixed apart from the Final which is incredibly down for July 8, the date before the Connacht Minor and Senior Finals.

In club competitions, it doesn’t get any easier with Leitrim drawn to face the Mayo champions on Saturday, November 4, a game that will be away from home as the last time a Leitrim team played the Mayo winners was Allen Gaels against Crossmolina Deel Rovers back in 2002, a team that featured Ciaran McDonald, James Nallen, current Mayo manager Stephen Rochford and new Leitrim Senior team trainer Michael Moyles.

In the Intermediate Club, Leitrim will again be away as the winners have been drawn away a Sligo, a scenario that will only change if Sunday’s clash between Ballinamore Sean O’Heslin’s and St. Molaise Gaels ends in a draw.

In the Junior Club competition, Leitrim will take on the Mayo winners but it is highly unlikely there will be a game as there is no eligible teams in the Junior A Championship in the county.

Leitrim again get their new year under way by facing Galway Mayo IT on Sunday, January 8, in the FBD Insurance Connacht League with a home game against Galway the following week and concluding with a trip to Sligo to face the Yeatsmen.