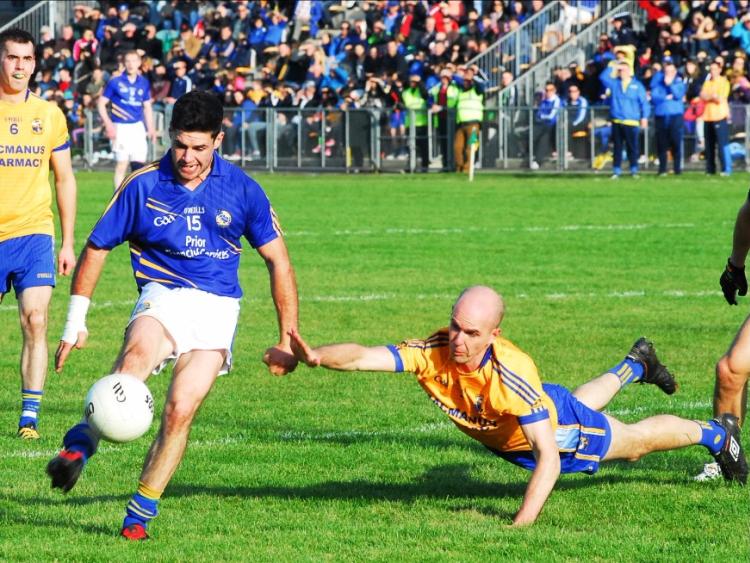 Ciaran Gilheany strikes for a point against Glencar/Manorhamilton. Photo by Willie Donnellan

Finding the necessary intensity is not a problem you’d associate with Aughawillan but manager Tommy McCormack insists his charges need to raise their intensity even more against St. Brigid’s.

Aughawillan have had just one League game since they defeated Glencar/Manorhamilton in the County Final on October 9, and Tommy agrees that League football is not the ideal preparation for the Connacht Club Championship.

“There wouldn’t be the intensity that is required for championship football in those League matches, no taking anything away from the opposition,” said Tommy, “You won’t get the intensity you need.”

Injury wise, Aughawillan report a clean bill of health but may be missing midfielder Sean Fox due to studies - “We had a few knocks since the County Final but we should be pretty ok for Sunday, we should have a full panel. Sean Fox has taken time out on the exam front, a big loss Sean.”

Tommy was a very interested spectator at the Roscommon County Final but believes St. Brigid’s will be a very different team next Sunday - “We watched their Final against Padraig Pearses, you can never really tell too much from these type of games because teams express themselves differently when they go into Connacht or Leinster, into the Provincial game.

“Even Mullinalaghta there the last week against Stradbally in Laois, they expressed themselves differently from the domestic scene and played very good.”