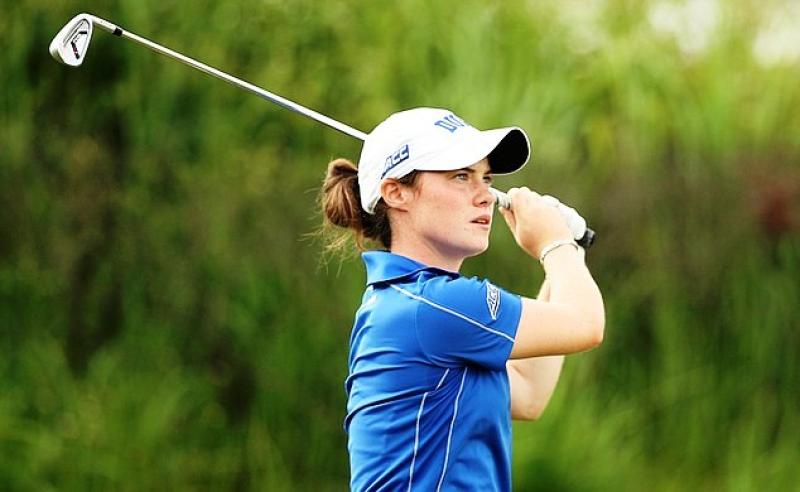 After easing through LPGA Qualifying School Stage II in October, Leona Maguire (Slieve Russell/Duke) had her eyes firmly focused on Qualifying Stage III to be played at Daytona Beach, Florida next week. She has however opted not to pursue life on the LPGA tour, just yet. Instead she will concentrate on gaining her degree from Duke University and continue to play amateur golf for the foreseeable future.

“Upon considerable deliberation, I have decided to withdraw from stage III of LPGA Q-school and not pursue LPGA membership for 2017. This is not a decision that I have taken lightly but one that I feel is best for me in the pursuit of my long-term aspirations. I am thankful for the continuous support of my parents, friends, teammates, Coach Shane O Grady, ILGU and everyone at Duke and for their guidance in helping me to reach my decision.”

Maguire is studying Psychology, Business and Accounting at Duke University and hopes to graduate with her degree in the summer of 2018.

“Being a student-athlete at a distinguished institution such as Duke is a once in a lifetime opportunity and not something I am willing to forgo. Not only do I get to obtain a world-class degree but I can utilize some of finest golf and athletic facilities in the country here at Duke.  I have greatly developed as both a player and person since starting at Duke and am confident that another year and a half of playing collegiate golf will further aid me in all aspects of my preparation in becoming a professional golfer. I pride myself in putting 100% commitment and effort into everything I do and it is important for me to honour my commitments to my team and Duke while still pushing myself to become the best golfer I can be.  Being part of the Duke Blue Devil family is both an honour and privilege and I am excited to have the opportunity to graduate with my teammates and classmates in 2018. I am fortunate to have had some incredible experiences this Summer competing at the Olympics and in the British and US Opens that reinforced my desire to play professional golf. Maguire’s record at amateur level had been phenomenal and her contributions to team events in 2016 alone, have been undeniable.”

In June 2016, Leona played a substantial role in GB&I's Curtis Cup victory against the USA. Most recently however, Maguire helped Ireland capture an historic Bronze Medal at the World Amateur Team Championships – Espirito Santo. Leona, alongside Olivia Mehaffey and Annabel Wilson were the first Irish team to medal the WATC.

“My dream is and always has been to compete alongside the world’s best on the LPGA and this remains resolutely unchanged. It is my intention to turn professional after graduation in May 2018 and I look forward to enjoying many more unforgettable experiences representing Duke, Ireland and myself as an amateur golfer until then.”

Leona Maguire secured the Smyth Salver Trophy after finishing the RICOH Women's British Open as the top ranked amateur. The highlight of Maguire's season can be pinned to her performance in Rio during golf's return to the Olympic Games. Having succeeded to qualify among only three amateurs, she placed T21st alongside her team mate Stephanie Meadow who finished 31st.  Maguire won the European Ladies' Amateur Golf Ranking's gold medal for the second successive year as well as defending her position as World Leading Women's Amateur which gained her a second WAGR's Mark H McCormack Medal.