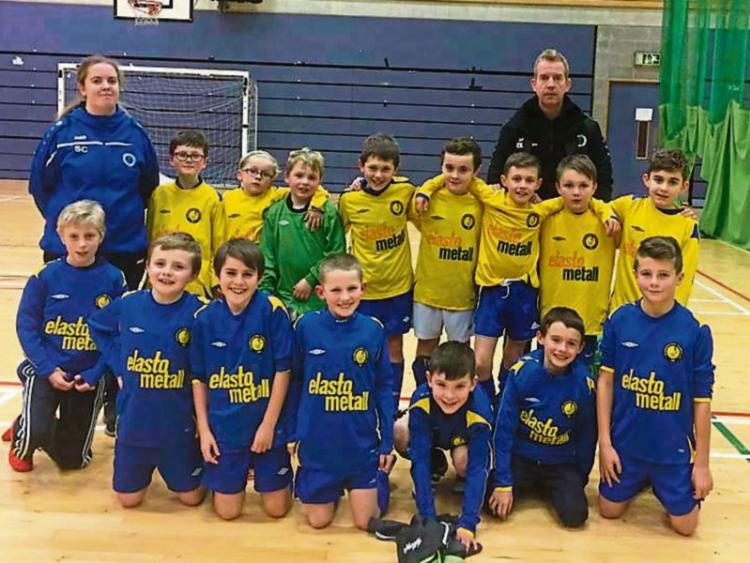 Saoirse Cummins and Dave Cummins pictured with some of Manor Rangers' U-10 futsal players in IT Sligo's Knocknarea Arena on Sunday last.

Super League: The Manor Rangers senior team, under the guidance of Alan Gilligan, are now in fourth place in the Great Southern Hotel Sligo Super League table after recording a comprehensive 5-2 win over Ballymote Celtic in the Bee Park on Sunday morning last. Two goals from Seamus Ryder and Alan Hickey and one from Anthony McDonald were enough to take all three points. Manor dominated this game and could easily have added to their tally but were denied by the woodwork on no fewer than five occasions. While Manor Rangers were full value for their win, once again goalkeeper Paul Scanlon was to the fore was again excellent with three first class point blank saves.

Girls U14: Manorhamilton girls U-14 enjoyed a comprehensive win over Arrow Harps today at cleveragh. Three nil up at halftime thanks to two goals from Muireann Devaney and one from Erin Somers. The girls increased the pressure on their opponents in the second half with good passing play and clinical finishing. Murieann Devaney scoring a second half hat trick,Erin Somers completing her hat trick and a final strike from Keira Dalton. Well done all.

U18 Boys: The U-18 boys team were in action in the Bee Park on Saturday afternoon and recorded a 3-3 draw with Ballisodare in what was a thrilling encounter. Manor opened the scoring when Jack Kelly took full advantage of a mistake in the Ballisodare defence to give the home side an early lead. The visitors levelled matters on the stroke of half-time but Manor regrouped well as they looked to regain the lead when the second half got underway. Andrew Loughlin and Jack Kelly both went close to finding the Ballisodare net before Mark McGee finished brilliantly after a Luke Tansey cross to edge Manor back in front. Manor extended their lead when Shane Fowley rose highest to head home a Shane Walsh delivery to put them 3-1 to the good. However, Ballisodare finished the game strongly and two late goals saw them emerge with a share of the points.

U10 futsal: Manor Rangers U-10 futsal teams under the guidance of Saoirse Cummins and her assistant Dave Cummins had a very positive afternoons football in IT Sligo on Sunday last. They took part in twelve games and left the Knocknarea arena undefeated. This brings an end to phase two of the futsal Programme. The boys were a credit to their club and have showed huge improvement and a willingness to learn. There were great performances from all the boys. Special mention to two of our missing warriors unable to attend due to injury Ronan Fox and Rudi O'Snodaigh. Well done to all. Thanks to our band of supporters today also.