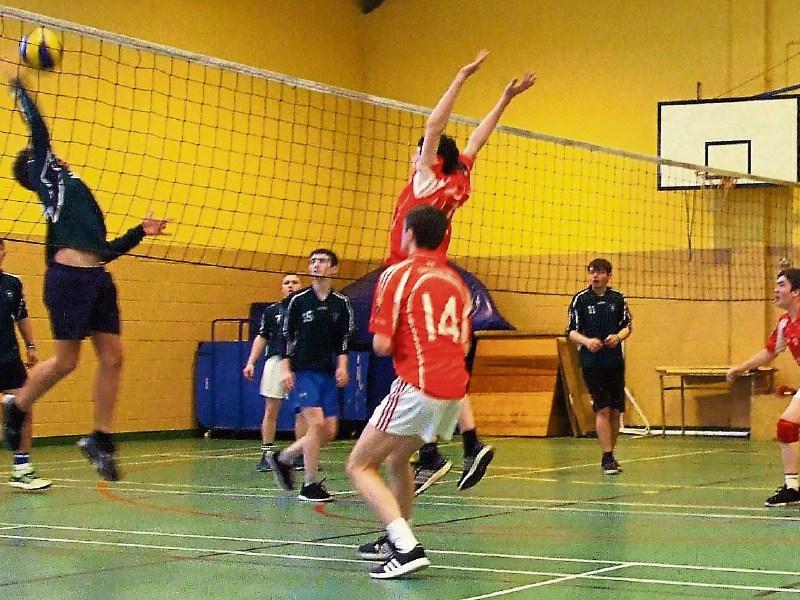 Drumshanbo VS got the perfect pick up last week following the very tough defeat of the seniors to eventual champions St. Raphael's Loughrea.

The countries top five cadette schools met to finish off the qualifiers. A stumbling start in this completion meant that nothing was assured for Drumshanbo. But, by the end of the day, Drumshanbo were the only unbeaten team and topped the qualifiers league, thus emulating their older schoolmates of last year.

This match was a revelation. Glen Ryan’s Dungarvan have been hovering around since the late noughties. Last year they began to move up. They beat Drumshanbo B on the way to the Senior B final and won the National Cadette B final. They did not have success at senior A but entered this cadette match unbeaten.

For Drumshanbo, they had a whole new first six. Last year’s sub Diarmuid McKiernan play a significant part as a libero and his trawling around the middle of the court meant that Dungarvan would find it hard to find any space. He was to marshal the back court throughout the day.

Early on Fergal Moran tormented Dungarvan with winners as Drumshanbo raced 7-2 ahead, whereas captain David Gallagher set up winners late on to put Drumshanbo 21-12 on top. However, Dungarvan fought well and won many spikes before the end of the set.

The second set was very close. It was level nine times before Dungarvan went two ahead. But Drumshanbo made less errors. Gareth Gilmartin who had starred in defence in the first set, now launched a wave of attacks.

Drumshanbo jumped 16-12 ahead on Gallagher’s serve. Back came Dungarvan and it was still anyone’s game at 20-19. Barry McWeeney came on and, with good sets and two serves helped Drumshanbo over the line.

Since their arrival as one of the top schools, Mallow had always beaten Drumshanbo at cadette. Moreover, all of their squad had appeared in one of the last two Junior finals.

Drumshanbo had appeared in neither. They looked very strong and should have beaten Brigid's in their earlier match.

Drumshanbo though, got the perfect start of 4-0 on Peter Winters serve. Winters had been setting well all day. Back came Mallow to 4-4 and for nearly all the set would sneak a point or 2 ahead only for Drumshanbo to fight back.

Gallagher got onto to certain Mallow winners and it was his ace that finally got a lead at 23-22. Mallow levelled but Aidan McCormack, whose cool play in the opening game had tormented Dungarvan, served Drumshanbo out to a very exciting win.

The second set was an extraordinary contrast. Once Fergal Moran raced Drumshanbo 7-1 ahead, the game hit a strange pattern. All six Drumshanbo players missed their serves, so from 7-4 to 19-11 Mallow did not win a single point of their own making.

This was due to unbelievable defending on Mallow spikes and Fergal Moran punishing severely at the net. Then it was Collin Moran’s turn. He did not miss serve and towered down at Mallow with some unstoppable spikes. Mallow scramble to 15-20 but Gilmartin served Drumshanbo home from there.

Dungarvan shocked St. Brigid’s Loughrea to open the door to Drumshanbo to earn top seed for the second year running as they head for semi-finals in January. It will be Drumshanbo’s 23rd Cadette A semi-final whereas it’s Dungarvan’s first ever A semi final! Still, it looks like the closest ever contest ahead between the remaining four teams.

Drumshanbo lost to Loughrea 19-25 25-21 5-15 and beat Elphin 25-16 25-23 in earlier outings. In a challenge at the start of the day, Chris Boyle impressed on serve, Emmett Moran on volley sets, Cathal McGourty hit a spike winner and Sean won a point with a well disguised dump.