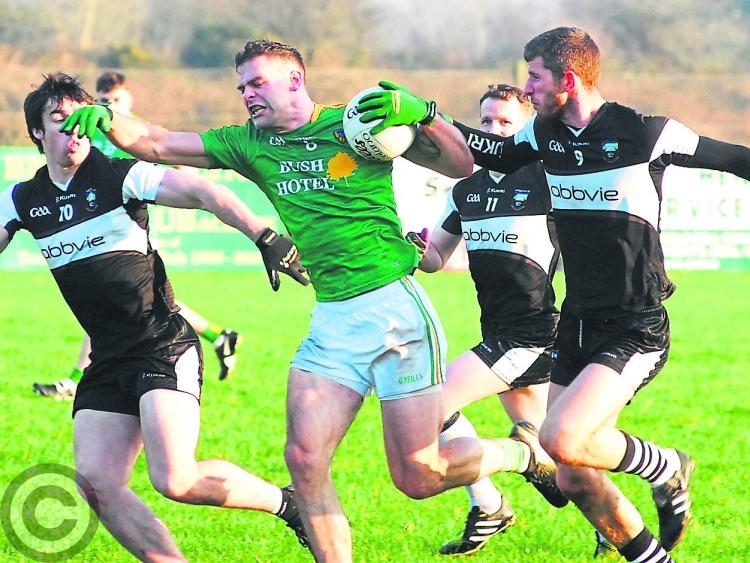 With the result of last Sunday's final FBD League game largely irrelevant, both sides used the game as preparation for the upcoming Allianz League and there are aspects of the game that will both please and frustrate both managements.

After a very slow start against Galway a week earlier, Leitrim would have been hoping to settle quicker in Tourlestrane but unfortunately that didn't prove to be the case as there was just over a minute played when Sligo's Niall Murphy struck for the game's opening game.
Sligo grew in confidence from that quick start and went on to dominate the opening half, establishing a 12 point lead by half-time.
The fact that Leitrim managed to reduce the deficit to just three points by the time the full-time whistle sounded illustrates the improved performance produced by Benny Guckian's team but it must also be pointed out that the agreement between the sides that there would be unlimited substitutions meant the competitive edge disappeared from the contest after the break.
Looking for positives, it was largely the young faces impressed. Gary Plunkett was central to much of Leitrim's good work while Oisin Madden, Ryan O'Rourke, Jack Heslin acquitted themselves well when they were introduced while captain Donal Wrynn always looked to lead by example, his powerful bursts through midfield a notable feature of the second half surge.
While Sligo manager Niall Carew may have been left frustrated by his side's second half showing, he was pleased with the opening half produced by the Yeats County as they proved too strong for Leitrim in every area of the pitch.
The opening score, Niall Murphy's goal, was followed by points from Mark Breheny (free) & Adrian Marren as Leitrim struggled to assert themselves on the contest. The game was almost five minutes old before Leitrim registered their first score.
An excellent diagonal pass from Wayne McKeon released Brendan Gallagher who found his brother Conor and he applied a fine finish to open Leitrim's account.
Unfortunately that was not to signal the start of the Leitrim revival as the movement and pace of Niall Murphy was something the Leitrim full-back line was having real difficulty coping with. Having lost his marker, Murphy was able to fist the ball over the bar. That score was matched by an excellent point from Gary Plunkett who pointed with the outside of his boot from distance.
With the game still barely 10 minutes old, Sligo upped the intensity further as they began to take control. A Breheny free was followed by a Neil Ewing point after the centre-back was allowed far too much space in which to roam.
Three further unanswered points from Breheny (free), Murphy, Keelan Cawley extended the Sligo lead before they struck for their second goal in the 20th minute.
Adrian Marren's ball to Mark Breheny left the Leitrim defence exposed and Breheny used all his experience and know-how to sidestep the challenge of Philip Farrelly before dispatching his shot to the net.
Sligo added to their tally with another Marren free before Leitrim hit back with a point from Gary Plunkett which kick-started Leitrim's best period of the first half.
Emlyn Mulligan, Jack Heslin and Mark Plunkett were all heavily involved in an incisive move that resulted in another point from Gary Plunkett. Moments later Leitrim scored their fifth point of the afternoon when Brendan Gallagher raised a white flag.
The introduction of Mark Plunkett and Jack Heslin was having a positive effect on the Leitrim team but their momentum was somewhat disrupted when James Rooney was given a black card following a clumsy, rather than dirty, tackle.
Sligo regained the initiative for the remainder of the half with three points in quick succession from Murphy, Marren and Patrick O'Connor before Leitrim's Nevin O'Donnell completed the first half scoring with a late free.
Trailing 2-12 to 0-6 as the second half got underway it looked as though it would be a case of damage limitation from a Leitrim point of view but the fact that both sides agreed to unlimited substitutions meant the game was not yet over.
An Emlyn Mulligan free opened the first half scoring before Niall Murphy hit back with what would prove to be Sligo's only point of the second half.
Sligo changed almost their entire team during the course of the second half and as a result the intensity dropped considerably from the contest.
As the second half progressed, at a much slower pace than the opening half, Leitrim slowly gained the upper hand. Points from Wayne McKeon, , Emlyn Mulligan (free) and a fine score from Ryan O'Rourke reduced the deficit to nine points with 15 minutes remaining.
The closing stages of the game were dominated by the green and gold with further points from Brendan Gallagher, Keith Beirne (three), Emlyn Mulligan and Donal Wrynn leaving just a goal between the sides as the game approached its death.
Ultimately that was to be as close as Leitrim would get to their opponents and attention now turns to the opening round of the Allianz National League when Leitrim travel to face Wicklow in Aughrim on February 5.