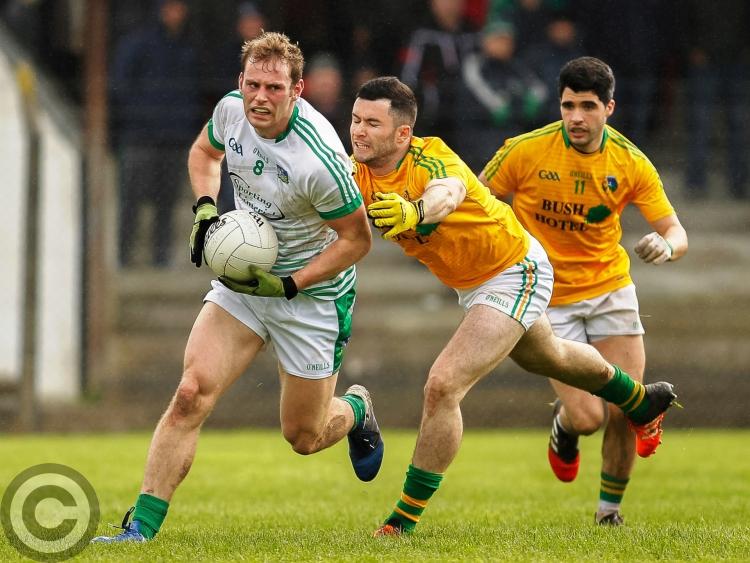 Limerick's Darragh Tracey in action against Nevin O'Donnell in the fifth round of the Allianz League Division 4 clash in Newcastlewest on Sunday. Photo by Conor Wyse

Leitrim will play their Allianz League Football for 2018 in Division 4 after the door was officially closed on promotion in Newcastlewest on Sunday.

Limerick's 2-11 to 0-15 victory over Brendan Guckian's team means that Leitrim cannot catch either Wexford or Westmeath with two games remaining after both recorded convincing wins on Sunday, Wexford actually confirming their place in Division 3 next year with a 0-15 to 0-9 victory over London.

Westmeath's 0-19 to 0-14 win over Wicklow means that the Green & Gold cannot catch the Midlanders despite a strong showing in Newcastlewest from Leitrim as the visitors recovered from a six point halftime deficit to close the gap to just a point with five minutes left.

Leitrim couldn't draw level and another late Limerick point sealed just their second win of the campaign. The home side had a goal in each half from Iain Corbett and Darragh Treacy. The first goal came after Cian Sheehan was tripped for a penalty, Iain Corbett scoring from a rebound after his initial effort hit the post.

Limerick led 1-7 to 0-5 at the break but Leitrim had the breeze in the second half and fired over four of the first five scores of the second half. Unfortunately, Limerick's score was a goal from Darragh Treacy that left them six points clear again.

Leitrim staged another rally with four points but although they closed the gap to a point at 2-9 to 0-14, two frees from Sean McSweeney ensured victory for the home team.

Emlyn Mulligan led the way with five points from frees while Nevin O'Donnell had four points, three from frees, as Leitrim now face into their last two games against London and Waterford knowing that the promotion dream is over.

It was also a disappointing weekend for the Leitrim Ladies and Minor Men's teams. The Ladies lost 3-10 to 3-6 to Roscommon on Saturday in Ballinamore, a result that leaves them in danger of missing out on the League semi-finals with difficult matches against Tipperary and Meath to come.

The Minors suffered a 2-8 to 0-9 loss against Mayo in Charlestown on Saturday, their second loss in the competition, but a much improved showing nonetheless.

SEE THIS WEEK'S LEITRIM OBSERVER FOR FULL REPORTS ON ALL THREE MATCHES.