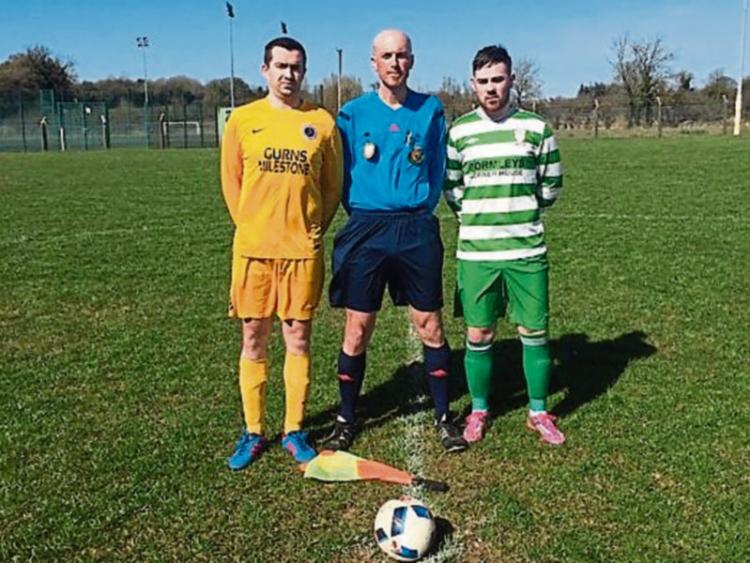 Manor Rangers proved too good for Ballymote Celtic on Sunday afternoon last when the sides met in the Connacht Cup.

Two goals from Niall Walsh as well as strikes from Paul Lonican, Brian McDonald and Paddy Woulfe were enough to secure a place in the last eight of the competition for Alan Gilligan's side.

On a sun-drenched day in Ballymote, Manor got off to the perfect start, scoring the opening goal within a minute of the kick-off.

A long throw from Brian McDonald was headed into the path of Niall Walsh by Seamus Ryder and Walsh made no mistake with his deft flick finding its way to the Ballymote net.

Manor showed no sign of resting on their laurels after that early goal and should have extended their early lead as they dominated matters during the opening exchanges.

Despite Manor's early pressure it was Ballymote who were to score next as they equalised with the game still barely 10 minutes old.

Mark Irwin had the relatively simple task of dispatching the ball to the net from close range after Adam Cunnane got the better of two Manor defenders and delivered a dangerous ball into the box. Manor's hesitant defending was punished fully as Irwin had the easy task of scoring from just two yards.

Manor responded well to that setback with Paddy Woulfe unlucky not to find Seamus Ryder with a good cross while Niall Walsh forced the Ballymote goalkeeper into a good save after some excellent play from Brian McDonald.

Manor Rangers deservedly retook the lead approaching the half hour mark. Paddy Woulfe's corner was flicked towards the back post by Seamus Ryder where Alan Hickey was waiting. Hickey showed good awareness to pick out Paul Lonican who dispatched his shot to the Ballymote goal.

Manor continued to pile the pressure on the Ballymote defence as they looked to increase their lead before the interval.

Niall Walsh, Brian McDonald and Alan Hickey all asked questions of the Ballymote defence but were unable to find a third goal.

The failure to capitalise on those opportunities almost came back to haunt Manor on the stroke of half time as Ballymote will feel they should have levelled matters before the break. Robbie Flannery did very well to release Mark Irwin but with the goal at his mercy Irwin failed to make a proper connection with his shot and the chance was gone.

Ballymote started the second half brightly and it needed the intervention of Paul Lonican, who made an excellent tackle, to ensure a promising attack from Ballymote came to nothing.

The importance of the next goal was clear to all and Paddy Woulfe looked as though he could trouble the Ballymote defence every time he was in possession. Having beaten a defender Woulfe shot towards goal but was denied by Ballymote goalkeeper Brendan Lowry.

Barely five minutes later Woulfe was presented with another sight of goal and on this occasion he made no mistake. An excellent delivery from Niall Walsh was met by Woulfe with a fine header to give Manor a two goal cushion.

That lead became even more comfortable from a Manor point of view just three minutes later. Seamus Ryder and Alan Hickey were both heavily involved in the build-up and when the ball was played to Brian McDonald he beat one defender before placing his low shot out of the reach of Brendan Lowry.

Sub Robbie Cunningham was central to Manor's fifth goal which ended any doubt as to the ultimate outcome of the contest. his defence splitting pass was measured to perfection for Niall Walsh who made no mistake as he shot low and hard past Lowry.

Cunningham arguably should have extended Manor's lead shortly afterwards but was unlucky to see his shot go just wide of the Ballymote post.

Ballymote Celtic scored a consolation goal before the end of the contest with Jack Hever taking advantage of a mistake from substitute goalkeeper Gary Hickey.

Niall Walsh had a chance for another goal but his delicate lob landed on the roof of the Ballymote goal.