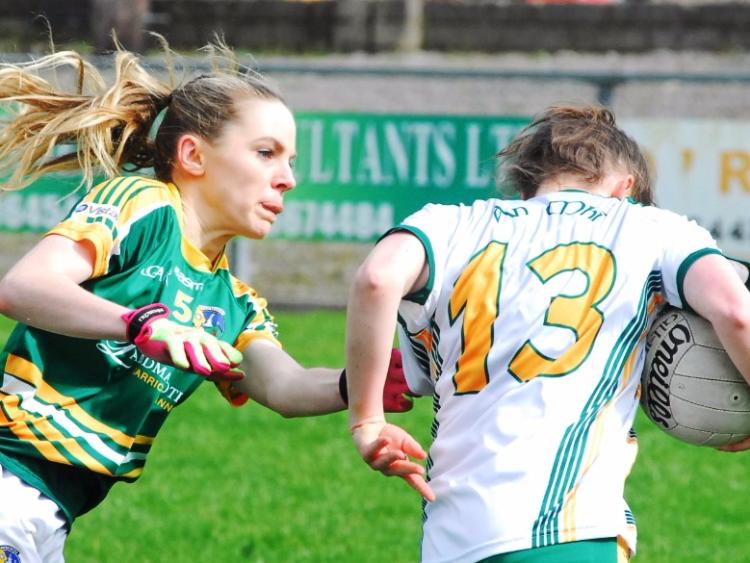 Leitrim brought their Lidl NFL Division 3 campaign to a winning end on Sunday last in Ballinamore with a four point win over Meath but similarly to the men a day earlier, the margin of victory should have been greater.

Three first half goals laid the foundations for the Leitrim victory but a knee injury sustained by Aoife Fox early in the second half dealt Leitrim a blow they struggled to recover from as Meath fought their way back into contention, reducing the deficit to a solitary point before Leitrim finished strongly to record their third  win of the year.

The absence of Aine Tighe, through injury and Dearbhaile Beirne's involvement with the Ireland U19 soccer team deprived Leitrim of two attacking talents that any team in the country would miss but in their absence Ailbhe Clancy, Roisin Fowley and Michelle Heslin impressed as their performances helped lessen the impact of the loss of two influential players.

The game began with Leitrim looking to seize the initiative from the throw-in but the home team were let down by some poor finishing.

After three early wides and an Ailbhe Clancy shot that was deflected wide, Leitrim opened the scoring when Clancy was on the end of a fine passing move that featured Emma Guckian, Eilish O'Dowd and Roisin McHugh before Clancy dispatched her shot over the Meath bar.

Moments later Leitrim were presented with an early goal opportunity but Laura O'Dowd's effort was sliced wide. Meath got back on level terms in the 11th minute when Fiona O'Neill pointed after an excellent left footed delivery from Vikki Wall who caused plenty of problems for Leitrim throughout the afternoon.

Leitrim wasted little time in regaining the lead with Ailbhe Clancy converting a free after Roisin Fowley was fouled and moments later they opened a clear gap for the first time when they struck for goal.

Roisin McHugh and Roisin Fowley linked up well to create an opportunity for Ailbhe Clancy who dispatched her shot to the Meath goal with a precise finish.

With 12 minutes of the half remaining, it was to get even better from a Leitrim point of view when Roisin Fowley pounced for a second Leitrim goal.

Emma Guckian and Laura O'Dowd combined well to release Fowley who managed to find herself in acres of space with the Meath defence marked absent. With only goalkeeper Orlagh McLaughlin to beat, Fowley made no mistake.

Meath responded well with three points without reply coming from Vikki Wall, Marie O'Shaughnessy and Niamh O'Sullivan but Leitrim were still dominating matters in midfield and hit back with a point of their own courtesy of Laura O'Dowd.

A pointed free from Meath captain Niamh O'Sullivan reduced the deficit to four points but Leitrim were to boss the remainder of the half and a second Roisin Fowley goal followed by an Ailbhe Clancy free gave Leitrim a commanding 3-4 to 0-5 interval lead.

Meath opened the second half scoring with a Blathnaid Keogh point shortly after the restart and worse was to follow for Leitrim when centre-back Aoife Fox's involvement in the game was brought to a premature end following a collision with Vikki Wall.

That injury seemed to rattle Leitrim who had looked very composed up to that point. After the injury, Meath scored three points in quick succession with two coming from Niamh O'Sullivan either side of a Fiona O'Neill score.

Leitrim lifted the siege they were under, briefly, when Bronagh O'Rourke scored an excellent point but Meath wasted little time in fighting back and scored four further unanswered points through Ailbhe McHugh, Vikki Wall, Niamh Crowe and Niamh O'Sullivan to leave just a point between the sides with 12 minutes remaining.

An excellent double save from Michelle Guckian preserved Leitrim's lead and to their credit, they finished the game strongly with points from Michelle Heslin (one free) and Carla LeGuen securing a hard earned victory.

Main Woman: This was a real team performance with the likes of Michelle Guckian, Aoife Fox, Roisin Fowley and Michelle Heslin among those who impressed.

Talking Point: Performing without Aine Tighe and Dearbhaile Beirne would test any team in the country but Leitrim coped well in their absence and recorded a deserved win.

Turning Point: Meath reduced the deficit to just a point, having trailed by eight earlier in the game. Before Leitrim regained control of the contest they had goalkeeper Michelle Guckian to thank for an excellent double save.

Ref Watch: Some second half confusion with regard the correct score was the main challenge for Gus Chapman to overcome.

Lowlight: Aoife Fox's injury six minutes into the second half was a blow Leitrim struggled to recover from as Meath fought their way back into the contest.