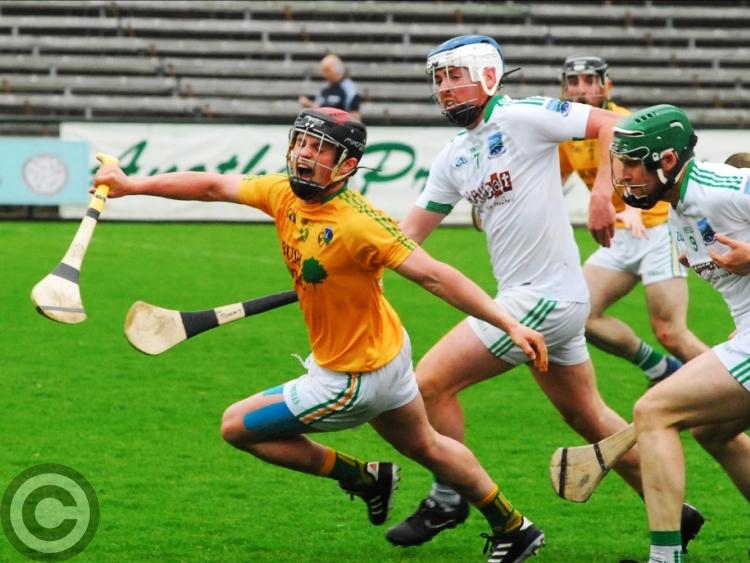 Leitrim's Cathal O'Donovan falls to the ground in the Lory Meagher Cup clash against Fermanagh. Photo by Willie Donnellan

It is hard to know who was more shocked at the final whistle - Leitrim who had lost a game they had dominated or Fermanagh to have stolen a game where they played second fiddle for long, long periods.

The concession of five preventable and soft goals sunk the Leitrim challenge as Fermanagh somehow conjured up a Houdini escape act as they trailed by six points with nine minutes of normal time remaining.

The damage was done in the first half when Leitrim conceded four goals that left them chasing the game and despite a fantastic performance, the effort in overcoming these body blows  proved too much.

Those defensive frailties shouldn't detract from an excellent display as the Green & Gold played some wonderful hurling and delivered a performance full of promise for the rest of the campaign.

Leitrim got off to a great start when Clement Cunniffe soloed through from the throw-in and fired over with just ten seconds on the clock. Padraig O’Donnell followed up with a bad wide but Fermanagh responded with scores from Sean Corrigan and Shea Curran after four minutes.

The tit for tat continued as Cunniffe  swapped points with Curran and O’Donnell converted a free from distance but then Fermanagh hit Leitrim for six with two goals in the space of a minute.

The first came when Padraig O’Donnell lost possession and Kevin McGrath couldn’t control a loose ball as Conor McShea breaking through to set up Shea Curran for a fine finish to the net.

The second goal was a disaster - McShea broke through but his weak shot was easily dealt with by keeper Declan Molloy. Incredibly, Molloy’s massively under-hit his clearance and McShea, who had run in to challenge Molloy, sprinted back out and pulled sharply, sending the ball to the corner of the net in a massive blow.

John Duffy put over a free before the impressive Karl McDermott made a good catch and scored and that sparked off a Leitrim revival with O’Donnell, from play, and two wonderful Cunniffe frees from either wing in the middle of the field cutting the gap.

But just as Leitrim were getting back into it, the Ernesiders struck for a third goal, a long ball seeing Sean Corrigan holding off some terrible bad defending to find the net.

Again Leitrim came back with O’Donnell converting two frees but when a Leitrim attack broke down, Fermanagh broke for Francis McBrien to point, Sean Corrigan adding another point shortly after.

Leitrim looked to have gotten a foothold  in the game when O’Donnell fielded a long delivery and held off his man, shooting from a tight angle to the back to the net to reduce the gap to three points.

But straight away, Fermanagh went down the field when Sean Corrigan broke through on goal after Leitrim defenders lost the ball, his weakly hit shot somehow evading keeper Molloy for a fourth Fermanagh goal.

O’Donnell finished the half with a free as Fermanagh led 4-6 to 1-10 and it was Leitrim who dominated the third quarter, started off when Cunniffe’s long ball was caught by O’Donnell who fired over.

Then came a moment of controversy that could have proved vital when Fermanagh’s Ryan Bogue had what looked from the stand, at least, to be a clear point but it was  waved wide by the umpires, despite it appearing to go clearly well inside the posts.

That unawarded point seemed to upset Fermanagh but Leitrim were producing some of their best hurling in years with O’Donnell hitting two frees either side of a good James Glancy score.

Fermanagh hit back with two frees from Sean Corrigan but Leitrim would come back with an unanswered 1-6 over seven glorious minutes.

Cunniffe put over a free from the middle of the park, Cathal O’Donovan pointed after great work from Colm Moreton before Liam Moreton surged through the middle to score and tie the scores.

Another Cunniffe free was followed by Leitrim’s second goal, good work from O’Donovan setting up O’Donnell for a blistering goal and O’Donovan got his second point with 15 minutes left.

When James Glancy got his second point, Leitrim led by six points with  14 minutes to go, Sean Corrigan’s point being matched by a Cunniffe free with nine minutes left.

Incredibly, Leitrim were not to score again and it was another defensive mistake that opened the door for Fermanagh, a long ball not being dealt with and Sean Corrigan pounced in style for a fifth Fermanagh goal.

Shea Curran’s snap shot under pressure narrowed the gap and a Corrigan free left just a point in it. Incredibly, Fermanagh levelled with just less than five minutes left when Corrigan scored a huge point from the corner.

The tension was  telling at this stage with sub Zak Moradi missing a chance before Corrigan proved to be the match winner with a hard fought score from the right corner despite fierce Leitrim defence.

Leitrim had one chance to earn a draw but Clement Cunniffe’s free from the middle of the park drifted wide and Fermanagh held on, pinning Leitrim back in defence during added time.

Main Man: Sean Corrigan and Padraig O'Donnell will take the plaudits with 3-8 and 2-8 respectively but Leitrim had a lot of outstanding performers. Colm Moreton was immense, Karl McDermott was outstanding in the first half while Clement Cunniffe lead by example all the way throughout.

Talking Point: This has to rank up there with the all-time heartbreaking losses for any Leitrim team, hurling or football! To score 2-21 and still lose is incredibly galling but if Leitrim can sort out the defensive errors that plagued them last Saturday, they could go far in this competition.

Turning Point: Sean Corrigan's third goal seven minutes from the end gave Fermanagh a lifeline as it cut a six point Leitrim lead in half; the home side lifted themselves incredibly in their drive for victory while the pressure seemed to get to the Green & Gold.

Ref Watch: James Clarke's umpires may have missed what looked like a clear point but the Cavan official did a good job.

Highlight: Leitrim's second half display up to the last ten minutes was probably the best sustained period of hurling this team has delivered as they bossed this game everywhere.

Lowlight: Five goals ultimately won this game for Fermanagh and the fact that all five of them came with the benefit of missed tackles, catches and terrible defending must leave the Leitrim players incredibly frustrated.