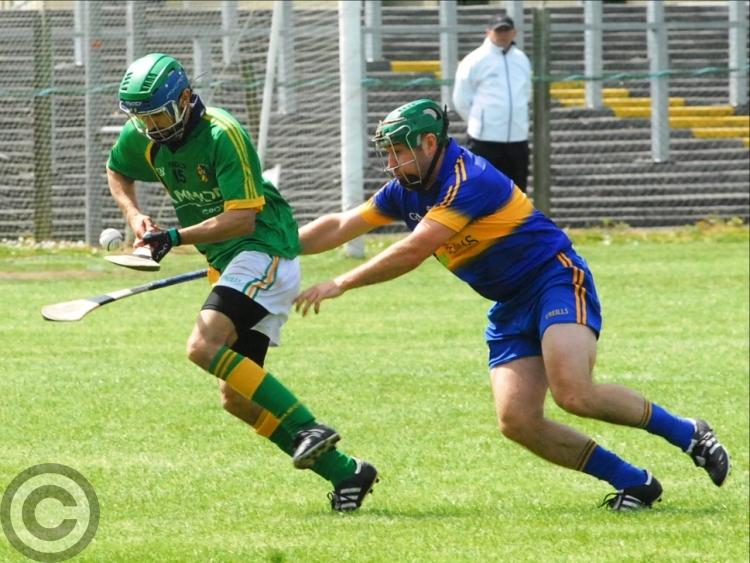 Lady Luck, missing against Fermanagh, shone on Leitrim hurlers last Saturday as they kept their Lory Meagher Cup hopes alive with a fortunate win over an unlucky Lancashire.

A mishit shot from the impressive Zak Moradi two minutes from time ended up in the net and put a lacklustre Leitrim in front and Clement Cunniffe sealed the win with a nerveless free past the three minutes of added time.

A draw would have been the least Lancashire deserved as Leitrim readily admitted they were cut with luck to emerge with a victory that keeps their Lory Meagher Cup campaign alive as they face Warwickshire next Saturday in Birmingham.

Leitrim started brightly and went into a three point lead inside  four minutes with Clement Cunniffe converting two frees from both sidelines and Zak Moradi making a nice catch to turn and score.

Lancashire had two wides before an 11th minute Sean Power free got the visitors off the mark and Nathan Unwin scored from distance.

Power put over a free on 15 minutes to tie the scores  but wides were costing them as a more economical Leitrim edged two in front with another Cunniffe free after a foul on Moradi and a nicely taken Liam Moreton score.

Leitrim had goal chances with Lancashire keeper  Vincent Morrissey saving a shot from Karl McDermott but a Power free narrowed the gap, immediately restored after another Cunniffe  free

Lancashire were now in control and Aidan Slattery’s fine catch led to a good point.

Leitrim almost goaled in bizarre circumstances when a Cunniffe free came off the outstretched hurl of a  defender, the sliothar hitting the crossbar before being cleared as Leitrim claimed for a goal.

Sean Power ended the half with two more frees either side of Cunniffe’s only score from play to leave the sides ties at 0-7 apiece at the break.

Sub Ronan Crowley saw an early free go wide while Moradi had a weak shot saved by Morrissey before Crowley edged Lancashire in front two minutes into the half.

Cunniffe’s freetaking was vital in this game and two successful 65s edged the home team back in front but a great run from Nathan Unwin saw the sides level on 14 minutes.

Lancashire had a massive escape when Moradi played sub Gavin O’Hagan through and his shot was goalbound only for  Liam Knocker to appear from nowhere to scoop the ball clear.

Lancashire regained the lead with two Crowley frees as Leitrim were growing visibly anxious, a Moradi point just keeping them in touch as both teams traded wides.

Leitrim keeper Declan Molloy made a good save from  Power but Lancashire looked set for victory as Crowley scored a massive effort from the wing and sub Shane Sexton pounced on a poor clearance to score to edge the visitors three clear with less than four minutes left.

Cunniffe converted a free before Zak Moradi intervened - Leitrim should have had what looked like a nailed on free but play was waved on, Moradi taking off on a run before his mis-hit shot ended up in the corner of the net.

Main Man: Clement Cunniffe, Zak Moradi and Conor Byrne stood out for a Leitrim team that never reached the heights of their previous games and it was this trio who kept the Green & Gold in the game. But the outstanding player on the field was undoubtedly Lancashire's Greg Jacob who really took off after Colm Moreton was substituted.

Talking Point: Leitrim are now down to a two-match series that could see them qualify for the Final. Leitrim will be without five key players for the visit to Birmingham next Saturday but a win over Sligo in the last game would see them contest this year's Lory Meagher Final. It makes for very exciting times for the hurlers.

Turning Point: Zak Moradi's goal got Leitrim back into a game where they looked lost.

Ref Watch: Can't fault referee Shane Hynes with a consistent display, was up with the play. Did miss a certain penalty for Lancashire though.

Highlight: Clement Cunniffe's injury time free summoned up memories of his late miss against Fermanagh. This time, there was no nerves as Cunniffe's aim was strong and true to snatch a Leitrim victory.

Lowlight: Leitrim were missing some players but this was not a good display as they lacked urgency and confidence.