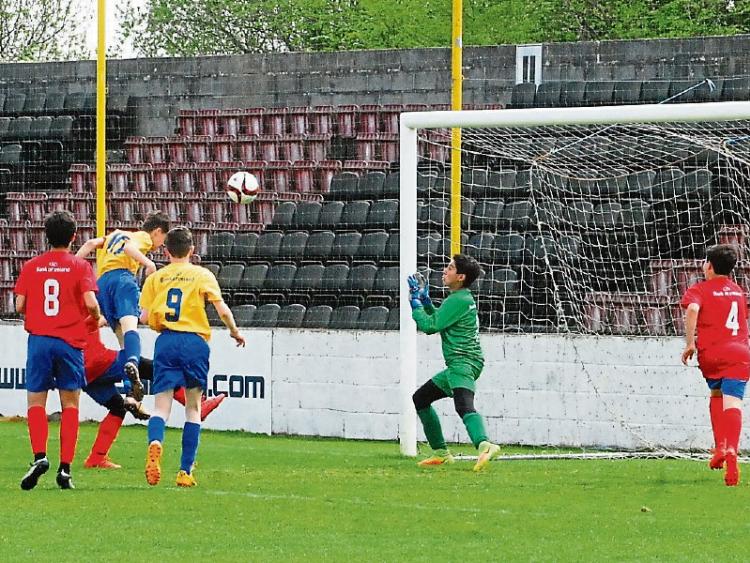 There can be no crueller way to lose a game than a penalty shoot-out and when it is a national final that slips away from your grasp due to the lottery of spot kicks the pain of defeat is magnified even further.

Unfortunately, that was the experience of the St Clare’s CS players who came up just short in last Wednesday’s Bank of Ireland FAI Schools first year All-Ireland Final when the Manorhamilton school were denied glory in the most difficult circumstances after what was a pulsating final against Bray school Dublin Oak Academy (DOA).

On a warm summer’s day, the sun shone down on Longford Town’s City Calling Stadium and the players produced a memorable final with the carnival atmosphere in the stands adding to the atmosphere and sense of occasion.

The opening stages saw St Clare’s settle to the task hand quicker with Matthew Connolly testing the DOA defence with a dangerous free which was cleared for an early corner.

DOA rallied well and showed their ability as an attacking force for the first time in the 12th minute. A free-kick, 40 yards out from goal, looked as though it would be delivered into the box but Alavaro Martin had other ideas as he struck a powerful shot towards goal. Fortunately for St Clare’s Shane Conlon was fully alert as he made a fine save.

A minute later DOA made no mistake when they were presented with a sight of goal. Gilberto Encinas did well to evade the attention of Evan Broughton after a good ball forward from Franco Fassi before getting a firm strike on goal. Once again Shane Conlon was on hand to make a fine save but he was powerless to prevent DOA’s centre-forward Marcel Toriello from forcing the rebound to the unguarded net.

Despite the chances that DOA had carved out, the Manorhamilton school never lost their composure as they set about trying to find an equaliser. Eanna Clancy was a bundle of energy in the heart of midfield alongside Cathal O’Connell and together they set the platform for St Clare’s to up the intensity further. The wingers, Alan Kavanagh and Gabriel Gilbride also started to become more influential as the half continued, with both eager and willing to take on the full-backs whenever possible.

A Cathal O’Connell shot from the edge of the box was dealt with relatively comfortably by Oscar Almaraz, while a free floated into the box by Eanna Clancy was volleyed over by Gabriel Gilbride.

Before the end of the half, St Clare's saw further chances come to nothing as Patrick Montgomery saw a header come back off the crossbar while a Matthew Connolly corner caused panic in the DOA box with the danger eventually cleared following an almighty goalmouth scramble by a combination of Oscar Almaraz and captain Alejandro Mtanous.

DOA had the first half-chance of the second half when David Villarreal headed wide from a corner but otherwise it was St Clare's who looked the more likely to score during the second half.

However, turning that pressure and dominance into scores was proving to be easier said than done. Diarmuid Giblin saw Oscar Almaraz dive at his feet to avert the danger while Eanna Clancy was very unlucky to see an excellent header after a fine cross from Cathal O'Connell hit the crossbar.

Eanna Clancy, who was at heart of much of St Clare's good play went close again when a free kick was curled just over the DOA bar and then saw a shot from distance well saved by Almaraz.

Patrick Montgomery, was then denied twice and with time running out it appeared as though St Clare's would have nothing to show for their efforts. However, with just three minutes remaining they got the goal their hard work and fine play deserved.

Barry McNulty's pinpoint delivery from the left was met perfectly by Patrick Montgomery with the outside of his outstretched right boot to divert the ball to the DOA goal and force the game to extra-time.

Tiredness and nervousness was evident within both teams during extra-time meaning the dreaded penalty shoot-out would be needed to separate the sides.

Eanna Clancy and Marcel Toriello both saw their efforts go over the bar in a shoot-out that was dramatic to say the very least. Patrick Montgomery, Alvaro Martin, Barry McNulty and Emilio Lopez were all successful from the spot meaning the sides were level after three penalties apiece.

Cathal O'Connell was very unlucky to see his penalty come back off the post meaning the advantage was now with DOA but Shane Conlon made a brilliant save to deny Alejandro de Santiago.

Gabriel Gilbride, Miguel Sabag, Dylan McDermott and Alejandro Mtanous were all on target meaning the sides were level after eight penalties each.

Matthew Connolly, who was a rock for St Clare's at centre-back was unlucky to see his penalty brilliantly saved by Almaraz and victory for DOA was secured when Sergio Flores showed nerves of steel as he unleashed a venomous strike that Conlon was powerless to keep out.