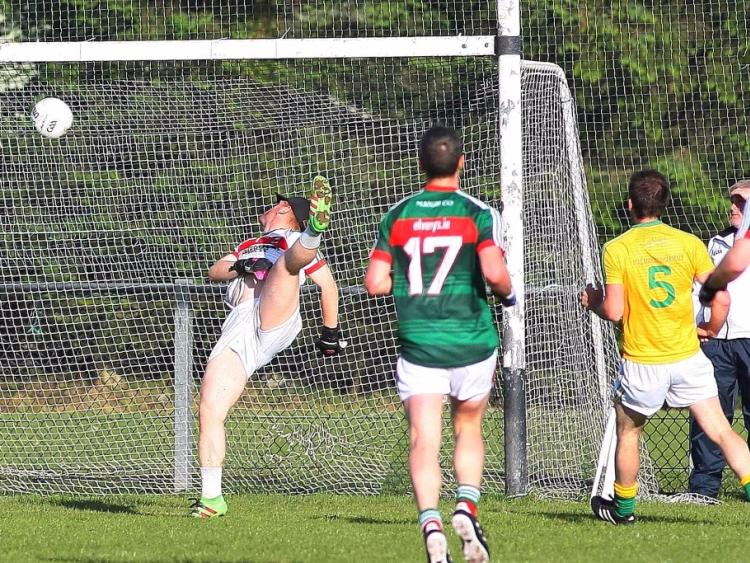 Leitrim's Connacht Junior Championship victory seemed highly improbable as Mayo cut through at will in the first 20 minutes last Wednesday in Fr O'Hara Park in Charlestown.

But a goal out of nothing, a goal from wing-back James Campbell transformed this contest and suddenly, it was Leitrim who were running Mayo ragged with some wonderful attacking football that left the home team helpless.

But true to form, nothing is that simple for a Leitrim team and a ferocious Mayo fightback, just when it seemed as if Leitrim had killed off their challenge, cut a six point lead down to just a point as the game entered added time.

Mayo had  momentum and the crowd behind them and it looked as if Leitrim were destined for extra-time. But when the pressure really came on, Leitrim responded and two Cathal McCrann frees ensured that  Leitrim claimed the Provincial Junior title for the first time since 2004.

Mayo's Mark Ronaldson pointed after just 35 seconds while James Carr ran through on goal but thankfully blasted wide. Cormac Gordon fired over after a  Leitrim were caught napping from a short Mayo free.

Brian Heneghan pointed on four minutes and Leitrim had a massive escape a minute later when Carr again missed a golden goal chance, driving wide after he left Alan Armstrong trailing in his wake.

Heneghan burst through for a point  but Domhnaill Flynn opened Leitrim’s account on 12 minutes with an excellent long range score.

Mayo, however, continued to dominate and points from Michael Forde, Heneghan and Ronaldson had them move six clear and in control.

Leitrim, however, got a bit of inspiration when Conor Gallagher scored a massive point from the corner and Cathal McCrann followed up immediately with a free, somewhat soft it has to be said.

Domhnaill Flynn landed his second from distance and suddenly Mayo were no longer as dominant although they should have found the net but Ryan O’Donoghue’s shot hit the woodwork.

Mayo were left cursing those misses when James Campbell raided from deep five minutes from the break. He went for goal but his shot seemed to rising over the bar only for Mayo keeper Mattie Flanagan to get a touch to the ball, killing it’s momentum and allowing it to drop gratefully into the net.

Leitrim were inspired and three further points from Keith Keegan, McCrann (free) and the excellent Flynn suddenly had the Green & Gold three in front at the break, 1-7 to 0-7.

Ronaldson again opened the scoring with a soft enough free but Mayo had Flanagan to thank for preventing an own-goal, the resulting 50 being played short to James Campbell for a fine point.

Mayo hit back with points from Ronaldson and James Kelly as Leitrim missed some great chances before they found their range in spectacular fashion. McCrann put over a free, Wayne McKeon scored from distance and then Gary Plunkett cut loose.

Three points in six minutes, three great scores from play, followed for Plunkett while Niall McGovern scored a good point and suddenly Leitrim were seven clear with 11 minutes to go. Leitrim looked home and hosed but Mayo found their drive again as Ronaldson and Heneghan both pointed inside 60 seconds.

Four more Ronaldson frees would followed in the final ten minutes as Mayo dominated the contest but missed two frees while Leitrim keeper Philip Farrelly made a fantastic save to deny Mayo sub Robert Holian a certain goal.

The gap was down to a point as the game entered added time but Leitrim were not for turning and two well worked breaks led to two excellently converted frees for Cathal McCrann and a thoroughly deserved Leitrim victory.

Main Man: Keith Keegan got the Man of the Match, deservedly so for a tireless and inspiring display, but few would have quibbled had Domhnaill Flynn, Gary Plunkett or Alan Armstrong got the honour as they all produced key contributions for Leitrim.

Talking Point: Leitrim's glorious win will have some unintended consequences as the All-Ireland Semi-Final is fixed for the same weekend Leitrim's Club Championship is due to start - meaning the Club campaign will probably go back a week.

Turning Point: James Campbell's goal, coming with a touch of good fortune, turned this game on it's head and infused Leitrim with real self-belief. Equally vital was a knock that Mayo's Michael Forde suffered in the first half - Mayo were not the same team after as Forde's influence waned.

Ref Watch: The decision to disallow a Leitrim goal was strange but Galway's James Molloy did a good job in an open encounter.

Highlight: Leitrim's second half display was immense, full of power and confidence but it was overshadowed by the manner the Green & God first grabbed a lifeline and then took control of the last ten minutes of the first half.

Lowlight: Leitrim's opening 20 minutes was absolutely dire as Mayo threatened to run amok, they really should have had three first half goals and they wouldn't have been flattered.