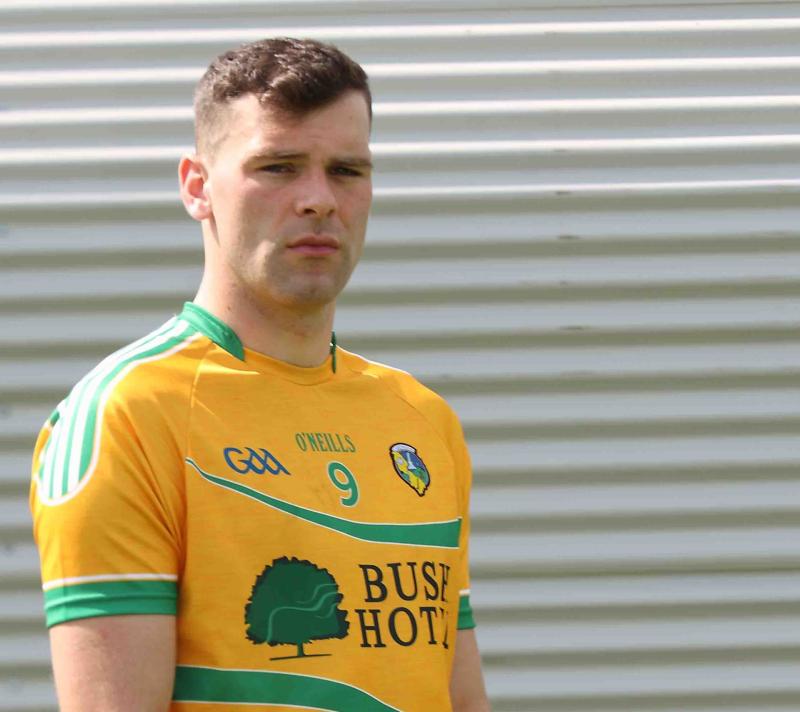 Although still only 23, Fenagh’s Donal Wrynn has quickly become one of the most established members of the Leitrim panel and this year he has been given the honour of captaining Leitrim into Championship action.

As well as being a leader on the pitch and a role model off it, another of the duties that falls on the shoulders of team captains is to speak to the assembled media which Donal did at the recent Connacht Championship launch at the superb Connacht GAA Centre of Excellence in Mayo.

Donal began his chat with the Leitrim Observer with a warm handshake and spoke with a real sense of pride about the opportunity he has been given to lead Leitrim into battle against London this Sunday in Ruislip.

“I’m very proud, it’s a great honour. When Brendan asked me at the time I was quite surprised because I still consider myself one of the younger players but it’s a great honour and I have enjoyed it so far. I’m just looking forward to leading us out against London and hopefully to victory.”

The role of captain is something that offers a degree of freedom as to how the role is performed. Some captain lead by example while others are more vocal. When asked how he has adapted to role Donal reserved praise for some of the older heads in the panel but doesn't think it has changed the way he plays.

“I wouldn’t like to think that it has no. In my mind I have just kept doing what I have always been doing which is training, doing what’s laid out for me in training, sticking to gym programmes and my diet and trying to be an example for the younger lads that are coming in.
“The likes of Emlyn Mulligan, Gary Reynolds, Ronan Kennedy, they’ve shouldered a part of the job. It’s worked for me in the sense that I am not too much older than the younger fellas and I can get on with them and get them on board. I can communicate with them possibly a little bit easier than the more ‘mature’ lads.”

Since he made his Championship debut against Roscommon in 2014 there has been a significant turnover in terms of players while the appointment of Brendan Guckian as manager will see Donal play under a third different manager in Championship action for Leitrim.

Reflecting on how it has been in the Leitrim camp since they last saw Championship action, a miserable day in Markievicz Park last summer, Donal reflected, “The decision was taken to change management. Obviously the players aren’t involved in that sort of stuff and rightly so.
“Player wise we have had the majority of the same personnel coming back. Kevin Conlan, unfortunately because of work, he’s based in Cork and it just wasn’t feasible for him to play with us this year.

“The majority of the panel came back, obviously there is a few retirements but the majority came back and there was a few young lads brought into the squad and they have brought an energy that re-energised the boys that have been there.”

Speaking about the attributes that the talented youngsters have brought to the panel there was a noticeable sense of excitement in Donal’s voice.

“The pace and creativity that the likes of Ryan O’Rourke, Jack Heslin, Keith Beirne and Oisin Madden have. They are young lads with a lot of potential, a lot of speed and a bit of fearlessness. It’s definitely brought a bit more competition to the panel for places.

“You are looking at these players coming through and you’re thinking it’s up to us to keep them out of the team. They brought that kind of energy to training and definitely upped the standard.”
As has been the case for the last number of years, the first goal at the start of the year was promotion from Division four.

When asked about his reflections on the league Donal’s initial assessment was one of frustration commenting, “Obviously not too happy finishing fifth.”

However, when reflecting on the games he was able to point to encouraging signs.
“There was quite a lot of new players on the panel so from that perspective there was a rebuilding element to our league campaign. Our ambition was to get promoted but that didn’t go to plan.

“Performance wise I thought the majority of our games were good performances. I think Wexford we performed quite well, Wicklow the same. Limerick in phases we played well even though we were beaten down there.

“Carlow we had to grind out a win which on other days we could have thrown that away but we stuck to our guns which I thought was as good as any win you could get even though we probably didn’t perform to our best that day.

“It was that getting over the line mentality that maybe we had been missing in previous years. The last two games we won as well.”

One of those final two league games was against Sunday’s opponents, London. Although Leitrim won easily, the message from the Leitrim camp that previous meetings will have no bearing was reiterated by Donal.

“We know that London will be a different animal when we play them over in Ruislip. It’s definitely going to be a difficult one with their new pitch and new stand.

“They have been looking at this opportunity for probably the last 12 months and saying ‘look we have Leitrim, let’s start building, let’s turn them over’. They’ll definitely be looking at us as an opportunity and we’re going to go over there with all guns blazing. We’ll do everything we can to get the win but it’s not going to be easy and we know that.”

The winners of Sunday’s clash will face Roscommon and the prospect of meeting the old enemy when they seem to be enduring a difficult year is something that is exciting many Leitrim fans but Donal is adamant all focus is solely on London.

“We’re taking nothing from what went on in Carrick-on-Shannon (in the league). We know they have been looking at the Championship game and neither of us had any chance of going up in the league so they weren’t going to be coming at us all guns blazing but we know that when we go over to Ruislip there is going to be a tough game ahead of us.

“I was asked earlier and I didn’t even know what the next round was, I knew it was Roscommon but I didn’t know when, we have just been totally focused on playing London.”