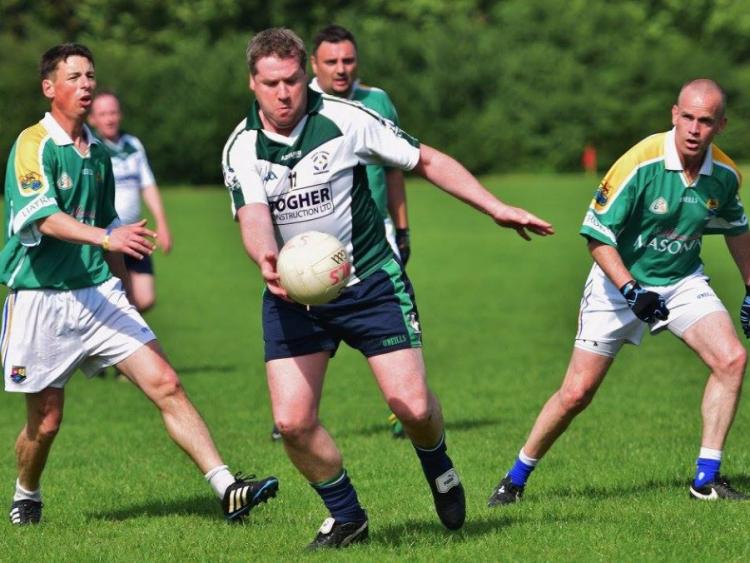 Leitrim Masters first outing of the year was a successful one as they defeated London by one point last Saturday.

On Saturday, the Leitrim Longford Masters, under the stewardship of James Breslin (Longford), Pat Flanagan (Leitrim), Seamus Sorohan (Leitrim) and some valuable input from Martin McHugh (could be a lot of places), took the early morning trip to London, and, on a day that nearly hit 30°C, took on The London Masters at Tir Chonaill Gaels fine facility in Greenford.

Before a very enthusiastic crowd, both teams served up a peach of a game which not only belied their years but the very severe conditions as well.

This was also despite the fact that the away panel had such an early start and had to endure over three hours packed into a minibus after an accident somewhere on the motorway created chaos. End result being , that the lads had to go straight to Greenford and tog out.

The game itself was full of flowing end to end football and went right down to the wire. The match which was heading one way then the other, was finally decided right at the death as the Leitrim Longford lads grabbed a last gasp winner.

It was very hard on the Masters newcomers but Leitrim Longford had shown huge heart and resilience throughout the game, when at times, London had been in the ascendancy and had threatened to pull away. The intensity shown by both sides was a credit to them and was almost up to Championship level. The final score of London 0-16 Leitrim Longford 1-14 tells a story in itself.

It must be recorded that the welcome and hospitality shown by our hosts was unbelievable. Everything possible was done to accommodate our visit and we were even presented with medals to remember the day.

The whole event was a monumental success and the Gaelic Masters Association can hold it's head very high. We wish David Igoe and The London Masters a very successful Championship and we look forward to maybe meeting them further along the road.

We would like to thank all our valued panel who made the trip. We know everyone had a massive weekend.

The plan now is to keep up the momentum with some competitive challenge matches and head into the Championship first round versus Donegal on July 15, with a nice bit of form behind us. We know now that if we put the work and commitment in, this could be a very exciting season.

We would also like to congratulate the Leitrim Seniors on a very fine win. With the day that was in it, it was a very tough assignment but the lads showed a lot of class and bottle when it really mattered.

Lastly. It was an unbelievable atmosphere in and around NW London as it seemed everyone in Leitrim had made the trip. The supporters as usual did their County proud.