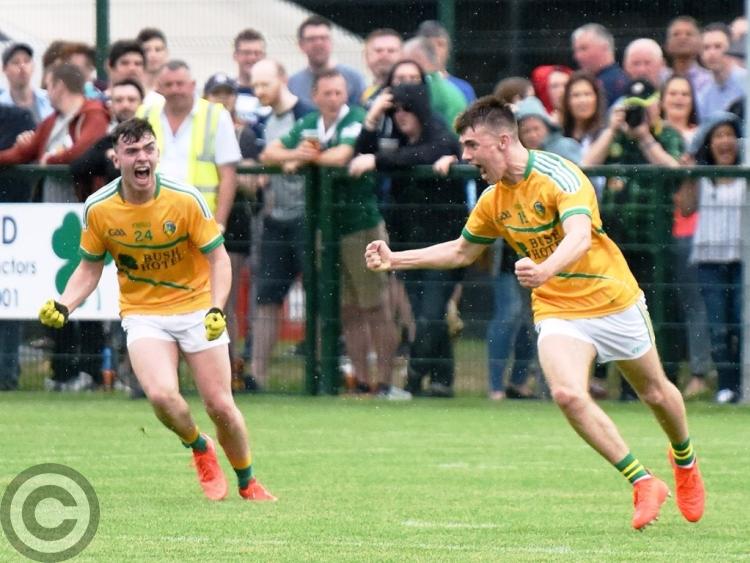 Leitrim ended their four-year wait for a Connacht Championship win at the redeveloped McGovern Park on Sunday but they will be under no illusions of the improvement that is required ahead of their semi-final date with neighbours Roscommon.

Ronan Kennedy was the matchwinner for the visitors, the Mohill clubman coming off the bench to score two goals in three minutes during a period where the Exiles were dominant.

Kennedy’s top-drawer finishes helped Leitrim turn a two-point deficit into a five-point lead but those two moments of attacking quality were all too rare on a stressful afternoon for the sizeable visiting support in the English capital.

Any team would miss a player of Emlyn Mulligan’s calibre and Leitrim’s attack certainly looked short on confidence. They were wayward from placed balls and as the wides began to mount, they were less willing to take shots on, instead running down cul-de-sacs and getting turned over.

Darragh Rooney was a notable exception, the tricky forward giving the London defence the runaround and sparking the game to life with a well-worked 20th-minute goal, while Damien Moran chipped in with a trio of  long-range points in a nine-minute spell.

But that can’t mask over the fact that Leitrim went scoreless for two 16-minute spells, something they cannot afford when they travel to Dr Hyde Park on June 18.

There was much fanfare prior to throw-in at Ruislip as the magnificent new stand was officially opened and that only increased when the London starting line-up was announced.

A collective gasp rolled around the ground when Owen Mulligan’s name was announced. Leitrim reacted by moving captain Donal Wrynn onto the Tyrone forward, but the attention Mulligan attracted created space for the outstanding Liam Gavaghan.

London born and bred, Gavaghan was the star performer as he kicked eight points and gave Ronan Gallagher a torrid time. But for some tired shots in the second half, Gavaghan would have reached double figures while his off-balance effort was saved by Brendan Flynn with nine minutes remaining.

Such an entertaining, end-to-end encounter didn’t appear likely during an error-strewn opening 19 minutes, where Leitrim dominated but failed to make it count on the scoreboard. The first moments of quality came from Damian Moran, who grew tired of looking for inside options and instead stroked over some wonderful scores.

That lifted Leitrim and they finally made their dominance count on 20 minutes when Brendan Gallagher’s defence-splitting pass found Rooney and the Melvin Gaels forward gave Gavin McEvoy no chance.

Another long-range cracker from Moran extended Leitrim’s lead to five and they looked on course for a comfortable victory, but they then lost their way as London rallied.

With Leitrim happy to concede short kick-outs, London slowly worked the ball upfield where Mulligan and Gavaghan began to combine to great effect. Gavaghan & Conor Doran both pointed in the space of a minute to cut the gap to two and it took some last-ditch defending to deny Ciaran Dunne a shot at goal in injury-time.

Leitrim led 1-6 to 0-7 at the interval but that was quickly cancelled out as London started the second half like they finished the first.

Rory Mason potted a free seconds after the restart and Mulligan drew London level on 43 minutes with a lovely strike with the outside of his boot.

Mulligan then turned provider for Gavaghan, who cut inside Oisin Madden to fist over. London led for the first time, were bossing midfield and Mason blazed a powerful shot narrowly over the bar to double their advantage.

Brendan Gallagher ended Leitrim’s barren spell from a free but they were fortunate not to concede a goal when Mason’s point attempt looped over Flynn and came back off the post.

That appeared to wake Leitrim from their slumber and they countered to devastating effect. With London going man-for-man at the back, they hand-passed the ball upfield, drawing markers before finding Kennedy, who blasted an unstoppable shot to the top corner of net.

Gavaghan responded with a point but Leitrim sensed blood and they exposed more naïve defending when a ball over the top found Kennedy and this time he curled the ball around the onrushing McEvoy.

Rooney restored Leitrim’s five-point lead on 56 minutes and that appeared to be game over, but they didn’t score again until injury time.

Flynn had to be alert to punch away a ball across his goal and he then denied Gavaghan from close range as London sought a way back into the contest. Leitrim indiscipline provided them with a route, and with six minutes remaining their lead had been cut to two.

London had chances to level but they were beginning to tire. Jarlath Branagan pulled a free wide while Ryan Jones was also off target, and Keith Beirne and Gary Plunkett popped up with insurance points late on to finally secure victory.

Too close for comfort, but once again Leitrim escaped from Ruislip with the win. Now the hard work begins ahead of the crunch clash with Roscommon.

Main Man: Liam Gavaghan was outstanding, kicking eight points.  The Exiles’ London-born skipper gave the Leitrim defence a torrid time and was unlucky not the find the net late on. Leitrim handed Donal Wrynn a man-marking job on Owen Mulligan and although restricted to one point, Mulligan was hugely effective as a link-up man with Liam Gavaghan.

Talking Point: Roscommon will not be quaking in their boots when they watch the video of this game. A spate of early wides sucked the confidence out of the Leitrim forwards and they were bossed around midfield for long spells.

Turning Point: Ronan Kennedy’s introduction. The Mohill man hit two goals in three minutes to put Leitrim  in front and both finishes were of the highest quality.

Ref Watch: Noel Mooney tried to keep his cards in his pocket but Leitrim should have received at least one black card for cynical fouling in the closing stages.

Highlight: It has been a long time coming but at last London have a ground worthy of hosting inter-county fixtures. Those involved have done a fantastic job in redeveloping McGovern Park.

Lowlight: The opening quarter was a borefest, the teams managing just three points apiece amid a plethora of handling errors and misplaced passes. Darragh Rooney’s goal sparked the contest into life.