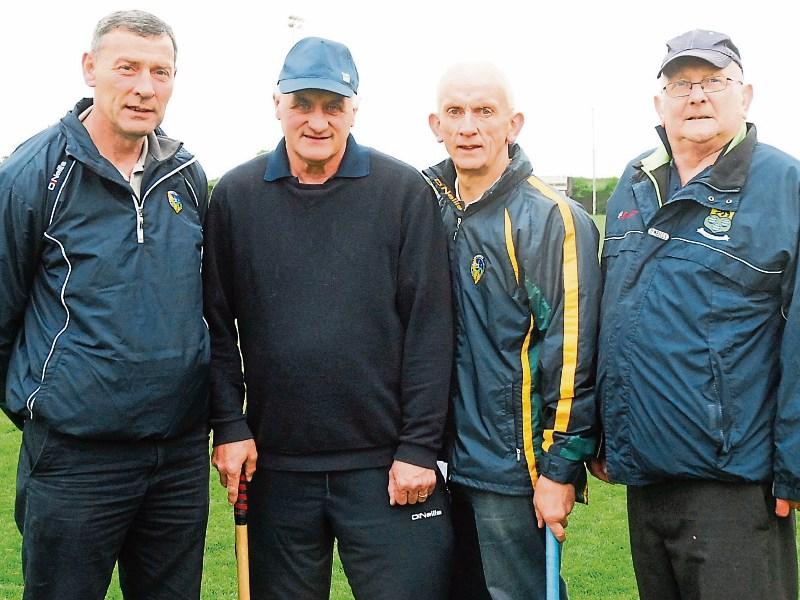 It is very different from his glory days as a Galway All-winner but coach Michael Coleman is the one man who can understand what the Leitrim hurlers will experience when they take to the hallowed turf of Croke Park next Saturday.

The Abbeyknockmoy clubman won an All-Ireland title with Galway in 1989, three All-Stars and three National Leagues but he is now firmly in the Green & Gold corner, thrilled with the achievement of the Leitrim hurlers in reaching the Lory Meagher Cup Final.

“Without a doubt, it is an absolute brilliant achievement for them,” Michael told the Observer, “It is the first time being there and I do know, after being involved for the last three years, the amount of work and effort that these players have put in is absolutely unreal.

“It is just recognition for what they have done and a fair achievement for them but at the end of the day, they got there and just the next day, to give a good account of themselves and see what happens.”

The obvious question is when someone from the hurling elite comes into contact with the minnows is to compare and contrast but Michael has been very impressed by the commitment of the Leitrim lads - “The standard of hurling is pretty good and the commitment is as good as I have seen in Galway or around other teams.

“Nearly all the players who are playing hurling with Leitrim are playing football so when you look at the population of Leitrim and if you narrow it down, you probably have a base of 3,000 eligible players and football would take 80, 90% of that.

“So you are really down to a small number of eligible players who would be able to be there or thereabouts. If you look at Galway, you are looking at 10 to 15,000 so it is a big difference. It is an achievement in itself that they stayed at it. They have a great camaraderie and they will take it on the chin whatever way it goes.”

Coleman’s impact on this Leitrim team has been immense as the skills of the County hurlers has improved tenfold since the Galway man first stood on the Leitrim sideline. But Michael emphasises that it is the work done by the players, rather than his own input, that is important.

“We have done a lot of work on the skills base and I think a lot of it is repetition. No matter how you go about it, you ask any county player or any club player, it is all down to continuously using the ball. A lot of these guys are all dual guys and in hurling counties, they are at it every day of the week.

“To give credit to these guys, they have worked at it, stayed at it and in the last two, two and a half years, they are beginning to put a game plan together. We keep it simple enough because the way we look at it, holding onto the ball, we don’t really go there, let’s play a simple game and use the players we have.”

Leitrim’s campaign saw them lose to Warwickshire in the group stages and Michael does not underestimate the size of the task ahead - “To be fair to Warwickshire, they are a very, very tough outfit.

“We were over in Warwickshire, it was a tough, tough encounter, granted we were missing a few players but I think so were they and what it came down, they just had that little more firepower and home advantage stood to them.

“You have to take your hat off to them, they are a very good outfit and have some extremely good players, a couple of them from Galway.”

Michael draws inspiration from Leitrim’s brilliant victory over Sligo - “Everything seemed to go right for us on the day, we got a brilliant start, got a couple of goals and got a good lead up.

“But what I’ve noticed in these games over the last few years, you might be five, six, seven or eight points up but all of the sudden, you are brought back fairly rapidly with a couple of goals going in. It is no fault of the backs, it is just the nature of the game.”

Michael has been touched the outpouring of goodwill for the Leitrim hurlers - “There is good support out there and I have to say that any time I’ve been up in Leitrim, I’ve been well looked after.

“I think people have bought into it and it is lovely to see Leitrim up in Croke Park. It is just great for the lads to get that opportunity, to be recognised and it is great for sport in Leitrim and I know football is very strong but they have taken great pride in this as well.

As for a prediction, Michael is determined that Leitrim produce their best - “I said to the lads, you are representing your county and you have an opportunity like this. A couple of years ago, we had a chance but were beaten by a point, last year a couple of points. At the end of the day, you’ve earned the right to get in there.

“Granted the occasion the next day is going to be tough but the one thing I say about the lads is they are actually looking forward to it. We’ve got the first bit of it done - we got to Croke Park. There is another step to do and we will see what we can do, we will have a run at it.

“It will be a faster game that what these guys are normally used to, the pitch is very big but it is the same for both guys. We have a chance to have a go at it and at the end of the day, it is about how they account for themselves but I think they’ll give a good account.

“I think the lads would know the way I operate, it is great to be there but at the end of the day, you have to get down to reality. There is still a match to be played, a match to be won, I’d say we have a chance in it which is great and if we focus, there is still only four lines, the scoreboard is still the same.”