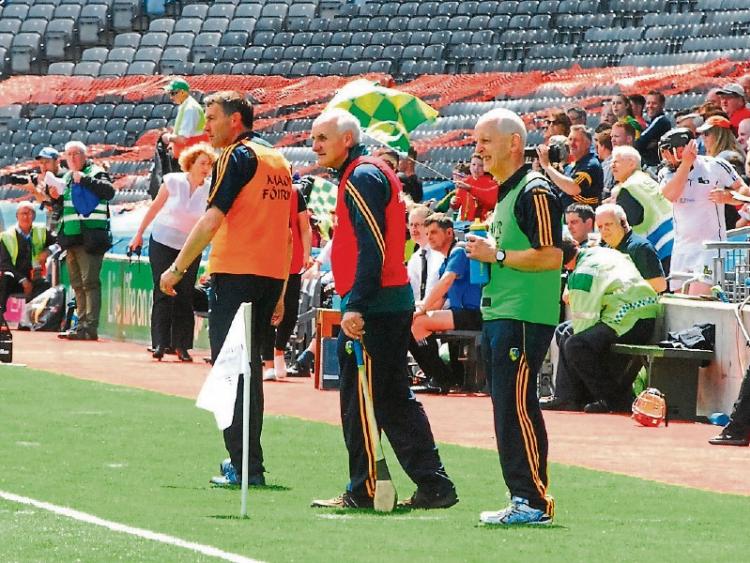 You could hear a pin drop in the Leitrim dressing room last Saturday in the bowels of the Hogan Stand, the silence underlining more eloquently than any words the disappointment felt by the County hurlers.

One man had to find some words but Martin Cunniffe was up to the task, his disappointment obvious but so too was the pride he felt at seeing a Leitrim hurling team in action in Croke Park.

And Martin admitted that Leitrim firmly believed they had a chance of lifting the Lory Meagher Cup when they addressed the team at halftime, the Green & Gold leading 0-10 to 0-8 against Warwickshire.

“The first half, fair play to the lads, they gave everything,” Martin told the Observer, “but it is fair to say, we came up short during the second half. We seemed to slow up a bit and with the two sendings off, the game was gone from us.

“The lads gave their all, they did their best but what can you say, we’re all in the dumps but that’s life. We got here but we’re very disappointed. We went in two up and it looked good in fairness at halftime, but we never seemed to get going in the second half.”

The impact of former Antrim star Liam Watson on the game was enormous, 11 points from placed balls including a couple of monster scores from inside his own 65 metre line!

“We knew he was going to score everything, I’m not sure how many points he scored but everything he got, he scored it and that was a big advantage for them. Every time they got a free, he put it over the bar, from way out, he scored everything.”

Warwickshire did find it hard to breach Leitrim’s rearguard and Martin felt that if Leitrim had capitalised on a goal chance early in the second half, the result could have been different.

“We were near getting a goal at the start of the second half, if that could have gone in, things would have been different. Fair play to our backs, they stood up alright and we were only beaten by six in the end which is only two shots of a ball.”

The Leitrim manager took a phlegmatic view of the second half dismissals of David McGovern and Colm Moreton, commenting “Colm’s was a bit high, there was no malice in it, it was a bit high alright but that’s the way things go.”

And Martin paid tribute to the fabulous support enjoyed by the hurlers in Croke Park - “It was great to know that there is such a support, I never knew there was that much support in Leitrim. It is great to know it is there so it is up to us to organise and come back again and see what we can do next year.”

“With four teams, only two are going to be in the final, it makes it a bit tougher. Hopefully we will be back again. There are a few lads in their 30s but I’d say most of them will stay on, there is no reason to walk away.

“We have a good U17 team in Leitrim so we will be able to get a few off that down the line and we have to keep going anyway.”

Warwickshire manager Tony Joyce was delighted that his team had dealt with the favourites tag - “I thought there was a lot of pressure having played all year, maybe 12 games, losing one, a League Final. And then coming to Croke Park to lose two finals would have been heartbreaking but the pressure was on me. Probably a bit on the players as well.

“It wasn’t looking good at half-time but we kept them scoreless right up to near the end. So the players really delivered in the second-half. We had words at half-time and said ‘look, we have to get the win here’ because it’s an awful day when you lose a final.

“We had to bring Liam Watson out to midfield to get a hold of the game and get back in contention. Then we moved him back. They’re dogged, very dogged. It’s hard to beat them. So he turned up on the day and thank God he did. He got us over the line really.”