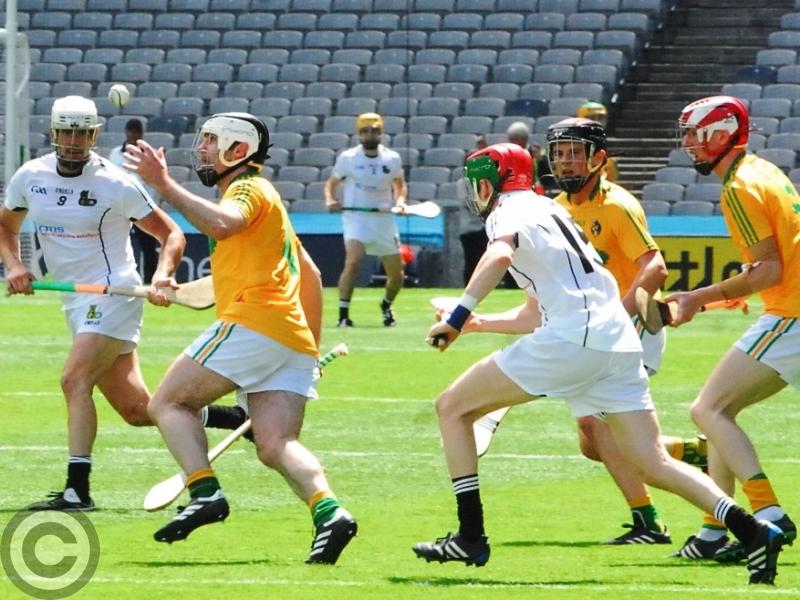 Eyes on the sliothar. Photo by Willie Donnellan

At the end, it came down to one elementary fact - Liam Watson was in Warwickshire white and not Leitrim gold and that was the deciding factor in the 2017 Lory Meagher Cup Final.

The first ever appearance of the Leitrim Senior Hurling team in Croke Park looked as if might have a fairytale ending as the Green & Gold produced some wonderful hurling in the first half to lead Warwickshire by two points.

The roar that sent the hurlers down the tunnel at halftime raised the roof and spoke of a Green & Gold support who felt that it might just be Leitrim's day thanks to a superlative display that tied up Warwickshire's attack and landed some wonderful points from play at the other end.

But the dream turned to nightmare in the second half as Warwickshire came out a very different team in the second half, a greater intensity around the middle of the field and in attack stalling Leitrim's progress at source while Liam Watson came centre-stage.

In the first 11 minutes of the second period, Watson drove what seemed like laser-guided missiles through the Leitrim posts, two from inside his own 65 metre line and out by the sideline as Leitrim indiscretions were punished heavily and often.

Leitrim fans were not happy with Donegal referee James Connors, feeling he called  some very soft frees but some of the fouls were needless concessions, clumsy rather than malicious tackles that allowed a marksman like Watson exact a price far heavier than the crime warranted.

The decisions to dismiss both Colm Moreton & David McGovern were harsh. Moreton was a little loose with his stick but there was no force, nor malice, in the incident while everyone thought McGovern got a second yellow for dissent but he was reportedly punished for dangerous play, something nobody could remember.

Those two dismissals were costly but perhaps more costly was the loss of Leitrim's scoring touch. In the first half, Cathal O'Donovan, Liam Moreton, James Glancy and Zak Moradi  all scored good efforts from play but that went missing in the second half as Leitrim's accuracy deserted them.

Some of that may have been the fact that the wind was now benefiting Watson's freetaking but Leitrim were struggling long before Moreton and McGovern were dismissed.

Warwickshire were the better team, they had the better touch in key battles around the field but their superiority was not reflected in their attack as the Leitrim defence performed a fantastic stonewall action.

Indeed, nearly all the damage done to Leitrim came in the middle of the park and on the Warwickshire 65 where fouls, soft or not, were punished with an accuracy not normally seen at this level and that, despite all of Warwickshire's dominance, was the difference between the teams.

The second half fade-out was as demoralising as the first half was inspirational but there were a few key factors behind Leitrim's  defeat.

Warwickshire never used their attack to any great extent, relying heavily on long range shooting and a tight defence to keep Leitrim at bay.

A heavy knock sustained by Liam Moreton robbed Leitrim of much needed power in the middle of the park and it has to be said that Leitrim's legs started to go, a situation made far worse by the loss of Colm Moreton and McGovern.

Yet for all that, there was still only six points in it at the final whistle and a Leitrim goal, against the run of play, would have made it very tight and very interesting.

Leitrim can hold their heads high, it was a disappointing ending but if they can keep this team together for next year's campaign and maybe bring in one or two new players, there is no reason why the Green & Gold cannot go one step further.

However, they must make sure the team and the management team stay together if they are to build on what has been an excellent campaign for Leitrim Hurling.

Main Man: Kevin McGrath, Vincent McDermott, Conor Byrne, Clement Cunniffe, James Glancy and David Carton were excellent for Leitrim but there was no doubting that Liam Watson had by far the biggest impact on this game, his free-taking the single biggest difference between the sides.

Talking Point: As disappointing as the second half was, this was still a breakthrough for Leitrim hurling. The support in Croke Park was superb and if Leitrim can keep this team together, there is no reason why Leitrim cannot make it back to Croke Park and win.

Turning Point: Halftime - Leitrim were flying up to the break and came out expecting to continue where they had left off. But Warwickshire were a different team in the second half and their intensity was raised several notches which told the tale in the end.

Ref Watch: Leitrim didn't blame referee James Connors for their loss but they felt, probably rightly, that the dismissals of Colm Moreton and David McGovern were very harsh. Hard to disagree as Warwickshire made the most of their frees.

Highlight: A fantastic first half saw Leitrim take the game to Warwickshire as they twice recovered from two point deficits to take a two point lead into the interval.

Lowlight: Leitrim's second half was disappointing as they were never able to get going in the face of Warwickshire's increased intensity.