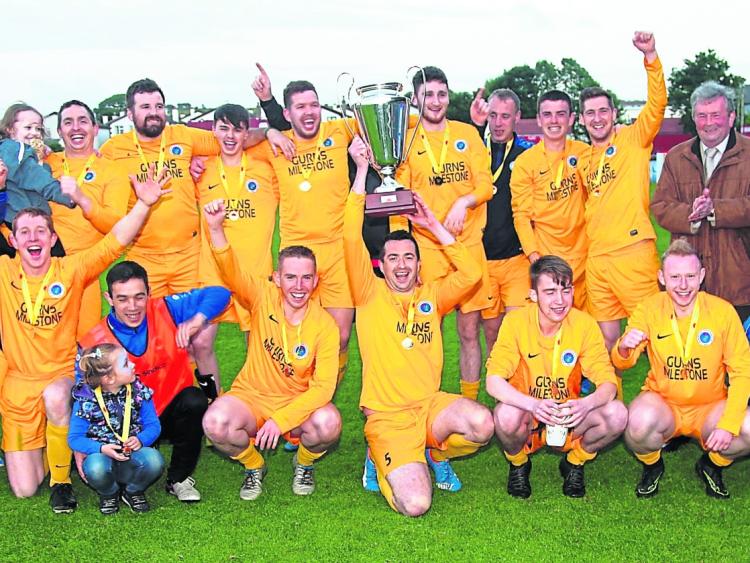 We are the champions! The Manor Rangers team and management celebrate their victory in the North West Hospice Cup last Saturday in The Showgrounds, Sligo

Ballisodare had taken the lead courtesy of captain Darragh Healy with just ten minutes gone. But Alan Gilligan's side rallied and turned the game on its head in a whirlwind sixty second period when Niall Walsh tapped into an empty on 33 minutes, just one minute before Patrick Woulfe put Manor into the lead.

The Leitrim men extended their lead three minutes into the second half as Walsh netted his second from the penalty spot after Woulfe was tripped in the Ballisodare box.

Despite controlling periods of the game, Manor were made to sweat late on when United found a way back into this final through sub Darren Somers eight minutes from time. 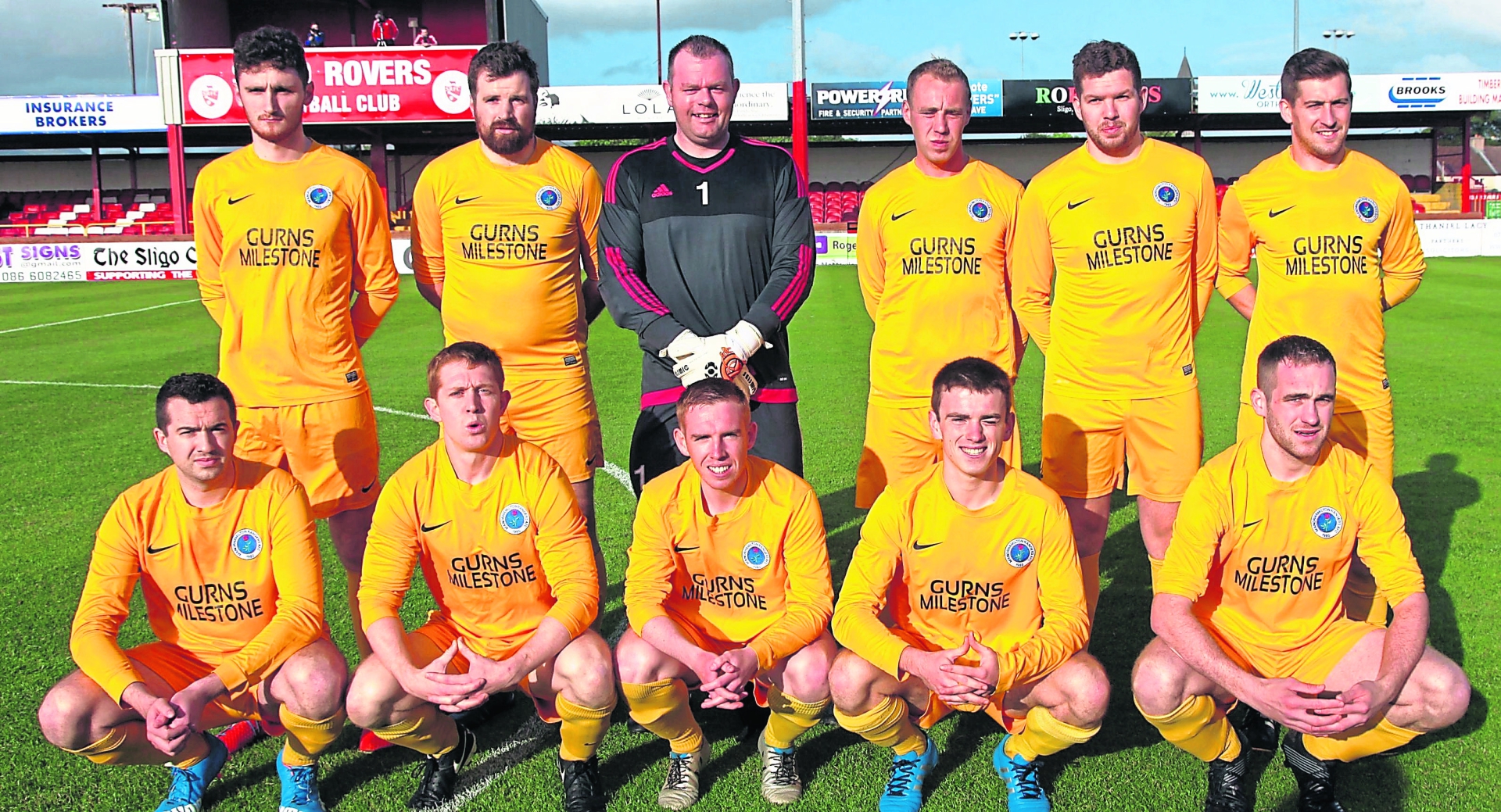 Their cause wasn't helped by the late dismissal of both Paul Clancy and Alan Hickey for second bookable offences.
Manor rode their luck late on when Ballisodare's Kevin O'Hara spurned two great chances to level the game.
But both relief and joy were the palpable emotions from the Manor bench at full-time as the north Leitrim men held on to become the competition's first ever winners.

After an even opening, it was the Sligo side who took the lead. Dermot McLoughlin picking out Healy at the edge of the six yard box from a corner. The skipper's initial effort was blocked down by a brave Manor defender but Rangers could do little about his second effort as Healy laced his finish into the roof of Paul Scanlon's net for the opener.

Manor gradually found their feet but had goalkeeper Scanlon to thank on the quarter hour as he rushed off his line to keep out Simon Gilmartin's low effort with a strong hand.

Cup finals can hinge on particular moments and United will look back at their next opportunity as a moment which could have seen the game swing well in their favour. 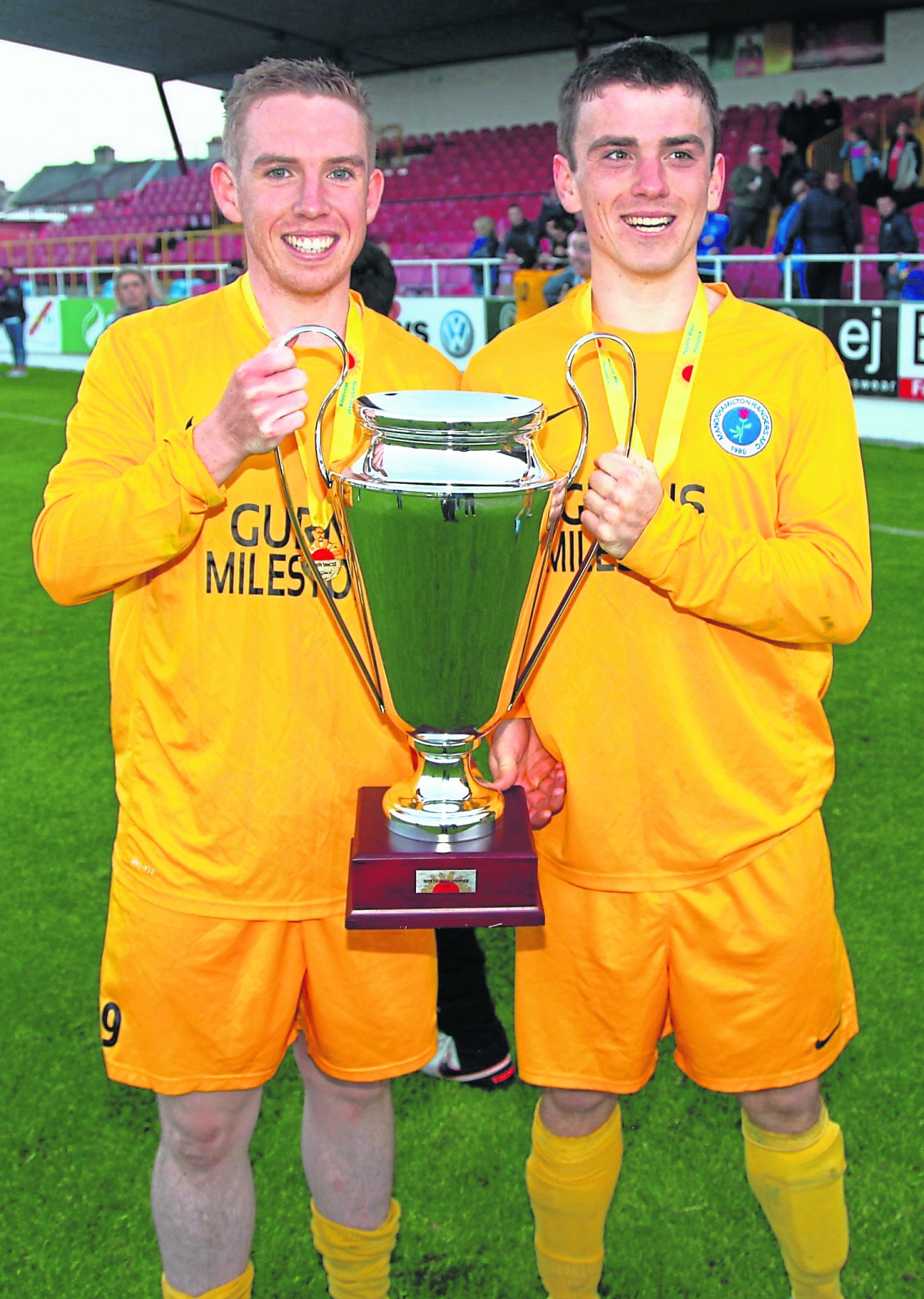 Keith Gilmartin jumped to head his namesake Simon's free-kick towards goal on 19. The ball took the slightest of nicks off Manor's Anthony McDonald before coming back off the post with Scanlon stranded.

This seemed to galvanise Rangers as they hit a purple patch. Seamus Ryder sprung the offside trap but was foiled by a robust but fair challenge from Ballisodare netminder Jack Mannion. Brian McDonald fired narrowly wide twice in quick succession in the 25th and 27th minute while the lively Woulfe could only watch on as he dragged his effort past Mannion's far post just short of the half hour. 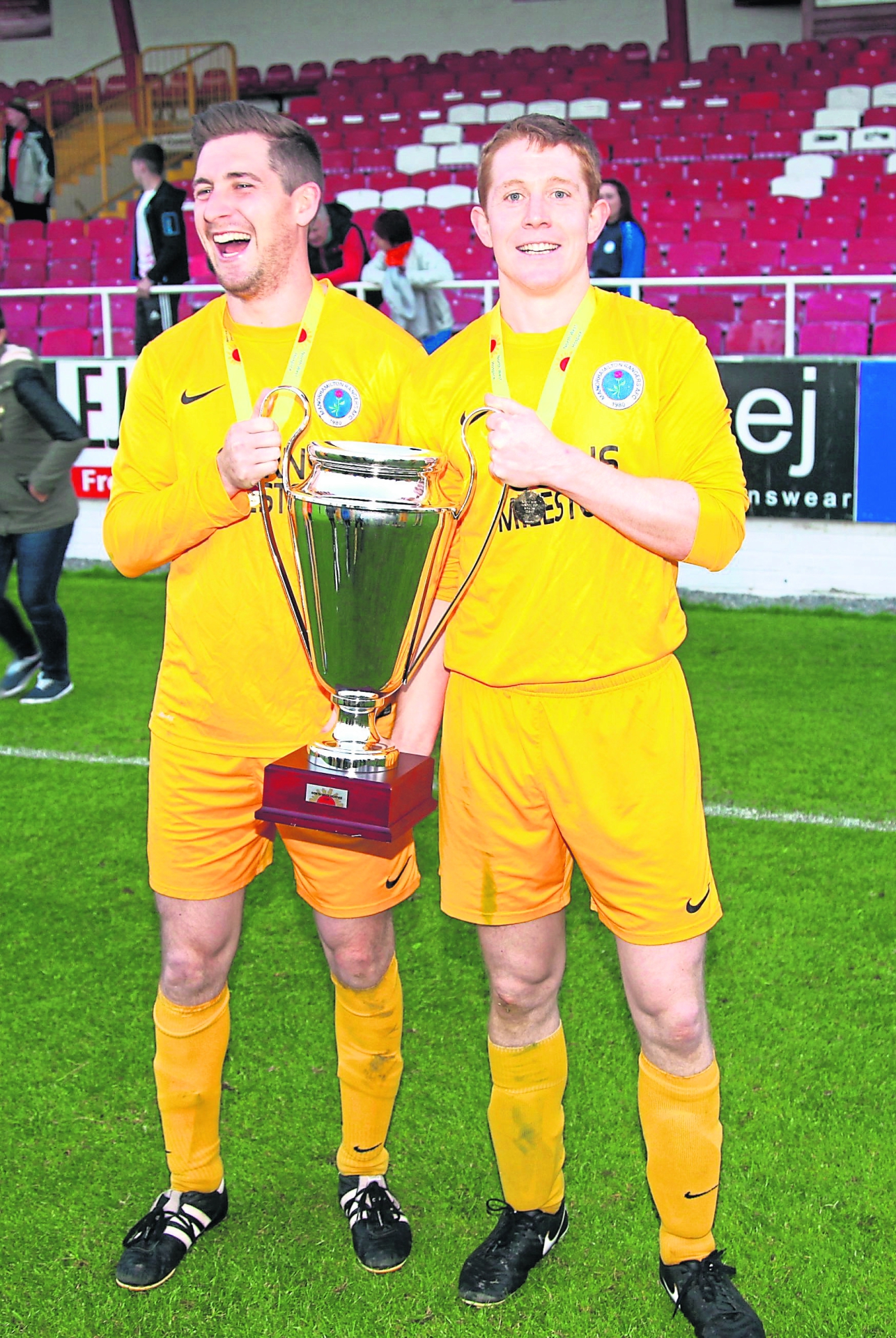 Mannion almost allowed Woulfe's shot to cross the line moments later after the former Sligo Rovers youth was picked out by Brian McDonald. While Woulfe glanced another effort across the United goal on 32.

The pressure finally told one minute later. Woulfe danced past the challenge of Ricky McMunn before he was taken to the ground by Mannion. Referee Tommy Oates played the advantage which allowed in in-coming Walsh in to tap into an empty net for a more than deserved equaliser.

Manor's pressing game was devastating at this juncture and the Leitrim side went ahead just 60 seconds later, Walsh threading a delicious ball into the path of Woulfe who showed experience and poise to tuck the ball past Mannion. 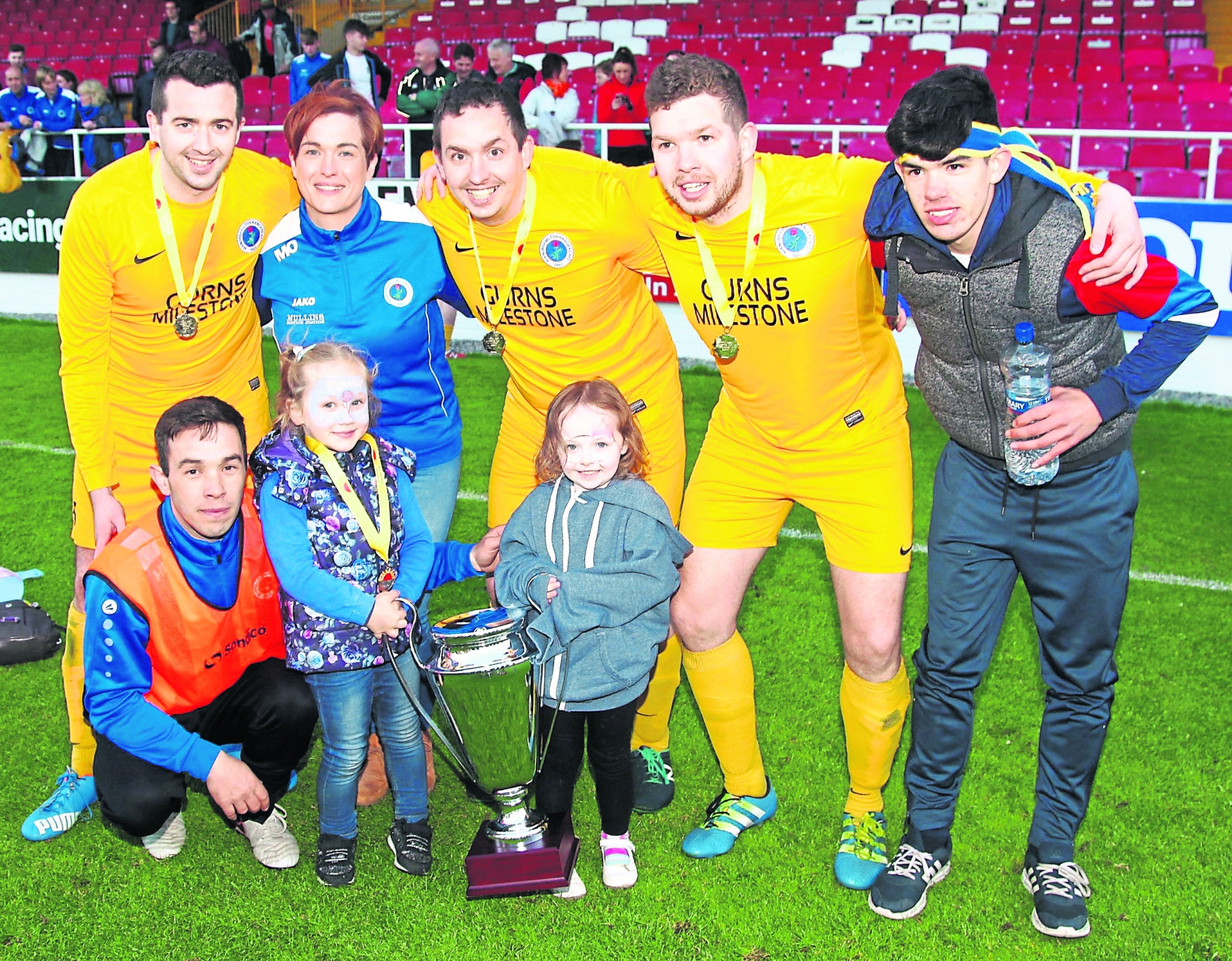 The pace and intensity of the game slowed somewhat for the majority of the second period, with Ballisodare having the odd half chance.

Scanlon had to be alert to hold on to Michael Casey's bending cross which seemed to catch the breeze on its way across the Manor goal. The keeper watching the ball all the way before catching it on his line. 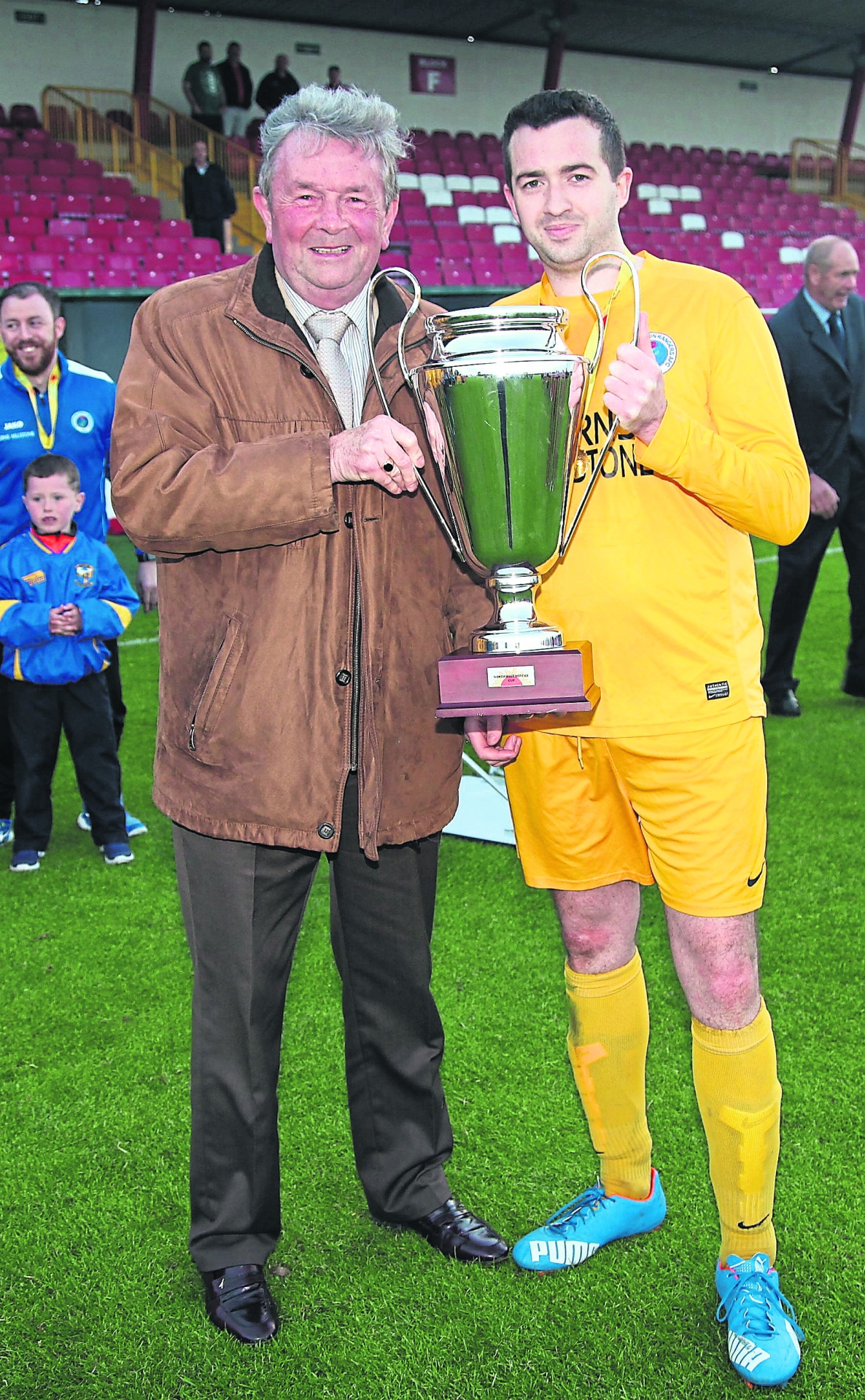 This just moments before United substitute Adam McGoldrick's 74th minute free-kick kissed the crossbar on its way over.
Manor were reduced to ten men with nine minutes to go when Clancy was sent to the stand following his second yellow for dissent.

Things went from bad to worse one minute later when Somers halved the deficit by making the most of the space afforded to him before finishing past Scanlon.

Ballisodare should have brought the game to extra-time but O'Hara, unmarked from an 85th minute corner, somehow miscued from close range with an open goal on offer. The ball skimming off the crossbar with Scanlon on the turf already committed.

The helter-skelter nature of the closing moments continued and O'Hara yet again fluffed his lines when he found himself one-on-one with Scanlon three minutes into added time, the Sligo man taking too much time to decide his next move as Scanlon narrowed the angle, forcing O'Hara to fire into the side netting.

There was still time for further drama. Hickey was shown his second yellow on 94 while Brian McDonald almost put the result beyond doubt 30 seconds later but was unlucky to see his drive come back off the post following a powerful run down the wing.