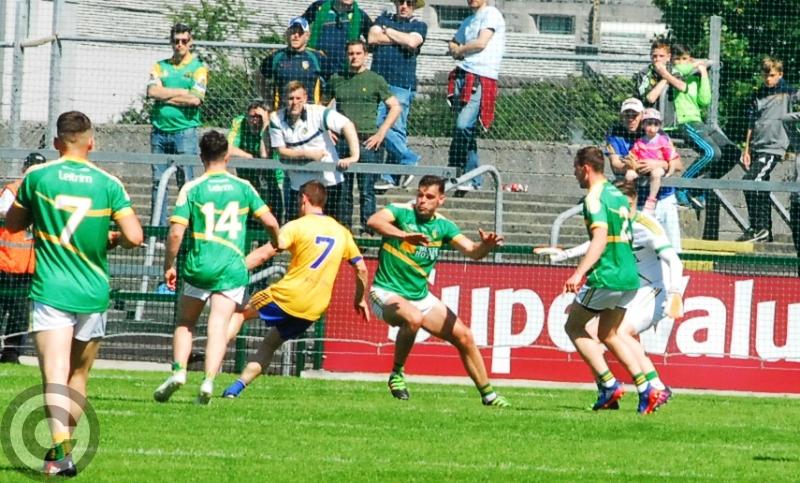 It might have been the last thing on their mind but Roscommon turned in a record breaking performance in Hyde Park on Sunday as they completely outclassed a shell-shocked Leitrim.

Roscommon’s 17 point victory was the largest victory the home side had ever enjoyed over the Green & Gold in Hyde Park and Kevin McStay’s team were well worth their winning margin as they dominated this contest.

Any hopes Leitrim had of shocking their neighbours were ruthlessly ended by a Roscommon side who looked like a team on a mission, cutting through the heart of the Leitrim defence time and time again as their highly-rated attack more than lived up to their billing.

Leitrim simply had no answer to the running from deep of Enda Smith, Conor Devaney, Sean Mullooly while Diarmuid Murtagh led the Leitrim full-back a merry dance and was at the heart of everything good Roscommon did in attack.

It was a devastating result for a young Leitrim team who were ruthlessly educated as to the gulf between a Division One team and a Division four side, the physicality, pace and intensity of the Roscommon men in a completely different class.

Darragh Rooney, against all the odds, embellished his reputation with a fearless display while Brendan Flynn in goal and Brendan Gallagher were outstanding for the Green & Gold but it will be hard for the Leitrim players to pick themselves up after such a devastating loss.

The Qualifiers now away and Leitrim will await to see if they are drawn against the winners of the first round ties that include Offaly v Cavan, Armagh v Fermanagh; London v Carlow and Limerick v Wexford.

The omens were not good as early as 15 seconds as Enda Smith gathered the ball from the throw-in and was only stopped as he bore down on goal by a Micheal McWeeney foul, Ciaran Murtagh putting over the resulting free.

Diarmuid Murtagh fired over from 45 yards, a score set up when Niall McInerney cut out a Leitrim attack and after a Niall Kilroy wide, Roscommon hit two points in the space of 60 seconds, Enda Smith capitalising after Oisin Madden failed to cut out a crossfield pass and from the kickout, Donal Smith scored a point that was far too easy.

Leitrim fans were already fearing the worst but they soon had a reason to cheer when Conor Gaffney’s run and a few swift passes led to Darragh Rooney blasting a fantastic strike from 20 yards high to the top left corner, Roscommon keeper Colm Lavin despite his acrobatic leap through the air.

Leitrim’s heads were lifted but they failed to build on the momentum, Keith Beirne seeing his long range free off the ground strike the woodwork and rebound clear while Damian Moran also shot wide.

Roscommon took note and responded with two points in the space of a minute, Fintan Cregg pointing after Enda Smith and Ciaran Murtagh had chances while Diarmuid Murtagh set up an unmarked Niall Kilroy for an easy point.

It wasn’t all plain sailing for Roscommon as Donie Smith was correctly black-carded for a needless drag down, Cian Connolly replacing the corner-forward before a crossfield free found Damian Moran and the Bornacoola man swept over a wonderful point.

But Leitrim’s dreams were quickly and rudely shattered - Roscommon cut through the centre and Enda Smith bore down on goal only for Brendan Flynn to make a wonderful save.

Cruelly for Flynn, the ball rebounded to Conor Devaney and the wing-back drove the ball to the net to leave Roscommon five clear after just five minutes.

Shane Moran was very lucky to avoid a black card after a blatant body-check to halt a Roscommon attack, Diarmuid Murtagh putting over the free from almost 65 yards.

Enda Smith saw a shot come off the post and Keith Beirne pointed after Brendan Gallagher did great to rob a Roscommon defender when there seemed little danger but the rest of the half belonged to Roscommon despite the fact that there would be just two more scores.

Niall Kilroy saw a shot cleared by Brendan Flynn and Conor Devaney had a close range shot saved before Sean Mullooly surged upfield to set up Diarmuid Murtagh for a point that was all too easy.

And the contest was virtually ended three minutes before halftime when Diarmuid Murtagh gathered a high ball and off-loaded to a charging Devaney who blasted to the net for a killer goal.

The half took an eternity to end as, after six minutes of injury time were announced, there were hold-ups for a few heavy knocks and Leitrim’s cause suffered another double blow when Dean McGovern was forced out of the action after a heavy fall and Damian Moran was black carded for a late hit. 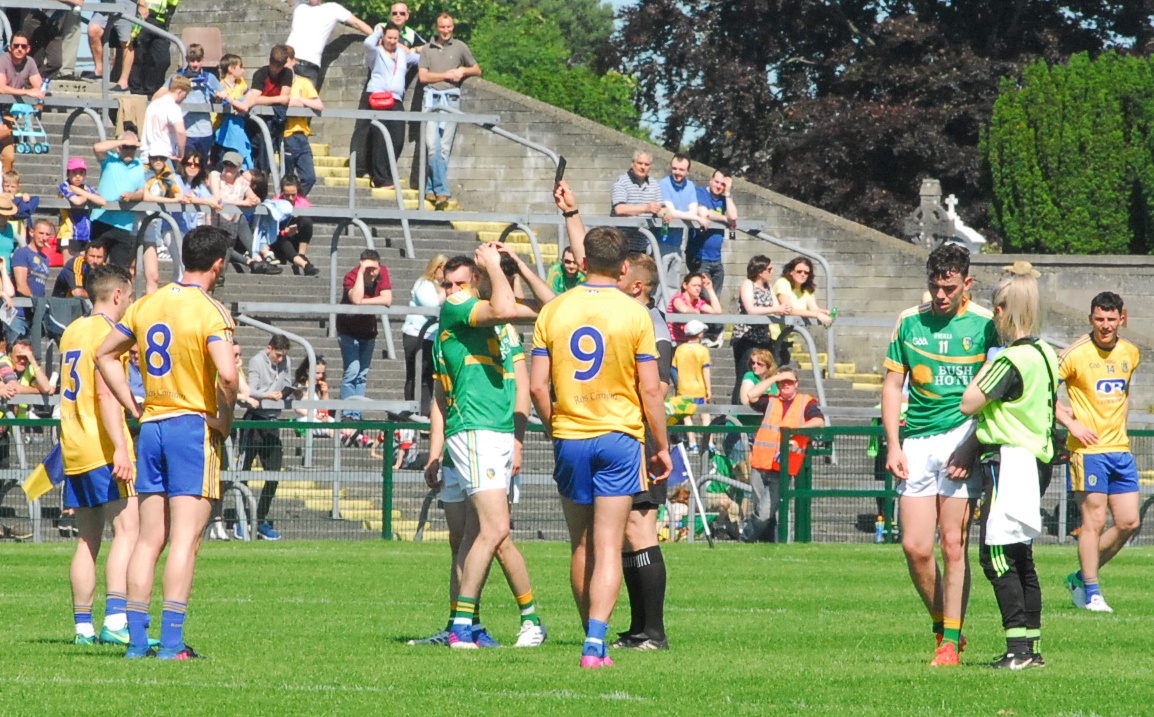 Leitrim's Damien Moran is black-carded by referee Anthony Nolan at the end of the first half. Photo by Willie Donnellan

That left Roscommon 2-9 to 1-2 in front at the break and they wasted no time in stamping their class on the second half with Enda Smith repeating his first half feat of driving through from the throw-in before pointing after just 12 seconds.

Ciaran Murtagh from two frees, Enda Smith after a Devaney crossfield pass, sub Cian Connolly all added points in the first seven minutes before Roscommon won a penalty when Brian Stack was taken down as he broke through the cover by a combination of Micheal McWeeney and Oisin Madden.

McWeeney, to his fury, was black carded but Leitrim had a let-off when Ciaran Murtagh’s spot-kick flew high over the bar.

With Roscommon throwing on three subs and Leitrim two, one for the black card, any intensity left in the contest disappeared with Keith Beirne setting up Brendan Gallagher for a fine point on 14 minutes.

And that was the way it continued for the final ten minutes - Darragh Rooney scored a lovely point after a great run down the wing, Diarmuid Murtagh quickly replying; Ronan Kennedy scored a great point after Shane Moran had a shot on goal blocked by Niall McInerney, sub Colin Compton responding.

Roscommon were in complete control and despite a long range Keith Beirne score, the full-forward hit two more lovely points to seal a 17 point win for the home team. 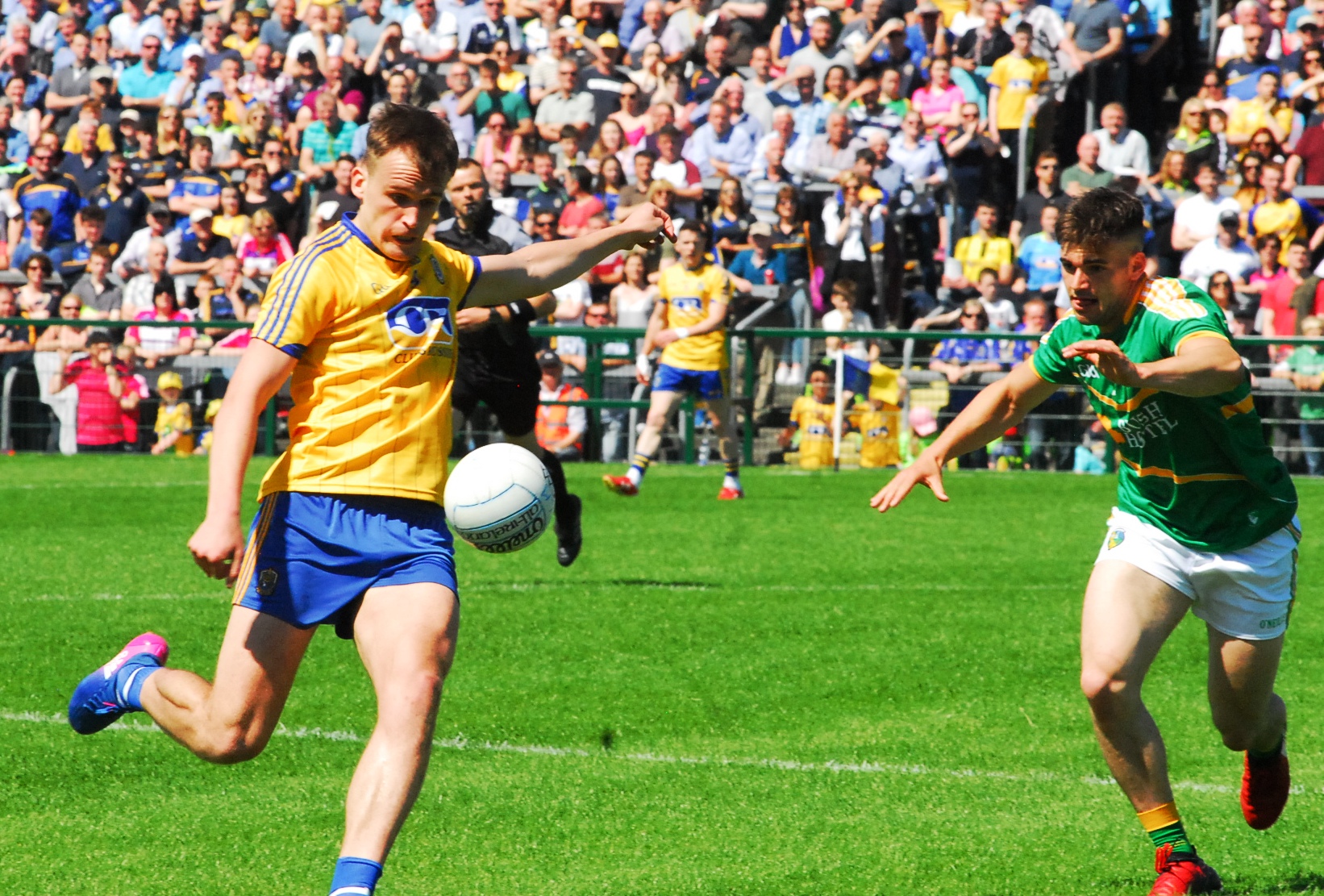 Enda Smith gets his shot away despite Oisin Madden's attempted efforts to block him. Photo by Willie Donnellan