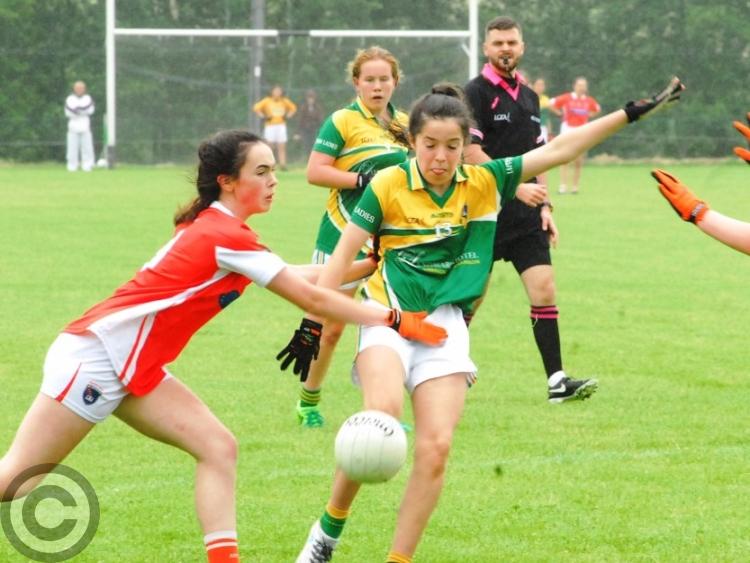 Leitrim made the journey to Drumlane, Co. Cavan on Saturday last in the hope of clinching the All-Ireland U-14 B title and after a terrific performance, they deservedly did just that with scenes of great celebration indicating just what it meant to all involved.

Team manager Jerome Quinn spoke last week about his belief that Leitrim were good enough to emerge victorious and it was clear from the throw-in that belief was shared by his players.

The playing conditions may have been difficult as rain fell for portions of the game making handling less than straightforward but that was merely another obstacle for the Leitrim players to overcome.

Muireann Devaney attacked the Armagh defence straight from the opening throw-in and when a foul was awarded, the Glencar/Manorhamilton duly slotted the placed ball over the bar.

Leitrim's energetic start saw them apply plenty of pressure on the Armagh rearguard and they were rewarded in the fifth minute when Sarah Reynolds struck for the game's opening goal. Her shot appeared as though it would be dealt with by the Armagh goalkeeper but Chloe Kelly was unable to keep a firm grip on the ball and it squirmed free and into the goal.

Armagh replied with their opening score, a free converted by Casey Mullen but Leitrim were still very much in the ascendency and soon extended their lead.

An Olwyn Moore pointed free in the sixth minute was followed a minute later by Leitrim's second goal of the game.

Muireann Devaney and Shaylyn Ward combined brilliantly and Ward applied a composed and precise finish as she shot low and hard across the face of the Armagh goal with the ball nestling in the corner of the goal.

To their credit, Armagh wasted little time in responding and barely a minute later had registered their first goal of the final. Niamh Murphy's pass found Orlaith Mallon who rifled a shot to the top corner of the net and that was immediately followed by a pointed free from the boot of Casey Mullen to leave just a goal between the teams.

However, Leitrim soon regained the upperhand, thanks to some quick thinking from Muireann Devaney. After Armagh goalkeeper Chloe Kelly had been penalised, 20 metres from her goal, Devaney immediately spotted the goal was unguarded and executed a perfect shot as she  lobbed the ball to the Armagh goal and she quickly followed that up with a pointed free.

After a frenetic opening quarter hour, the game settled down somewhat, both defences taking control for the following nine minutes as there was no addition to the scoreline. The Leitrim defence was particularly strong, forcing the Armagh players into shooting from positions they didn't seem particularly comfortable.

With six minutes of the half remaining, Leitrim regained the initiative with their fourth goal of the game. Shaylyn Ward's delivery over the Armagh defence allowed Muireann Devaney to race onto the ball and then applied a low finish to the Armagh goal.

However, Armagh were awarded a penalty four minutes later following a foul on Aine Rice and Hannah Duffy dispatched her penalty perfectly to the corner of the Leitrim goal, out of the reach of Niamh McDonagh who had dived the right way.

Muireann Devaney replied with an excellent individual point but Armagh were to have the final say as Hollie Morgan blasted a shot to the roof of the Leitrim net to leave the score 4-4 to 3-2 at half-time.

Given the strong finish Armagh made to the opening half it was difficult to predict how the game would unfold  but Leitrim started the second half superbly to regain full control.

Points from Anna Hazlett and Muireann Devaney (free) were followed by two goals in quick succession as Devaney and Shaylyn Ward both found the Armagh net.

The Armagh players now looked resigned to defeat as Leitrim bossed matters throughout the second half. Siomha Quinn was excellent in midfield, Anna Hazlett was instrumental at full-forward and when needed in midfield while Riona McKeon, Olwyn Moore and the rest of the Leitrim forwards never allowed the Armagh defenders an opportunity to clear the ball without being under severe pressure.

Four Muireann Devaney points were matched by only a solitary point from Sarah Devlin as Leitrim flexed their muscle and pulled away further.

With three minutes remaining, Aoife Mallon scored a consolation goal for the Orchard County  but Leitrim were intent on having the last say and finished in style. 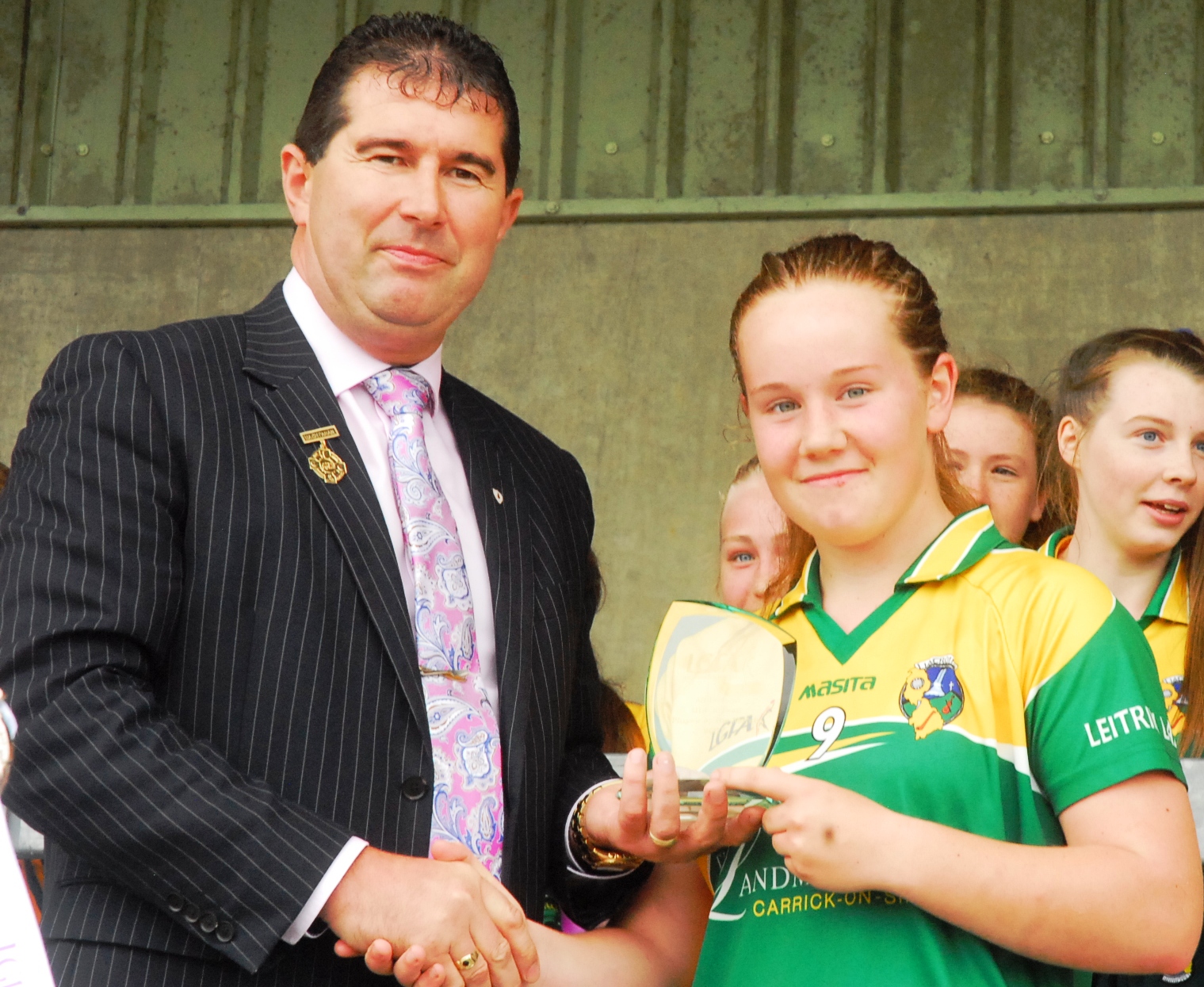 Muireann Devaney is presented with the Player of the Match award. Photo by Willie Donnellan

Main Woman: There were heroes all over the pitch for Leitrim but the award deservedly went to Muireann Devaney who finished with a personal tally of 4-9.

Talking Point: There was plenty of nervousness among both sets of supporters during the interval as the game was delicately poised but there was no sign of nerves from the Leitrim players as they started the second half superbly and never let their opponents back in contention.

Turning Point: Leitrim's unanswered 2-3 inside the opening 10 minutes of the second half put them on course for victory.

Ref Watch: The game was refereed sensibly by Conor Dourneen who made good use of the advantage rule.

Highlight: Leitrim's second goal, scored in the ninth minute was worth the journey to Drumlane. With the Armagh goalkeeper out of position after committing a foul, Muireann Devaney wasted no time and took a quick free which caught everybody off guard. Her shot was executed  perfectly as it sailed over the  goalkeeper and into the net.

Lowlight: It may have been the first day of July but the weather in Cavan on Saturday did not have a summer feel to it. However, Leitrim made light work of the difficult conditions as they produced a clinical display. 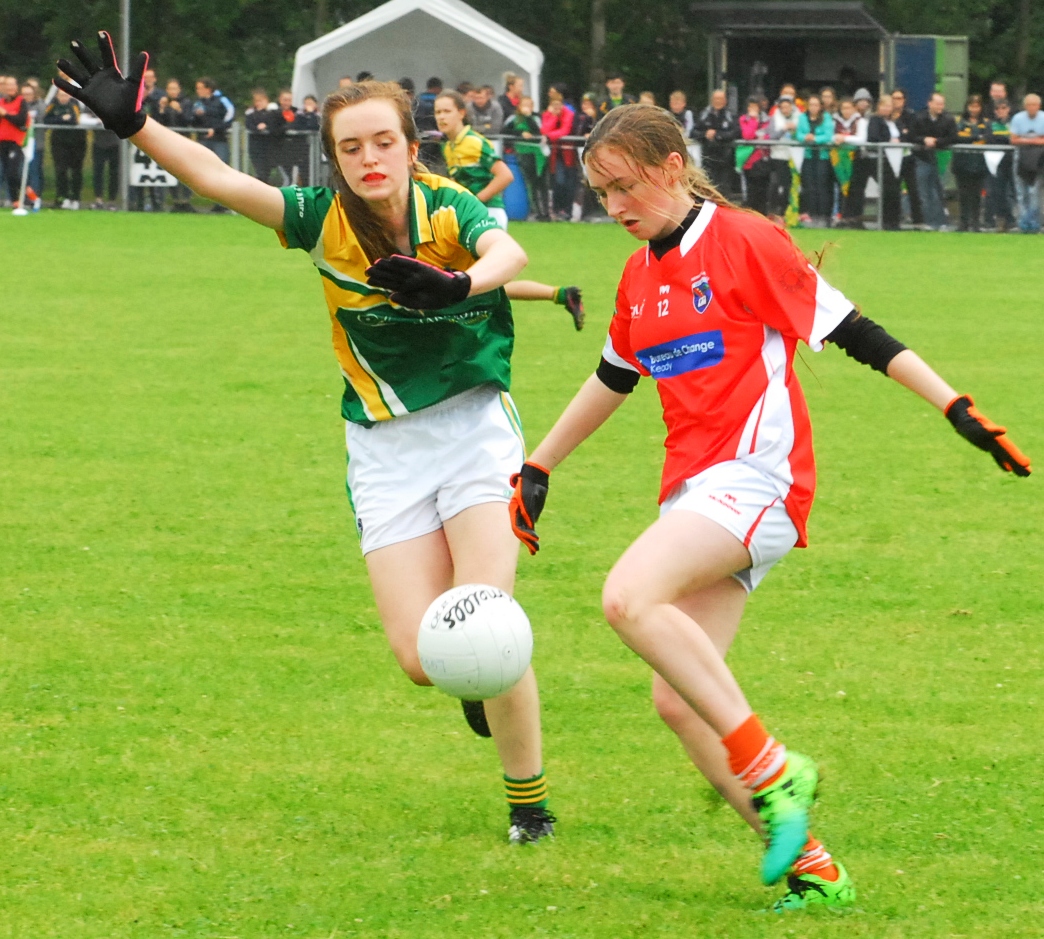 The Leitrim team who defeated Armagh to win the All-Ireland U14 B Championship title. Photo by Willie Donnellan