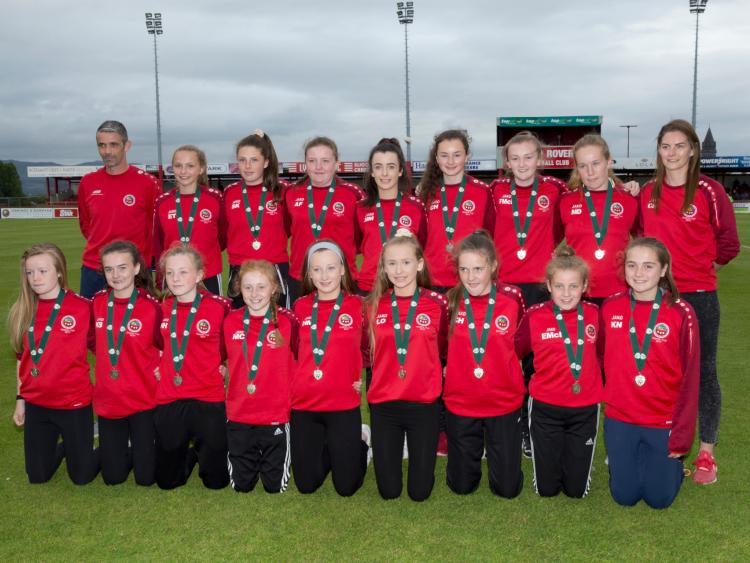 Muireann Devaney was one of the star performer for the Sligo/Leitrim team that were narrowly beaten by Galway in the recent U14 Gaynor Cup.

Held at the University of Limerick, the Gaynor Cup is an annual tournament organised by the FAI which has grown in stature over the last few years and showcased the very best in talent in the underage soccer scene.

Sligo/Leitrim began the tournament in style with a 4-0 win over last year’s beaten finalists Cork. Goals from Cathy Harrison, Laura Oates, Sarah Kiernan and Helen Monaghan ensured the perfect start to the competition.

The Midlands and District League were the next opposition and once again the scoring was opened by Cathy Harrison but they were unable to build on that lead and the midlanders equalised to ensure a share of the spoils.

Sligo/Leitrim had done enough to advance to the quarter-finals where they faced Kilkenny and goals from Ciara Henry and Harrison were enough to secure a place in the semi-finals.

Inishowen provided the opposition in the last four, with a place in the final the prize for the winner. Sligo/Leitrim’s Ciara Henry was on target once more as she opened the scoring and that was followed by a moment of magic from Muireann Devaney as her long range shot found the top corner of the Innishowen goal.

To prove it was no fluke, Muireann repeated the trick 10 minutes later as she scored an almost identical goal to confirm Sligo/Leitrim’s place in the final.

What a way to secure a final spot! Muireann Devaney from with a fantastic double to get to the U14 Cup Final!

Galway provided the opposition in the final but despite their best efforts it proved to be a step too far for Sligo/Leitrim who were beaten 1-0 in the decider.