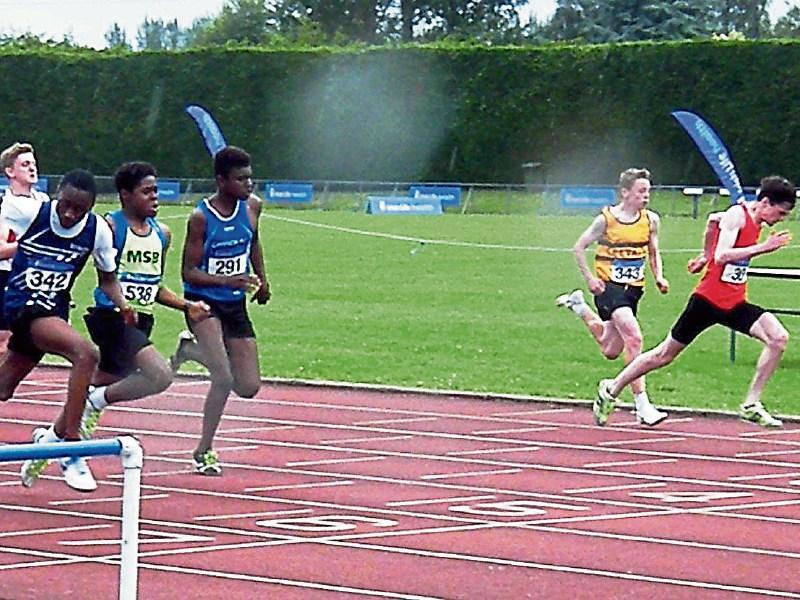 Carrick AC's Toyosi Fagbo (third from left) was a matter of inches from the silver medal in the U14 80m Final at the Irish Life Health Athletics Ireland National Juvenile Track & Field Championships.

North Leitrim’s Darragh Mitchell was Leitrim’s only medal winner at last weekend’s Athletics Ireland Juvenile Championships but there were near misses for Shannon O’Hagan, Toyosi Fagbo and Eoin Gaffey.

Darragh won a bronze medal in the U15 Walk from the Irish Life Health sponsored championships while clubmate Shannon finished fourth in the U16 Javelin. There were fifth places for Carrick AC’s Toyosi Fagbo in the U14 80m and Mohill & District AC’s Eoin Gaffey in the U17 walk.

Over in Brussels, Eanna Madden fell just short in his attempt to qualify for the World Student Games when he ran 21.21 and 21.25 for 200m at the Brussels Grand Prix in the King Baudouin Stadium, outside the 21.00 standard.

Gerard O’Donnell was also in action, recording a time of 14.39 seconds for the 110m hurdles into a 1.7 m/s headwind and both athletes will set their sights on medalling at the Irish Senior championships in the coming weeks.

In Tullamore, Darragh Mitchell was the county’s only medalist as he followed up his bronze from the indoors with a third place finish behind Mullingar’s Matthew Lennon, the north Leitrim walker returning a time of 11.16.92 behind Hurling’s 10.50.57.

In the U16 Javelin, Shannon O’Hagan’s throw of 28.12m was enough for fourth place, less than two metres away from the bronze medal. Mohill & District AC’s Eoin Gaffey finished fifth in a high quality U17 Boys race in a time of 16.25.18.

Carrick AC’s Toyosi Fagbo took an excellent 5th place in the U14 80m Final in a time of 10.21 seconds. Toyosi was less than two tenths of a second off the silver medal in a very competitive race.

Aaron Bradshaw also had a fifth place finish in the U17 Shot where his best of 7.63m saw him finish one ahead of clubmate Oisin Carolan who threw 6.49m. The pair were also in action in the Javelin where Aaron finished 8th with 28.18m while Oisin threw 13.71m for 10th.

North Leitrim also saw Erica Greene finished seventh in the U14 Javelin with a throw of 25.28m while Helen Verachtert was 11th in 20.83m. Finn Verachtert threw 24.15 to finish 13th in his Javelin.

Carrick AC’s Sean Brennan was another top eight finisher with eighth place in the U15 Javelin with 25.67m, just ahead of clubmate Daniel Bosquette with 22.93m.

There was a bit of pain too as Shauna McCabe from Carrick AC suffered a heavy fall in the U18 100m but still got up to finish the race.