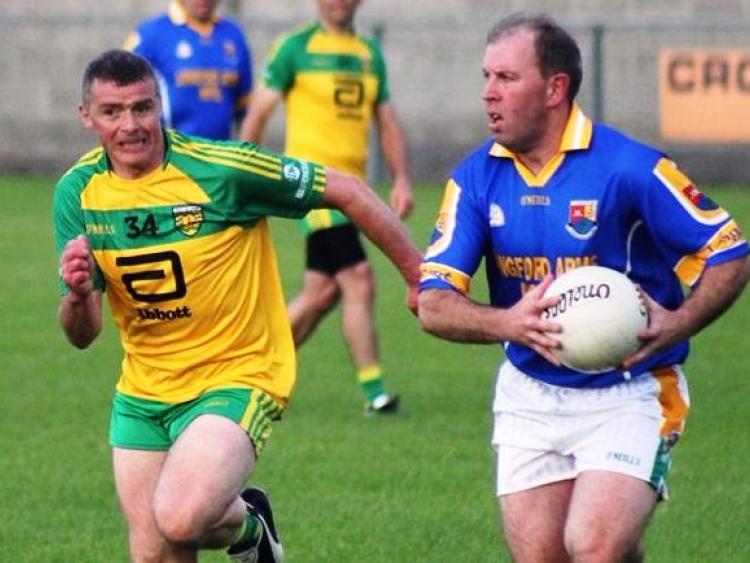 Dermot McMorrow pictured in action for the Leitrim/Longford Masters against Donegal.

Unfortunately despite a valiant effort Leitrim Longford Masters went down to a very strong Donegal outfit who have their eyes set firmly on a big prize in 2017.

Being a brand new outfit, it was expected that it might take Leitrim-Longford a few minutes to settle down and although the defence was more than holding it's own against a very potent and fluid attack our own forwards were just finding that final ball or shot elusive.

The first half was full of end to end, good honest attacking football. Leitrim Longford were gaining success in the middle of the park, in particular, winning more than their fair share of goalkeeper Frank Noonan's superb kickouts.

Half time saw us behind by 0-6 to 0-3 but overall there was nothing it in terms of possession. Unfortunately Donegal had a good second half, helped at a crucial stage by a goal that was almost denied but as two Donegal men collided on the edge of the square.

It seemed the chance of netting was passing them by, but the ball was spilled and it ran kindly for Brian McLaughlin who smashed it to the roof of the net after reacting quicker than those around him.

Leitrim Longford tried in vain to rally and never allowed their heads to drop. Donegal did tag on a few consecutive points to widen the margin of victory. The final score was Leitrim Longford Masters 0-9 Donegal Masters 1-15.

It was a little bit harsh to lose by nine points as although Donegal were the better side on the night, there were many positives to draw on and Leitrim Longford competed very well all over the field.

With a large contingent missing due to club commitments, we are extremely optimistic for our remaining games and wish to thank all those who played as nothing less than 100% effort was given right to the bitter end.

Next up are Monaghan with the date and venue for the game under discussion as we go to press. Already there is a belief that something good is going to come out from this dressing room and we fully intend to put things right straight away.