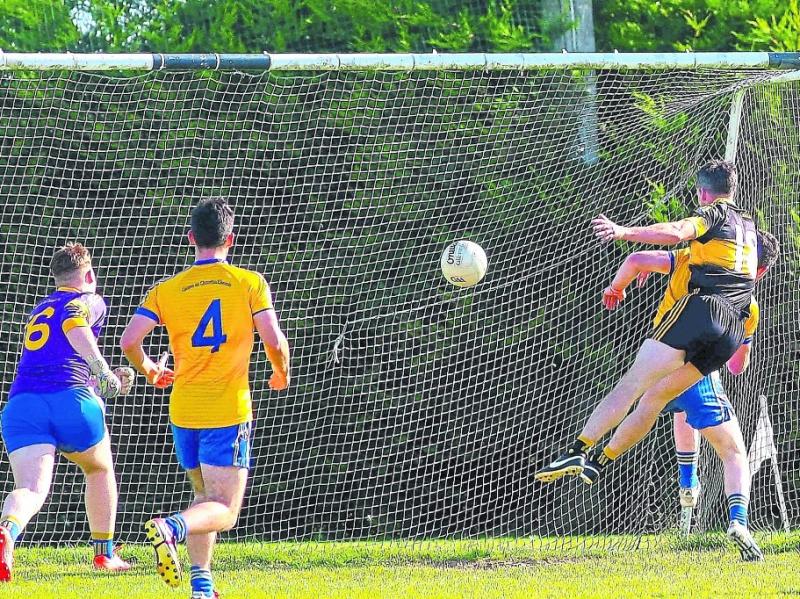 An airborne Philip Howard manages to fist the ball to the Glencar/Manorhamilton net last Saturday. Photo by Willie Donnellan

Bornacoola caused an upset at Shane McGettigan Park, Drumshanbo last Saturday when they defeated previously unbeaten Glencar Manor in round 3 of the Connacht Gold Senior Championship.

Pointless following their first two games, it looked liked that trend would continue on Saturday but the Bors had other ideas. Playing with the advantage of a breeze, they put in a tremendous first half performance and went in at the break leading by 11 points.

Whilst they had excellent performers all over the field, one player has to get a mention and that is Damien Moran, who notched 1-7 in the opening half. Playing at full-forward, he caused havoc every time the ball was played in and gave the losers defence a torrid time, but he will be first to admit that he got quality ball in from the likes of Gary McCloskey and Michael Duignan in the midfield area.

It was Glencar Manor who had the early chances, though, and a good move involving Evan Sweeney, Ronan Flynn and James Rooney ended with Rooney flicking the ball just wide of the post. Aaron Hickey from a good position failed to convert a free a minute later but another free, this time from the boot of Evan Sweeney was successful.

The lead didn’t last long, three points from Moran in as many minutes, two of them from frees, put the winners into a two point lead.

The losers responded with an Adrian Croal point but then came the first goal of the match. A high ball from midfield was brilliantly caught by Moran on the edge of the square and he turned and fired the ball to the net.

Again the losers responded, this time a good move involving Darren Sweeney, Cian McManus and James Rooney ended with Croal firing over his second point of the game. But in a blistering five minute spell, the winners hit 1-4 without reply.

Three more points from Moran, two from play, was followed by a goal from Philip Howard. He found himself behind the Manor defence and even though his initial effort was half blocked by goalie Christopher Jenkins, Howard was quickest to react and flick the ball to the net.

Moran added another point from a free to give his side a ten point lead before Aaron Hickey stemmed the tide with an excellent free from close to the sideline. But the winners ended the half the better, hitting a couple of points from play, both coming from Alan Croghan.

Glencar Manor had all the early chances after the restart; three wides in a row didn’t help their cause but two points in as many minutes from Evan Sweeney and Killian McGrisken got them off the mark. They continued to dominate proceedings but were finding scores hard to come by.

Two Bornacoola players went into referee Jimmy Stenson’s notebook, Michael Duignan and Damien Moran within a few minutes of each other and when Duignan received a second yellow shortly afterwards, things didn’t look as rosy for the Bors.

A third player, Jason Conroy, also received a yellow and with the losers dominating proceedings, it was certainly a worrying time for the winners. Moran was now playing much deeper leaving their main marksman a much lesser threat in the second half.

The following 12 minutes didn’t get any better for them, with Glencar Manor hitting over six unanswered points. Three of the them came from full forward Evan Sweeney, two from Aaron Hickey and one from Adrian Croal and suddenly with only five minutes of normal time remaining, just three points separated the sides.

But disaster followed for Glencar/Manor with Daniel Maguire receiving a red card and even though the winners also lost a player, Shane Conroy, it was to a black card. The next score was going to be vital, and it was the Bors who got it through Liam Mulligan.

It was their first score of the second half and it came in the first minute of injury time but what a time to get it.

But still Manor kept battling with Evan Sweeney kicking a fine point to leave just a goal between the sides again. The insurance point came in the fifth minute of injury time through Philip Howard to bring the Bors back into contention for a quarter final spot.

It was their first half display which helped them to victory, in fact they scored more in the first half than in either of their previous two matches and showed great fighting spirits, none more than former county star Gary McCloskey, who went down three times through injury in the final quarter, only to come back each time and help his team, in no small way, to victory.

Glencar Manor will be disappointed with the result, they will look back at 12 wides, six in each half, as against three for the winners but they did put in a tremendous effort in the second half to be still in contention in injury time.