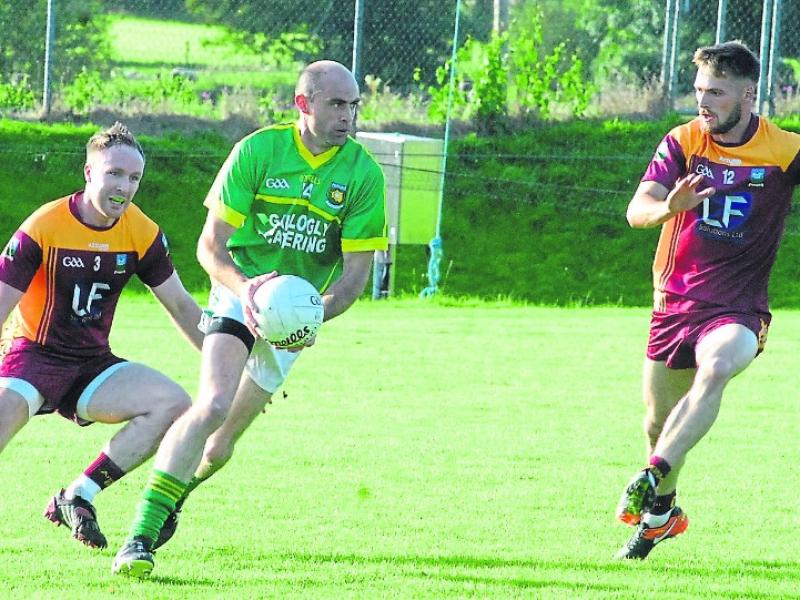 Drumreilly, who had been tipped by many to be among those battling to avoid relegation are now on course for a place in the quarter-final of the Connacht Gold Senior Championship after a hard fought but thoroughly deserved win over Annaduff in Ballinamore on Saturday.

The loss of John McKeon to injury and Peter Prior to a black card in the opening half would have been a blow too much for other teams to contend with but Drumreilly showed great resolve and no little skill to record a narrow but merited victory.

With a win and a defeat for both sides in their opening two games and with very tough tests still to come in the group stages of the competition, the importance of a win last Saturday would not have been lost on either side.

Drumreilly were the quicker to settle to the task at hand with Conor Gaffney's first minute point from play followed shortly afterwards by a pointed free.

It took Annaduff a few minute to get up to the pace of the game but when they did they hit back with two points from Sean McNabola.

The first sight of goal of the game fell to Annaduff in the eight minute when a free was pumped dangerously towards the Drumreilly goal. Frank McNabola saw his initial shot hit the post before a follow-up shot was somehow blocked on the line. Gavin O'Brien arguably had the best chance of all but when the ball fell to him he drilled his shot wide when a goal seemed inevitable.

Alan Glancy gave Annaduff the lead for the first with a 14th minute point after good play Kenneth Cox but Drumreilly hit back immediately with two points in the space of a minute courtesy of Ronan McCartin and Nigel Maguire.

A feature of the contest was how often the momentum changed and with 13 minutes of the half remaining Drumreilly were dealt a real blow when Annaduff struck for the game's opening goal. Alan Glancy released Eoin Gill who embarked on an excellent run before delivering a perfect pass to Gavin O'Brien who made no mistake with his finish as he unleashed an unstoppable shot to the top corner of the Drumreilly goal.

Moments after the concession of that goal, Drumreilly were dealt an even bigger blow when John McKeon was forced off with an injury.

However, in slightly unusual circumstances, the next score of the game was a Drumreilly goal which arrived in the 23rd minute. Conor Gaffney and James Holohan combined to find Raymond Fee who appeared to be fouled before carrying the ball over the line. No flags were raised to indicate what the verdict was but referee Ray McBrien was well placed and after consulting with his umpires a goal was awarded.

If there was a touch of good fortune about that score, Drumreilly could consider themselves unlucky not to score a second goal four minutes later. Peter Prior's dangerous delivery was watched like a hawk by a James Holohan and as the ball came down from the sky and over his shoulder he arched his back and swung his boot. The connection Holohan made with the ball appeared to be perfect but he had to settle for a point.

In injury time Drumreilly were awarded a penalty which was dispatched with the utmost composure by Damon Maguire.

Declan Maxwell scored his first point of the game in injury time to give Drumreilly a commanding 2-6 to 1-3 lead at the break.

Maxwell began the second half as he ended the first with two excellent points coming either side of Annaduff points from Ray Cox (free) and an excellent Dillon Keane score.

Midway through the second half Drumreilly took a big step towards securing victory when James Holohan took control of a fine pass from Nigel Maguire before emphatically dispatching his shot past Jim McCormack.

To their credit there was no sign of Annaduff throwing in the towel and they hit back quickly with points from Eoin Gill and Ray Cox (free) before Alan Glancy dispatched a 54th minute penalty, awarded for a footblock, past Michael McGirl.

Drumreilly, leading by four with time running out, showed great composure in the closing stages with Declan Maxwell very much to the fore. He vision created an opportunity for Francis Holohan which was duly slotted over the bar before Maxwell scored the point of the afternoon to give his team some breathing room.

Annaduff refused to accept defeat and replied with two pointed frees from Ray Cox but Drumreilly were not to be denied.

Main Man: Sean McNabola, Gavin O'Brien and Dillon Keane stood out for Annaduff while James Holohan, Dylan Mimna, Raymond Fee and Conor Gaffney all had fine games for Drumreilly. The influence of Declan Maxwell was key for Drumreilly, the full-forward playing a leaders role in the second half and scoring some brilliant points.

Talking Point: Drumreilly have bounced back from an opening day defeat at the hands of St Mary's and recorded their second win of the competition last weekend. With two games to go, qualification for the last eight is in their own hands.

Turning Point: A bizarre goal seven minutes from half time brought Drumreilly back into contention. Raymond Fee appeared to be fouled as he tried to get a shot away and then seemed to fall over the line with the ball in his grasp. A penalty seemed inevitable but the referee was much better placed to view the incident, a goal was awarded and Drumreilly never looked back.

Ref Watch: The game was sensibly refereed throughout by Ray McBrien who was up with play throughout.

Highlight: Declan Maxwell's point in the final minute was stunning. He appeared to be happy to maintain possession on the sideline as he slowly made his way towards the endline when he suddenly decided to unleash an audacious shot that flew over the bar.

Lowlight: An injury to Annaduff's Sean McNabola 21 minutes into the game required lengthy treatment and deprived Annaduff of an exciting and dangerous attacking force.