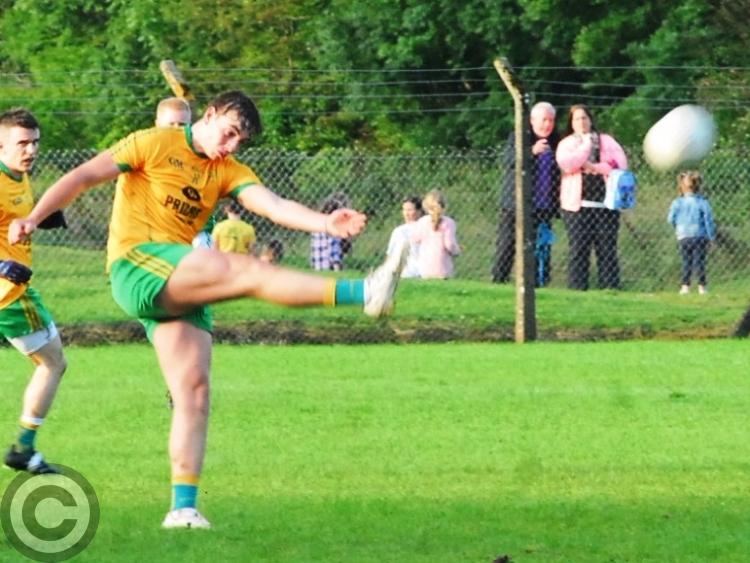 If anyone doubted Ballinamore Sean O'Heslin's are serious contenders for the Fenagh Cup, nobody is doubting them now.

Last year's Connacht Intermediate finalists turned in a superb display to hand Mohill their first defeat of the round robin stages in a game in Cloone that left spectators wanting more.

Ballinamore had Niall McGovern stepping firmly out of the shadow of absent brother Dean with a superlative display, scoring 1-6 from play and delivering a performance upfront that had Mohill's defence at sixes and sevens.

Mohill, without Shane Quinn, Keith Beirne & Ciaran Kennedy, went six points down and looked dead and buried under McGovern's early onslaught but showed their quality as they fought back to close the gap to two points before the halftime break.

But Mohill did have Ronan Kennedy on the field and the County man delivered an epic performance, scoring ten points, four from frees, and some a succession of absolutely superb points that hauled his team back into contention.

Who will be happier after this game? Well Mohill will be much more confident with the return of Beirne in particular as despite some sterling work from Alan McLoughlin, Kennedy was left to carry the burden alone.

They will be concerned by a hamstring injury for Alan Armstrong that will test their vaunted resources but they know the battle for the Fenagh Cup is only beginning in the next month.

Ballinamore will be certainly happy with their victory and they have every reason to be - they have all the tools to take the title this year a have a young hungry team eager to build a winning legacy.

McGovern was superb but it was an impressive team effort with Shane Moran and Wayne McKeon impressing in midfield while Donal Feely in defence and  Paddy Connaughton in attack also impressed.

Ballinamore set their stall out early as Niall McGovern swept over after just 20 seconds and about 40 seconds later, Paddy Connaughton cleverly fisted over the bar. Ronan Kennedy opened Mohill’s account after an Alan McLoughlin pass but Wayne McKeon replied with a free.

Kennedy then scored an absolutely brilliant point as he twisted and turned to beat a couple of defenders on six minutes but Ballinamore were on a run and a 40 yard Peter Reynolds free was followed quickly by points from McGovern and Shane Moran.

Peter Reynolds and McGovern added further points so that by 15 minutes, Ballinamore led by an incredible 0-8 to 0-2 and they were unlucky when Keelan McHugh shot into the side netting and McGovern lost his composure as he blazed a goal chance wide.

Those misses seemed to inspire Mohill and Oisin Madden got the fightback under way with a fine points before Ronan Kennedy took over with three points in as many minutes, two from frees.

The third Kennedy point was actually a wasted opportunity as Mohill worked the ball to the sharpshooter in front of goal but he opted for too much power and blazed over in an incredible miss.

Wayne McKeon put over a long range free but Kennedy finished the half with another spectacular point to leave Ballinamore 0-9 to 0-7 in front at halftime, O’Heslin’s quickly extending the lead when McGovern caught, turned and scored in the one movement.

Mohill started to hit costly wide with three either side of another Kennedy point and they lost Alan Armstrong to injury and it proved costly as Ballinamore benefited from what looked like bad luck when a McKeon free hit the post. Fortunately for them, the ball fell right into the lap of Niall McGovern who blasted to the net from close range.

Mohill reduced the gap to a goal with a Kennedy free and a brilliant James Mitchell score after a great run but the gaps were beginning to appear and another monster McKeon free was followed quickly by two Niall McGovern frees to put the game beyond reach.

Padraig Tighe saved well to deny Barry McGovern a goal and Kennedy swept over two more points as Mohill should have found the net when Fiachra McGuinness found Kennedy in behind the defence but he pulled his shot wide.

Paddy Connaughton pointed to complete Ballinamore’s tally while they lost sub Philip Murphy to a black card. Mohill had the chance of one more goal when they appealed for a penalty after a tackle on Ronan Kennedy, the ball breaking to Fiachra McGuinness but the youngster shot wide.

Main Man: A clear contest between Niall McGovern and Ronan Kennedy, Both were unmarkable and absolutely key to their team's chances while there were strong displays from Wayne McKeon & Ronan Gallagher.

Talking Point: Ballinamore Sean O'Heslin's lay down a serious marker here and all without Dean McGovern. They looked sharp and hungry and in Niall McGovern, they have a real potent attacking force. Mohill too can take a lot from this game as they started atrociously and put themselves in a six point hole they never recovered from. Lots to ponder from both teams so don't rule out another meeting further down the road.

Ref Watch: Eamon O'Grady did a solid job, kept the game flowing. Might have penalised one or two players a bit more heavily.

Highlight: Some of the points scored by Ronan Kennedy, under immense pressure from the Ballinamore defence, were simply breathtaking and a joy to watch.

Lowlight: The absence of so many  key players, Dean McGovern for Ballinamore, Keith Beirne & Shane Quinn for Mohill, robbed us of a potential blockbuster.