Glencar/Manor knock out champions amidst controversy over added time 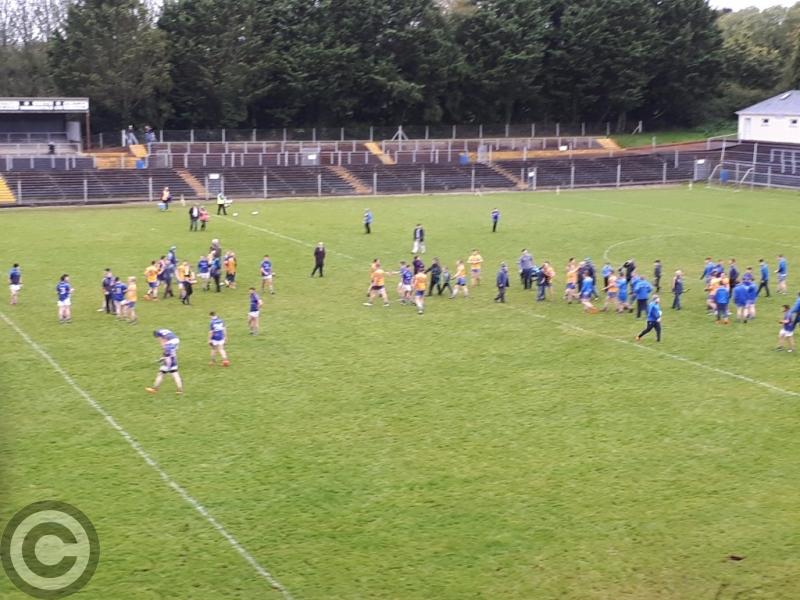 Glencar/Manor and Aughawillan players pictured on the field

County Champions Aughawillan saw their reign ended by Glencar/Manorhamilton on Saturday in Pairc Sean Mac Diarmada but not without controversy as the game appeared to end prematurely.

Glencar/Manor, beaten finalists last year, recovered from a four point deficit early in the second half to win 0-14 to 1-8 with a faultless display of placekicking from Aaron Hickey leading the way.

But the result will be overshadowed thanks to another timing controversy. In the drawn game, Aughawillan supporters were incensed that the announced added time was exceeded.

With two minutes left in normal time, the board went up announcing four minutes of added time but referee Seamus Mulhern blew time with approximately 90 seconds left on the clock as Aughawillan were desperately seeking an equalising goal.

Aughawillan had looked in control in the first half, a superb Gary Plunkett goal the highlight but the champions should have been further ahead had Sean Fox and Gary Plunkett taken two great chances while James Glancy was denied a contender for goal of the year by a simply superb Colin Maguire save.

Leading 1-5 to 0-5 at the break, Aughawillan stretched their lead to four points but a run of seven Manor points to only one from Aughawillan saw Glencar/Manor turn this game on it's head.

The north Leitrim men appeared to be holding out comfortably but the controversy over timing will detract from a superb result for last year's beaten finalists.