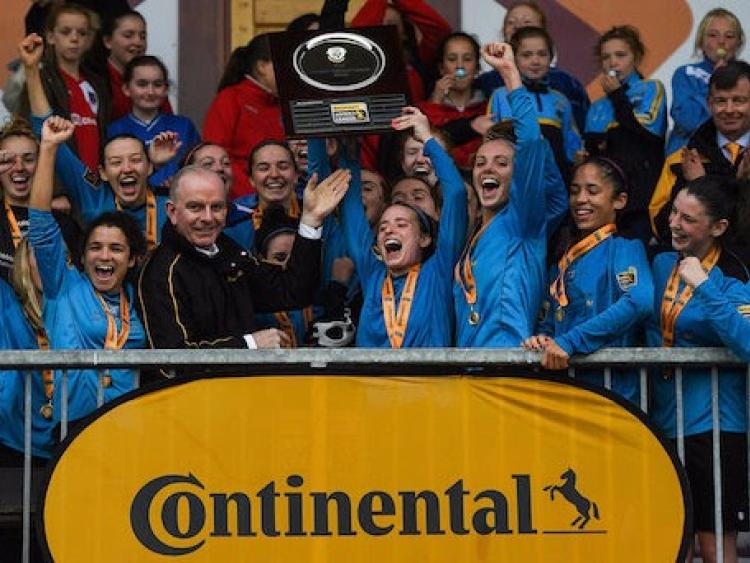 There was plenty of Leitrim interest in Saturday's game with Mohill's Dearbhaile Beirne playing up front for UCD Waves while the game was refereed by Manorhamilton's Emma Cleary.

Ellie O'Flaherty put the home ahead but goals from Catherine Cronin and Kerri Letmon sealed the come-back 2-1 victory for Noel Kealy's side.

It started so well for the home side after they went ahead through O’Flaherty in just the second minute of the match The Galway midfielder chased down Brooke Dunne’s clearance to block the ball and round the keeper to put the ball into an empty net.

Galway continued to enjoy most of the possession as the half went on, and an early change to their defence did not deter them, as recent Rose of Tralee winner, Jennifer Byrne, came on for the injured Keara Cormican in the 12th minute.

Eventually, UCD Waves started to get a hold in the match and equalised with six minutes remaining in the first-half. Emily Cahill's free-kick forced a great save from Tina Hughes. Dearbhaile Beirne and Chloe Mustaki followed up, but Galway cleared, only as far as Catherine Cronin who drove the ball home.

After the break, Aislinn Meaney won the home side a penalty after a burst into the area on the right and Ally O'Keeffe brought her down. Aoife Brennan stepped up but hit the post from 12-yards, a chance Galway will regret missing in the 57th minute.

The game developed into an end-to-end contest as Cronin almost added a second as UCD captain Chloe Mustaki found the energetic winger but her fierce effort was well saved by Hughes.

With five minutes remaining, UCD Waves secured the Continental Tyres Women's National League Shield. Player of the Match Mustaki played an excellent through-ball to Kerri Letmon and her shot was parried into the air, and looped into the net to seal the title.

Speaking after the game, UCD Waves captain Chloe Mustaki expressed her delight: “It was a tough game out here in the rain. All the girls gave it absolutely everything and in the end we got what we deserved.

"We really showed the league what UCD Waves are about. The ball was slippy. You had to concentrate more than usually which all of us did as best we could and in the end, we got what we wanted.”

“At the start we were a bit jittery. We decided to sit off at the start but then we realised, you know what, this game is for the taking."

UCD Waves manager Noel Kealy commented: “We have that ability to change from a defensive situation and then switch it around and maybe change the point of attack and move the ball around.

"We work a lot on that. We switched the point of attack to the middle and in the end it was one through the middle over to Kerri that got the goal. I’m really pleased with the way they played today and the way they were stood up and were counted.”