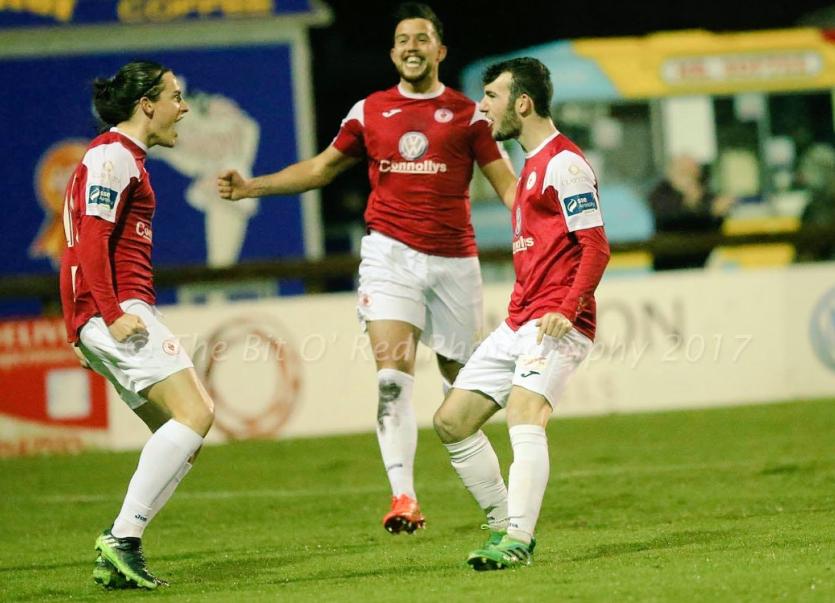 Sligo Rovers will bring their 2017 SSE Airtricity League Premier Division campaign to a close tonight knowing that a point away to already relegated Drogheda United will be enough to secure their top flight status for next season.

Manager Gerard Lyttle has overseen an impressive turnaround in recent weeks with last week's 3-0 victory over Derry City at The Showgrounds ensuring Rovers would have their destiny in their own hands ahead of the season's final round of games.

In gale force conditions the home side took an early lead against Derry City courtesy of a Rhys McCabe goal, which was scored directly from a corner.

The lead was doubled when Vinny Faherty, a mid-season signing from Galway, was the quickest to react after Derry goalkeeper Ger Doherty spilled a shot from Tobi Adebayo-Rowling and Faherty forced the ball home from close range.

This goal had everything. A @tobi_adebayo left footed strike from outside the area, a @vinnyfaherty's striker's finish and Mo celebrating pic.twitter.com/SGBfTSx1QV

A 2-0 interval lead would normally be enough to settle nerves but given the strength of the wind it was unclear if the two goal advantage would be enough for the Bit O'Red.

However, they produced an excellent display in the second half and secured all three points in the closing stages when Craig Roddan capitalised on a defensive lapse.

Craig Roddan topped an inspirational performance with his first goal for the #bitored. pic.twitter.com/L0TJJBnwRR

Rovers will be without midfielder Roddan as well as left-back Regan Donelan due to suspension for tonight's game in Drogheda. With Drogheda and Finn Harps already relegated one of Sligo Rovers, Galway United or St Patrick's Athletic will join them in next season's First Division. A draw for Sligo Rovers will be enough to secure their top flight status and the same is also true for St Patrick's Athletic. However, should either of them slip up, Galway United will be hoping to leapfrog them with victory over Dundalk.