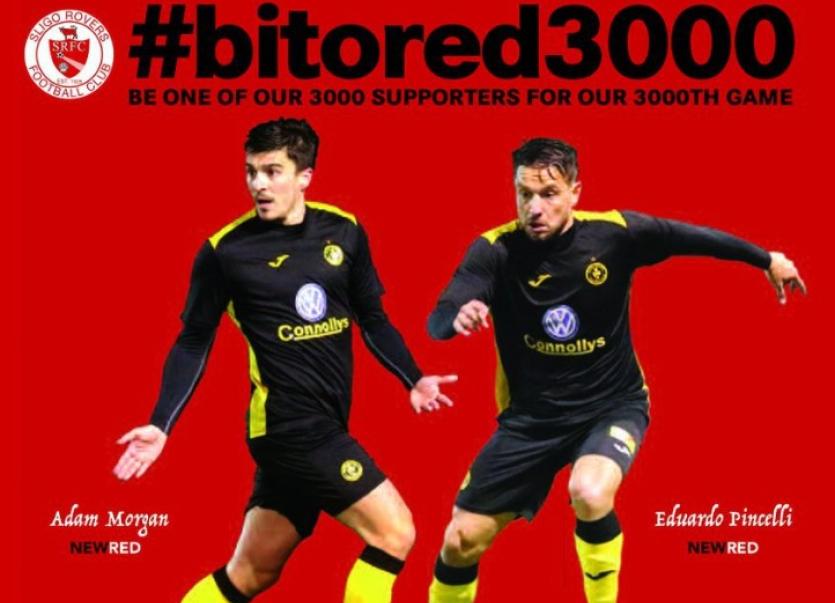 With the new SSE Airtricity League Premier Division season just under two weeks away, Sligo Rovers have issued a rallying call to supporters across the region to make their way to The Showgrounds for the season opener against Limerick on Saturday, February 17 for what will be the club's 3,000th competitive game.

Sligo Rovers are hoping to have at least 3,000 supporters present for the landmark fixture - the 3,000th competitive game since its formation.

With the pre-season preparations almost fully behind them and anticipation building for the big kick-off, Sligo Rovers' manager Gerard Lyttle has confirmed he is still hoping to make further additions to a squad which has already been bolstered by some very exciting new arrivals.

Among the new faces Bit O'Red supporters can look forward to seeing at The Showgrounds are former Liverpool forward Adam Morgan and Brazilian midfielder Eduardo Pincelli.

Speaking to the Sligo Rovers website about potential new signings Gerard Lyttle said, "We’re hoping to get one or two done this week. We’ve been close and at the last-minute one or two have just not happened and that’s very frustrating.

"But as has been said throughout, it’s not easy to get players in and it was always going to take time. That has been the experience throughout the off-season.

"In an ideal world we would have our squad complete now but we have to get on with it. The last additions are very important and we’ll look to make them in the next few days."

The pre-season preparations have been slightly disrupted by the bad weather with tonight's scheduled friendly against Athlone called off.

POSTPONED: Tuesday night's friendly with Athlone Town will not take place due to an unplayable pitch in Athlone.

Next game is this Saturday in The Showgrounds vs Cabinteely at 3pm. pic.twitter.com/YJ66aWFztj