32 County Marathon bid to take in Leitrim in August 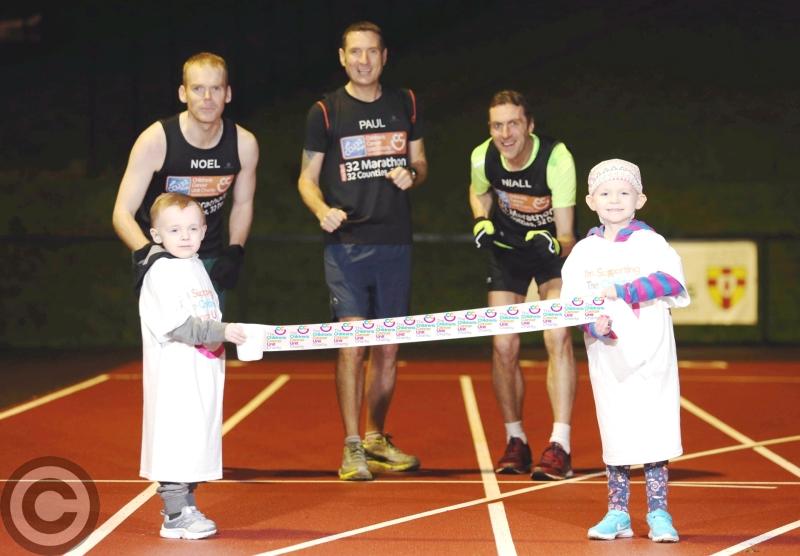 Noel McNally, Niall Farquharson and Paul Tyrell are joined by Erin and Zach who are both receiving treatment at the Children’s Cancer Unit Charity centre

Three runners from Belfast, Noel McNally, Niall Farquharson and Paul Tyrell, will be in Leitrim on Wednesday, August 15, and will join up with Mohill & District AC to complete day 14 of their 32 day challenge.

The three members of Beechmount Harriers club in Belfast will be around the area a lot as they criss-cross the country - on August 14, they run a marathon in Cootehill and the day after their Leitrim run, they run in Fermanagh.

On August 21, they won’t be too far away either as they complete their Roscommon marathon in Lough Key Forest Park while Sunday, August 26, they take part in the very popular Longford Marathon having run full marathons in Offaly, Clare and Galway in between.

They also have full marathons in Sligo and Donegal so the challenge is quite a logistical challenge one that Noel McNally is all too aware of - ““I know it sounds a bit crazy and there are a lot of logistical things to get organised, and that’s all before we pull on the runners and start the first marathon in few months time.

“But on August 15, in county Leitrim, we know that we can call on the support of various running clubs, like the Mohill and District Athletics Club, as well as members of the wider running community throughout the county.

“We will be relying on these local volunteers to marshal our routes, time the runs and most importantly to join us for a day, even it is for a few miles, a half marathon or the full 26.2 miles. Myself, Niall and Paul are committed to raising as much money as we can to support the work of the Children’s Cancer Unit Charity.

“We all know someone who has been affected by cancer and we know the amazing work undertaken by the staff at the unit. If we can help the Unit to support the families who desperately need that help, then all the better.

“We wanted to find a challenge which is different, captures the imagination and allows for hundreds of people to have fun and take part along the way. This is what we have come up with and we hope that the people in Leitrim will support us. I am sure they will.”

The, pun intended, marathon effort is to raise funds for the Children’s Cancer Unit Charity to help children like Erin and Zak, both pictured. They are calling on various running clubs across Leitrim to volunteer in support of such a good cause.

The adventure will begin on the August 2, in Derry, andthe finishing race, all being well, will take place in Ormeau Park in Belfast, with the runners joining in on the Laganside 10K on Sunday September 2.

The haematology unit in the Royal Belfast Hospital for Sick Children is the Regional Centre is for treating children with cancer, and it is the only place within Northern Ireland where children can receive their much needed treatment. Noel McNally explained why the trio are taking on the unique challenge.

Jacqueline Wilkinson from the Children’s Cancer Unit Charity was on hand to wish the trio well on behalf of the charity - “We get fantastic support every year from fundraisers who really do take on some amazing challenges. This is one of the hardest I have heard of and I admire the lads for taking on this massive task.

“The Regional Unit currently caters for around 200 young patients each year, while up to 70 new cases of childhood cancer are diagnosed in Northern Ireland annually. We support the work of the Unit and the families of children who are receiving treatment.”

The CCU32 challenge begins on August 2, in Derry and makes it way across the island of Ireland over 32 days. Local runners in Leitrim are encouraged to join in on the 15th of August. Details of the event and how to support the initiative can be found at www.http://ccu32.com/ and donations can be made via https://www.justgiving.com/fundraising/ccu32